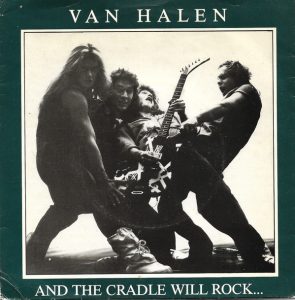 Yeah, I know that their debut changed everything, and 1984 contains some of their most beloved songs, but for me, Women and Children First — the album where they pretty much eschewed the pop influences that dominated the first two records and started completely fucking with their song structures — that’s the one I love the most.

It’s just a weird record — the kind of record where you earned the right to do whatever you want, so you. Including Eddie Van Halen branching out by sticking an electric piano through a flanger and running it through through a Marshall amp so that guys like me think that it’s just a cool-sounding guitar for decades.

To be fair, there weren’t any instrumentation credits on the album, and it really sounds like a fucking guitar. In any event, that piano riff is the anchor for the utterly massive teenage rebellion song that opens up the album with a weird thundering riff.

David Lee Roth is singing that with the piano in one speaker, Eddie Van Halen is playing the main riff in one speaker and in the other throwing in guitar asides while Michael Anthony and Alex Van Halen are tunneling through the earth. Then they all shut it down for a second, while the thunder riff drags them into the chorus, David, Michael and Eddie all singing.

After the second chorus comes one of the most iconic moments in all of Van Halen: Eddie does a quick solo while the rest of the band breaks the song completely down, at which point David Lee Roth summons his most angry dad voice to say:

HAVE YOU SEEN JUNIOR’S GRADES?!?!

It’s both utterly stupid and wonderfully hilarious, and leads to a fantastic solo by Eddie, all lighting and fireworks and bombs bursting in air after which they eventually get to the third verse, which is essentially the same as the second verse.

And when some local kid gets down, they try and drum him out of town
They say, “You coulda least faked it, boy.”
(Faked it, boy)
At an early age he hits the street and winds up tied with who he meets,
And he’s unemployed
His folks are overjoyed

After that, as Alex Van Halen double-times his snare, everybody screams “rock on” and Eddie throws some more crazy-ass guitar, “And The Cradle Will Rock…” lurches into its fade, no doubt leaving a trail of destruction in its wake.

As the first single from the third Van Halen album, you might expect “And The Cradle Will Rock…” to get some love from the singles-buying public, but instead, it crapped out at #55, which was still better than the Van Halen II singles not called “Dance The Night Away” (“Beautiful Girls,” and “Somebody Get Me A Doctor,” for those of you keeping score at home), but not as good as one might hope.

That said, that a song this big and weird and metal charted at all was probably a miracle. For me, it was just the opening salvo of an album that ended up blowing me away, even though by the time I bought it, my favorite bands were The Clash and The Jam.

“And The Cradle Will Rock”