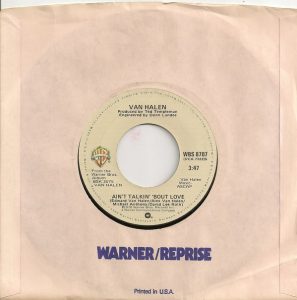 The first time I saw Van Halen was September 22, 1978 at Selland Arena in Fresno. They were opening for Black Sabbath.

Yes, it was Black Sabbath as a dead band walking, touring on the soon-to-be released ironically Never Say Die!, and the general consensus was that Van Halen blew them off the stage, which I don’t remember happening, but of course at the time, I was a huge Sabbath fan, and just seeing Tony, Ozzy, Geezer and Bill play a shitton of classic songs was good enough for 15-year-old Jim.

Still I just want to say this again: I saw the original Van Halen open for the original Black Sabbath. (Yes, I’m old.)

Thanks to some maniacs at something called “Fresno Media Restoration” there is actual footage from that show, and I can say definitively that I saw Van Halen play the greatest song from their debut, “Ain’t Talkin’ ‘Bout Love,” an absolute dynamic whirlwind of a song.

“Ain’t Talkin’ ‘Bout Love” starts with Edward Van Halen crawling his fingers his guitar, playing little chunks of a riff, setting us up for the main riff, which is a monster, and like a lot of his best riffs, plays call-and-response with itself, even while he tosses little asides. Most of “Ain’t Talkin’ ”out Love” (a title in which apostrophes do a lot of work) is based around variations of that riff.

I heard the news baby
All about your disease
Yeah, you may have all you want baby
But I got somethin’ you need, oh yeah

Finally — four songs in — David Lee Roth is singing about his great subject: fucking! He was always a better interview than he was a lyricist (of course he was always one of the greatest interviews), but there was always something fun about his lyrics, a bit of piss-taking, like he understood that the words were there to enjoy the music, not the other way around.

Meanwhile, Eddie, who has been playing quietly underneath the verse, kicks up the roar on the chorus, which is an instantly memorable powerhouse.

And while on “Running With The Devil” Roth doesn’t actually sing on the chorus, this time he right there with Eddie and Alex as they all scream “ain’t talkin’ ’bout love” together. It’s just so much fun.

You know you’re semi-good lookin’
And on the streets again
Oh yeah, you think you’re really cookin’ baby
You better find yourself a friend, my friend

What was it I said about Roth’s lyrics, because this is a pretty good one: “semi-good lookin'” just rolls out of his mouth and I love the “my friend” at the end.

And then there’s the guitar solo: swirling out of the sky, a massive hook at first, and then sliding underneath the song at the end. Eddie said that he doubled it with an electric sitar that the didn’t know was a sitar, and that makes the whole thing a little bit off. But really cool, too.

Also really cool, the breakdown in the middle, where Eddie arpeggiates the riff Roth throws out some posture.

When Roth is singing “bleed, baby,” it’s a great exercise in band dynamics as Michael Anthony and Alex Van Halen both come hard, while Eddie bounces his guitar off of them, providing comment until the song comes roaring back.

After another guitar solo, identical to the first, natch, “Ain’t Talkin’ ’bout Love” replaces its incredibly catchy chorus with even catchier chant “hey! hey! hey! hey!” followed by the riff because they knew they’d be playing arenas if not stadiums in the near future, and they wanted to have a moment where the entire crowd was screaming “hey hey hey hey” back at them.

After that, there’s some nice Alex Van Halen round-the-kit fills which bring this tremendous song to its close. One of the things I’m struck by here is the absolute and utter confidence that fills every single ounce of “Ain’t Talkin’ ’bout Love,” like they knew in their cores that they had a song people would still be raving about over 40 years later.

Fast-forward a dozen years or so, and “Ain’t Talkin’ ’bout Love” is the last song that the very original incarnation of Sedan Delivery ever learned, because we all loved Van Halen and also so somebody could make the joke “Sedan Halen” onstage. In any event, I’m both incredibly happy and kinda said I don’t have the tape of that show anymore.