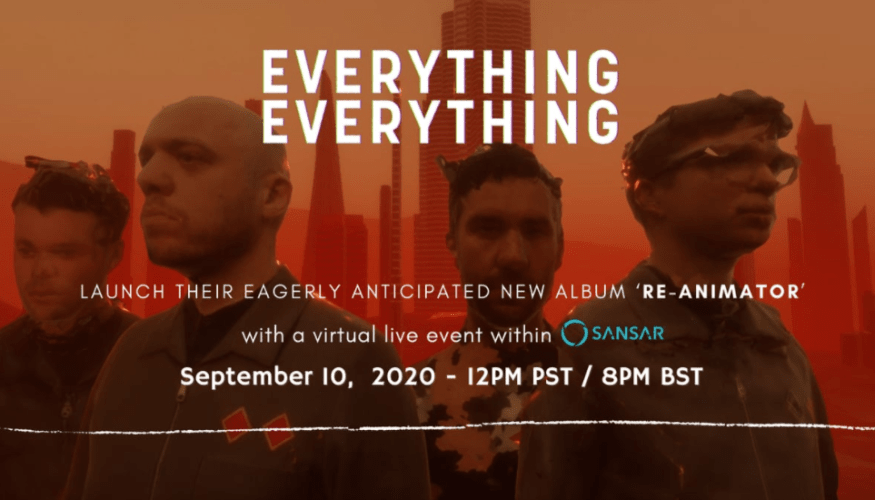 Launching a new album in the Covid-era has sent many artist teams scrambling back to the drawing board now that the traditional nationwide tour isn’t possible. Unsurprisingly, VR is a common starting point, and British band Everything Everything are performing two VR live shows on September 10th and 11th in support of their new album Re-Animator.

It’s worth keeping an eye on events like these as the live industry rejigs itself in the wake of Covid, and  figures out how much can be charged for livestream gigs, what type of virtual experience fans actually want, and how interactive they want them to be.

Access for Everything Everything’s launch shows is wide-ranging and multi-tiered: pretty much any modern VR headset can be used to join in the fully immersive version of the gig, created in collaboration with Sansar, the VR social platform. Laptops and mobile phones will work too, albeit without quite so much interactivity. And the band are also streaming the first song of the set on the band’s Twitch page, so that the curious can check it out, perhaps before upgrading to a full ticket.

Everything Everything’s approach follows the tried-and-true formula of fans paying more for extra connectivity. The band are selling two tiers of ticket: General admission at $12 or VIP access at $25, which includes a VR meet-and-greet with the band. In the future, artists may start to offer extra-pricy options for the “whales” – the tiny percentage of big-spending mega-fans.

This period, as analyst Cherie Hu explores at length in her latest newsletter, shows the fragmentation that exists as livestreaming has it’s “moment.” There’s many competing platforms, and discovery is only starting to be addressed by companies like OnNow•tv – so there’s possibly a lot of consolidation to come.