Another Trump Tweet Removed But This One Has a $150,000 Copyright Lawsuit Attached | TorrentFreak

For the overwhelming majority of Twitter users, receiving even a very small number of copyright complaints against their account can mean its loss, with Twitter invoking its repeat infringer policy to avoid liability under the DMCA.

For US President Donald Trump, however, special treatment is available on the platform. While contentious tweets do get removed, Trump’s account remains intact, despite a steady stream of rightsholders filing DMCA notices.

Yesterday, however, one of his allegedly-infringing tweets resulted in more robust action.

With the 2020 United States presidential election campaign in full swing, Trump is taking every opportunity to paint Democratic opponent Joe Biden in an unfavorable light. These political attacks often take place via Twitter and last month Trump kept up the pressure, posting an animated video of a speedy train carrying his campaign logo ahead of Joe Biden on a railroad handcar, struggling to keep up.

While that kind of imagery is nothing new in US politics and seems to have been custom-created, the background music in the video – the 1982 hit ‘Electric Avenue’ by British singer-songwriter Eddy Grant – was a previously-existing work. In fact, according to a lawsuit filed by the artist in a New York court yesterday, the use of the track was an act of blatant copyright infringement.

The complaint, filed in the Southern District of New York, has Edmond Grant, two companies named Greenheart Music Limited (one based in the UK, the other Antigua, both owned by Grant) suing both Donald Trump and his campaign, Donald J. Trump For President Inc.

The complaint states that after Trump tweeted the video on August 12, the next day Grant and Greenheart Music sent a letter to the defendants demanding the removal of the video and insisting that they refrain from using Electric Avenue moving forward.

The lawsuit further alleges that at the time of its filing on September 1, the video was still available on Twitter. This is curious since according to information published by the Lumen Database, on August 13 Twitter received a DMCA takedown notice from Sony/ATV Music Publishing demanding the removal of the tweet.

It has now been actioned with the offending tweet being removed, but Lumen only received a copy from Twitter today, perhaps suggesting something unusual with its processing. 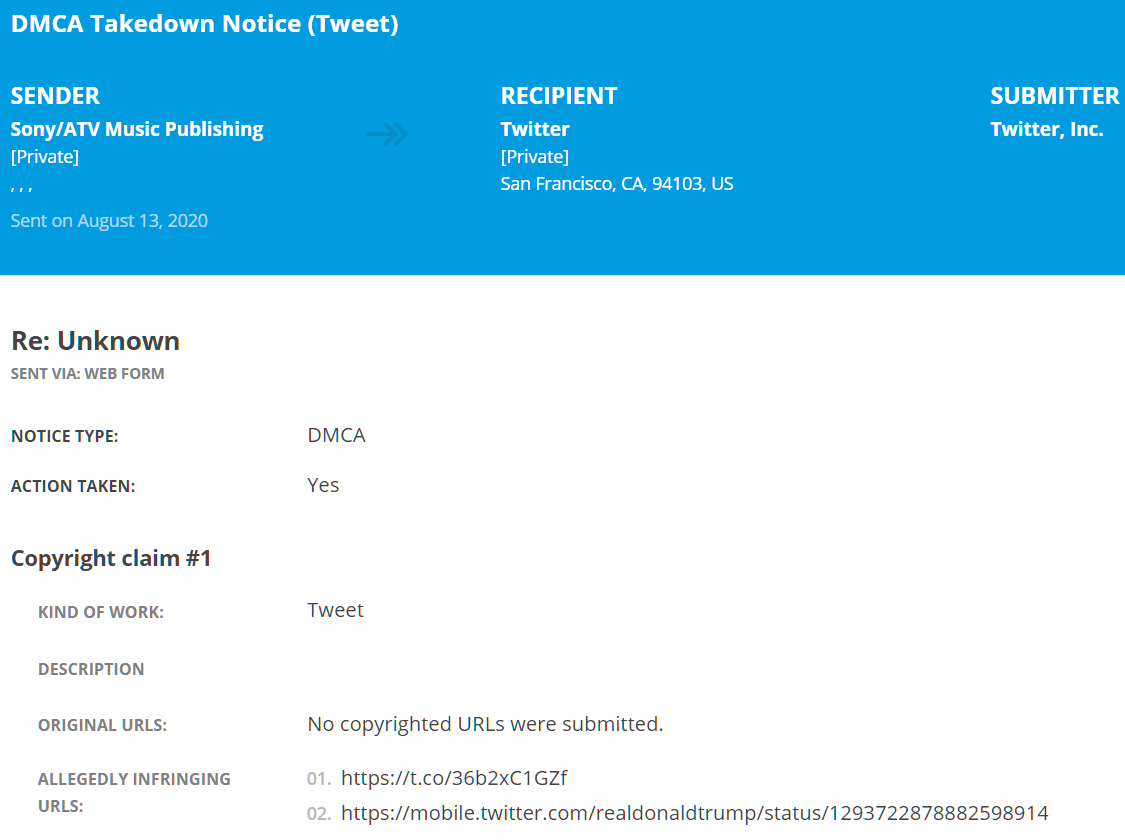 “Defendants’ conduct is unlawful; it is proscribed as such by the United States Copyright Act. Neither the President nor the Company is above the law,” it adds.

According to estimates presented by the plaintiffs, the video has been viewed more than 13.7 million times, “liked” more than 350,000 times, and re-tweeted 139,000 times. This, despite Trump and his campaign being put on notice via an August 13 letter sent by Grant’s attorney to cease-and-desist their infringing conduct. 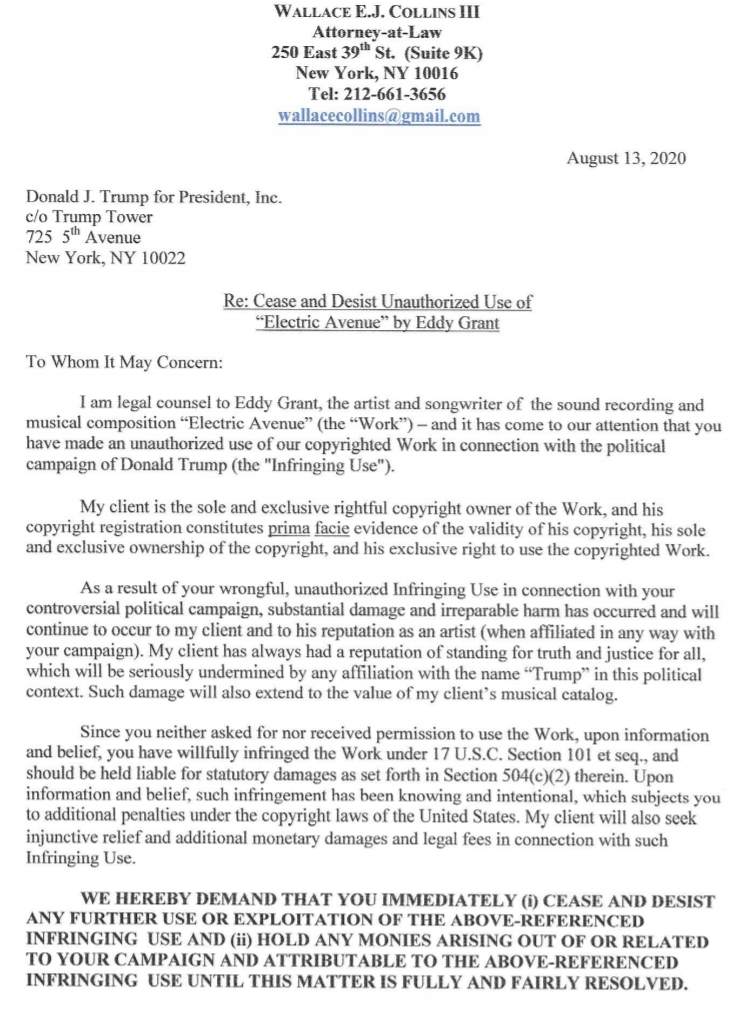 Describing the actions of Trump and his campaign as “willful and intentional”, the lawsuit demands a permanent injunction to prevent further infringement plus a damages amount to be determined at trial.

Interestingly, the cease-and-desist sent by Grant’s legal team on August 13 offered to settle the matter quickly, in order to avoid the relatively expensive option of a lawsuit. Whether that option remains on the table is unclear but from its text, it appears that Grant was personally upset, not just by the alleged infringement of Electric Avenue, but also by the context in which it was used.

Electric Avenue was written by Grant in response to the now-historic riots that took place in Brixton, London, during 1981. They were widely attributed to racism, poverty, and tensions between black youths and the mainly white police force of the time.

The cease-and-desist sent by Grant’s team in August suggests that the use of Electric Avenue in the Trump campaign video “indicates a fundamental misunderstanding of the very meaning of the underlying work” and notes that just by being affiliated with Trump’s campaign, Grant’s reputation is being damaged. As a result, a large response could follow.

“If you know my client’s reputation then you know that this Infringing Use in connection with the name ‘Trump’ in a political context is a serious transgression and could subject you to upwards of $100,000,000 in monetary damages,” the letter warned.