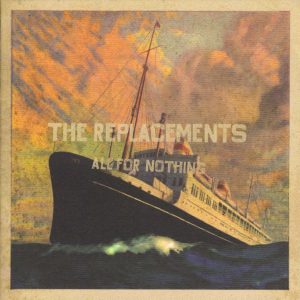 I’ll be sad in heaven

The question was always going to be which version of “Can’t Hardly Wait” would I write about. I first heard it as the highlight as The Shit Hits The Fans, the cassette-only live album which documented one of their disintegration shows.

After that, of course, it was the final song on Pleased to Meet Me, all tarted up with horns and strings, a production move that still pisses people off, but I loved. And — SPOILER ALERT — will be writing about in a couple of weeks, at which point “Can’t Hardly Wait” will join the rarefied ranks of “Tonight’s The Night” and “Bad Day:” songs by artists where there are two disparate versions I love so much I refuse to choose between them.

Of course, I didn’t know any of this in 1987, so I fell in love with the “Can’t Hardly Wait” that I got, because it’s fucking irresistible in any form. It wasn’t until the mid-1990s, when I got online and made friends other ‘Mats fans from across the country, that I discovered that there were other versions floating around out there. Apparently Alex Chilton had produced a demo session, which included two versions of “Can’t Hardly Wait”, including the then-legendary “air shaft” version.

That said, I was still fully unprepared for the version — produced by Tommy Erdelyi as part of the main sessions for Tim — that led off 1997’s odds and sods collection, Nothing For All.

With Bob Stinson playing the guitar hook like a champ and a different set of lyrics that kinda presaged the suicidal kid in “The Ledge,” the Tim version of “Can’t Hardly Wait” is pretty fucking great.

With a faster tempo and a two-guitar attack, the Tim version of “Can’t Hardly Wait” is probably closer to the platonic ideal of The Replacements than any other version, and had it been placed on Tim — let’s say on side two, instead of the Aerosmithy “Lay It Down Clown” — it would have been amazing.

And while we’re at it, let’s replace “Dose of Thunder” with “Nowhere is My Home” and boom!, Tim is the greatest album ever made, not Let it Be. I mean, how could you beat this:

But, of course, none of that happened — at least in our universe, which is the shittiest of all universes — because Paul didn’t like this version of “Can’t Hardly Wait,” and so it sat in the vault for over a decade.