In terms of sheer traffic, BitTorrent Database (BTDB) doesn’t rub shoulders with The Pirate Bay and RARBG but with seven million visitors per month, it’s certainly no slouch.

The site began by allowing people to search BitTorrent’s Distributed Hash Table (DHT) but has more recently allowed users to upload their own torrents into categories including movies, TV, music, games and others.

According to its search engine there are more than 27.6 million torrents to choose from but this week, completely out of the blue and literally overnight, the site’s traffic dropped by 90%.

At least initially, the site’s operator thought that some kind of ISP blocking might have struck his site but when other techniques to access his main domain at BTDB.io failed, attention turned elsewhere. Indeed, after running a closer check on the domain in question, the problem soon became apparent. 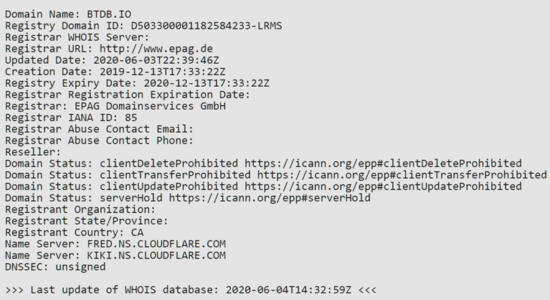 According to ICANN the serverHold domain status is something people shouldn’t come across very often but, when it appears, it’s usually the result of “legal disputes, non-payment, or when your domain is subject to deletion.”

Domains such as BTDB.io are assigned to the British Indian Ocean Territory and administered by the Internet Computer Bureau. In this case the domain was registered via Njalla, the domain privacy company associated with former Pirate Bay spokesman Peter Sunde. However, neither BTDB’s operator nor Njalla were informed of any issues before the domain was suspended.

A support email seen by TorrentFreak shows a Njalla team member explaining the serverHold status code while confirming that it had been set by the registry. Njalla had no idea what the BTDB.io domain was being used for but did offer to try and find out what the issue was. At the time of writing, BTDB’s operator is still in the dark.

Given the nature of the platform, however, it seems possible that some kind of copyright dispute could be the underlying reason for the suspension. Google reports that 1,387 copyright holders have filed DMCA notices targeting 235,806 URLs on the BTDB site, meaning that there is no shortage of suspects when it comes to considering who may have thrown a spanner in the works.

The top notice-senders are all very well-known too, including the BPI, CBS, Disney, BREIN, and the RIAA, although at this stage there is no suggestion that any of these are responsible for the issues.

While BTDB’s .io domain is currently out of action, its alternative BTDB.eu domain is still operational. The underlying BTDB site is currently restoring its database but should be fully functional at that URL moving forward.