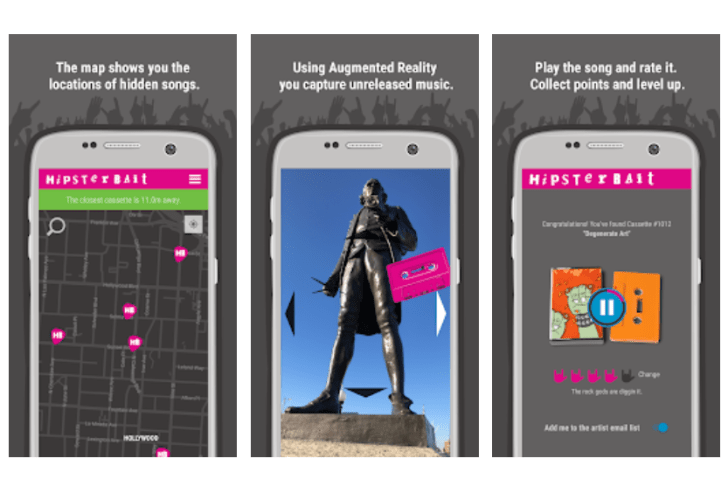 “Unreleased rock songs are hiding all around North America. That’s right. You could be sitting on a song right now,” is the blurb from new app Hipster Bait’s website. Launched for Android and iOS devices, it’s an “interactive rock’n’roll music discovery game” that uses augmented reality (AR) technology.

The idea: every week the company will ‘release’ exclusive songs from new artists, and place them (digitally) at real-world locations as virtual cassettes, which people using the app can collect by visiting those locations. It appears to be inspired by the ‘geocaching’ hobby, as people can then ‘re-hide’ cassettes for other players to find.

On the discovery side, every track is anonymous for its first two weeks in the game: the idea being that people listen and review it without knowing who the artist is.

For now, it’s working in the Pacific Northwest region of the US, complete with one of the region’s famous execs – Bruce Pavitt of Sub Pop – as an advisor. “Superfans, the early adopters, are crucial to launching a band’s popularity. Hipster Bait encourages these fans to learn about emerging artists by gamifying music discovery,” he said in a statement.

Note, this is rock music only – “You want (fill in the blank music)? Cool. Those platforms exist and are already waiting for you. Knock yourself out,” explains the site.