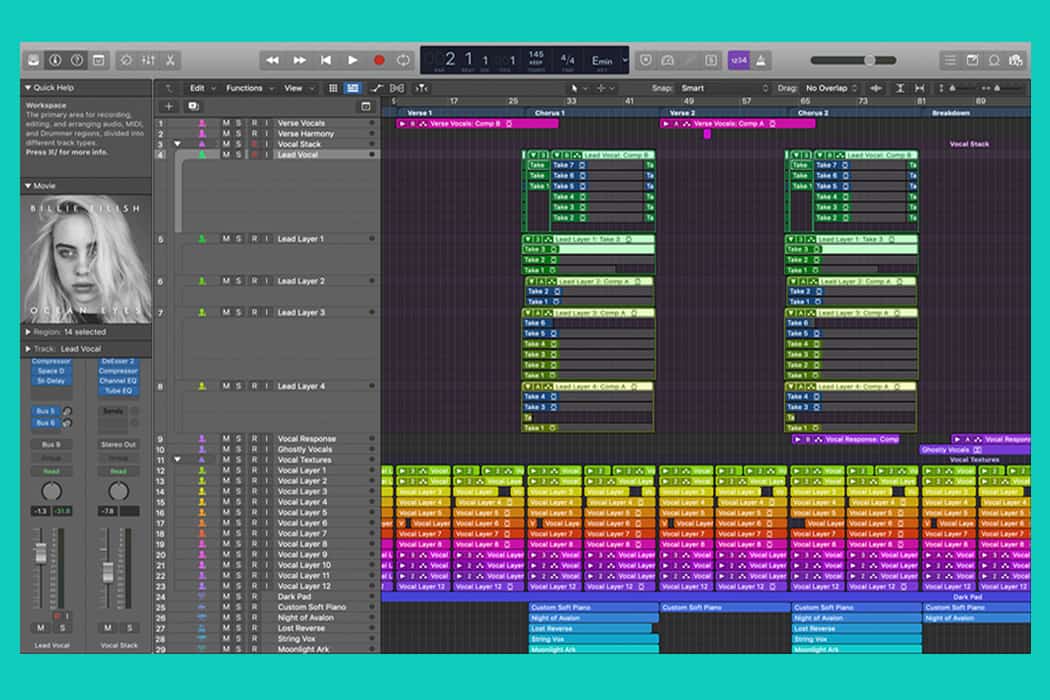 Guide To Unmissable Highlights of the New Logic Pro X 10.5

As many in the music industry may already be aware, Apple recently dropped a new version of Logic Pro X. Here, Sirma Munyar breaks down some of the major highlights in this latest edition.

If you’re a Logic Pro X user, you probably know about this already, but if not, drop what you’re doing: Apple has just released the latest version of our beloved DAW!

But this is not like the other updates we have seen since the release of Logic Pro X. The 10.5 Edition is packed with new features we’ve all been waiting for and a wide selection of kits, loops, and samples to boot! Let’s unpack all of my favorite updates, shall we?

But first, we absolutely must remind you that Soundfly’s got a wonderful in-depth online course that teaches all the ins and outs of Logic Pro X, that you can either take at your own pace or with the help of a professional music production mentor every step of the way. Check out our mentored online course here!

We have been waiting for a drag-and-drop style sample-based synthesizer for a very long time. Lucky for us, Apple has given us not one, but two!

The Quick Sampler is great for designing sounds based on a single sample. It contains a few audio editing tools as well as a Recorder button, which allows you to record samples directly into the Q-Sampler. The input of the Recorder can be set to anything you are able to record into the Logic session itself; audio or MIDI!

I’m really glad the Q-Sampler exists, because sometimes all you want to do is create an instrument out of one sample that you extensively edit and alter. The Q-Sampler’s user-friendly, clear-cut display is perfect for that.

The Sampler, on the other hand, allows you to combine as many samples as you want by assigning them to different keys, or the same keys, if that’s your wish!

It’s a powerful instrument with many unique features. For one thing, it’s so easy to drag and drop different samples on the keyboard and map them in whichever way imaginable in a matter of seconds. Secondly, it allows you to reverse, and loop forward or backward as well as alternate, which opens up a lot of doors for elongating and sculpting transients.

Another special feature you can find in both Q-Sampler and Sampler that I’m personally very grateful for: the Follow Tempo button. You know how the sample gets faster as it gets higher, and slower as you play it in lower octaves? The Follow Tempo button combats that issue with just one click!

The new drag-and-drop functionality in Logic is way more advanced than everyone thought it would be. In the Sampler, you can load samples the way they are, or, you can select the Optimized option and let Logic get rid of silent regions in the recording and analyze the sample’s pitch for you, even if it contains multiple notes!

There are several powerful sample-based synthesizers on the market. I frequently use iZotope’s Iris 2, for example. But the Q-Sampler and Sampler excite me not only due to their practicality, but also the crystal-clear, easy-to-navigate design they both come with.

The Drum Machine Designer is the long-awaited alternative to Ultrabeat. Just like the Sampler and Q-Sampler, you can drag and drop the samples you want to play with your MIDI keyboard or sample pad right into the DMD. It’s that easy!

What’s more is that the DMD comes with a Q-Sampler built-in, which gives you more control over editing and re-designing individual drum samples.

The Smart Controls integration also deserves a mention here. You can control the parameters of each audio effect you insert on the channel strip within the Drum Machine Designer, even if they are third party plugins. If you want to build a kit from scratch, Drum Machine Designer’s Empty Kit is for you. But if you’re looking for a starting point, you can choose from over 70 different pre-made kits as well!

Everyone is thrilled about the new Step Sequencer, and rightfully so! Step Sequencer can be viewed at the bottom of the session just like Piano Roll.

What makes this addition really interesting is that you can use it for any MIDI instrument. The use of the Step Sequencer is not limited to the drum machines available in Logic. That being said, most producers will probably enjoy using this feature with the Drum Machine Designer more than anything else.

It should be noted that the Step Sequencer is more sophisticated than it looks. You can control the volume, velocity, octave and rate of each beat. There are various controls that can be automated within the sequencer.

My favorite? Note Repeat! Creating varying stutters with the Note Repeat control is so easy!

The Step Sequencer’s Pattern presets are extremely fun to play with, especially if you’re working with melodic MIDI instruments. You should also look into the Templates within the Step Sequencer, which allow you to experiment with different modes and scales with ease!

Here’s what a preset from Alchemy sounds like with a Sequencer pattern and Logic’s new Remix FX.Video Player00:0002:05

If you have any experience with Ableton Live, you’ll immediately think of the Session View when you check out the new Live Loops Grid View option in Logic.

Except, this feature is truly tailor-made for Logic users: not only does it allow you to record loops on the go, but it also gives you a chance to arrange them in the timeline of your choosing. You can create different multi-layered versions of your beat, play each of them back-to-back to audition, and transfer whichever combinations you like to the Tracks View to build the rest of your arrangement, which you can view right next to the Live Loops Grid.

I’ve always appreciated the way the Apple loop library was organized and displayed in Logic. But I think we can all agree that a lot of the loops and one shots in there were getting a little outdated.

Well, we’re in luck, because Logic’s new update comes with so many new sounds! Over 2500 new loops, 1500 new patches and more than 70 Drum Machine Designer kits, to be exact.

There are also 17 Live Loops Starter Grids. The Starter Grids will help you better understand the functionality of the Live Loops Grid. There are some great options in there to help train your ear as a music producer, but keep in mind that these are almost fully-arranged songs you’ll be diving into. My advice is to borrow the sounds you need from the Starter Grid templates and put your own twist on them, even if you’re just starting out and new to all this.

Say “Hello” to Music for Picture and Orchestral Templates

While the Music for Picture template provides a solid starting point for beginner-level film scorers, the Orchestral template is perhaps the most unique addition to Logic’s template collection to date.

It’s too soon to tell if Logic’s notation-ready template can compete with Avid’s Sibelius and Pro Tools combo, but it’s at least a step in the right direction.

One of the best things about this update to me is the new Quick Help window, which reminds me of Ableton Live’s Info View.

In the past, I never really wanted to turn on the Quick Help feature in Logic, because whenever I would turn it on, the information would appear right next to the cursor, which could be distracting. I’m so glad to see this is not the case in 10.5! The new Quick Help window is built into the Inspector: you can leave it on and glance at it whenever you feel the need to do so.

I’m really surprised that no one has really been talking about this one!

Billie Eilish and FINNEAS teamed up with Apple to share a demonstrative Logic session of Billie’s breakout hit “ocean eyes.”

And yes, her vocals are included in the session, which in my opinion is the best part. You can even expand to view and hear her various vocal takes! This is a great opportunity for producers at every level to dive in and learn.

The adapted version of the instrumental might sound a little lackluster on its own, but all the notes, the whole arrangement, is in there. This session will also be an eye-opener for instrumental producers who don’t know much about vocal production. Being able to solo each vocal layer and hear what it took to create those lush vocal harmonies in “ocean eyes” is a whole lot better than watching a video tutorial about it.