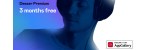 Chinese technology firm Huawei is a controversial company in the west, but it is still hugely successful globally, having shipped 240m smartphones in 2019 alone.

A trade ban with the US has meant the company can't preload Google's Android apps on those handsets however, so Huawei has developed its own 'AppGallery' app store as an alternative to the Google Play store.

Now streaming service Deezer is getting a promotional push on AppGallery by being designated a 'Hero Status' app. Deezer is also offering Huawei's customers a three-month free trial of its premium tier in Europe, Russia and Turkey.

Note: Huawei also has its own streaming music service, Huawei Music, and in April claimed that it had more than 160 million monthly active users, as it launched in 16 new countries in Europe.