What Indie Artists Can Learn From A Classical Conductor | Hypebot 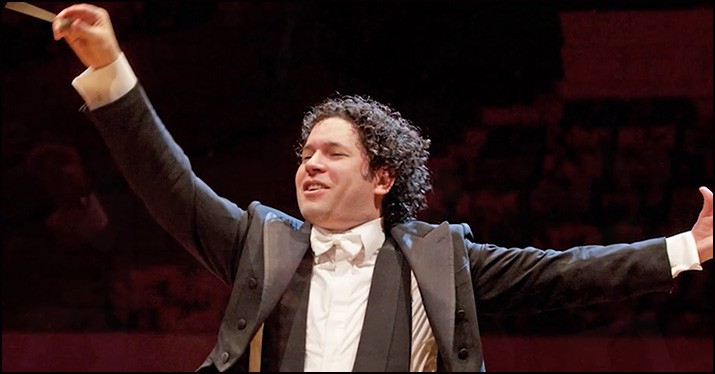 What Indie Artists Can Learn From A Classical Conductor

While indie and classical music are often thought to occupy different corners of the music world, certain principles and practices are universal when it comes to putting on a good performance. Here, we look at what indie artists can learn from the conduct of LA Philharmonic’s Gustavo Dudamel.

Guest post by Michael Gallant of the Discmakers Blog

LA Philharmonic’s Gustavo Dudamel embodies principles and practices that will benefit music-makers of any style and genre.

Not long ago, I had the privilege of watching Gustavo Dudamel, music director of the Orquesta Sinfónica Simón Bolívar and the Los Angeles Philharmonic, guest conduct the New York Philharmonic performing Dvorak’s Symphony No. 9 and other works. It was a wonderful concert.

If you’re not familiar with Dudamel, he’s widely regarded as a rock star in the classical world. He leads the Los Angeles Philharmonic, has won multiple international awards, and has a reputation as a powerful, intuitive, and deeply musical conductor.

After seeing him live, I can say that he lived up to that reputation. I also found his performance inspirational in a surprising number of ways that apply not just to classical, but to music-making in any genre or style. Here are a few observations we can all apply to make better music.

Give the music, and the musicians, room to breathe

Some conductors tend to drive orchestras like Formula 1 race cars, speeding them around turns and commanding them through amazing feats of virtuosity. Dudamel’s approach felt equally powerful, but far more collaborative. Instead of bending the orchestra to his creative will, he guided it gently, cueing and directing as needed to realize the vision of the music, but otherwise letting the brilliance of the ensemble shine.

Similarly, he brought both a strong sense of linear rhythm and a great deal of artistic flexibility to his work leading the ensemble. The tempo and intensity of the performance ebbed and flowed under his baton, all organically, so the music felt as though it were living and breathing, rather than simply reproduced with fury and mechanical precision.

For indie artists, the same lessons apply. When you’re working with other musicians, you’ll get the best results when you direct your collaborators as needed while giving them space to be amazing. And even if you’re working with click tracks or backing tracks, the more you can let your music breathe when it comes to tempo, feel, and intensity, the more likely it will be to connect with and move your audience.

Know the material front and back

For Dvorak’s symphony, which lasted for the entire second half of the concert, Dudamel conducted without a score. He had the piece memorized and clearly owned the material from the first note. By not having to check his music mid-performance, it seemed that he was better able to focus on leading the orchestra and creating a rousing, lively performance of the widely loved work.

In your own music, take the time to memorize, internalize, and thoroughly own the material you’re performing. There’s a comfort and confidence that comes from knowing your music front and back, and the less energy you spend trying to remember what notes or chords come next, the more you can focus on reacting to what your bandmates are playing, engaging with your audience, and just having fun.

Dudamel presented himself with a quiet and unassuming presence, yet he still commanded the stage, audience, and orchestra. Similarly, his gestures and cues were always enthusiastic but never excessive or overly showy. It felt like every wave of the baton was in service of the music and nothing else.

How did he pull this off? As best as I could tell, his gentle power came from the decades of practice, study, and experience that he brought to the stage along with the fact that he seemed to have nothing to prove.

If you come to the stage in your own gigs with confidence in your music, excitement at being able to share it with others, and no agenda other than creating something real and alive and awesome during your set, you’ll be well on your way to giving your audience a performance they will remember.

In other words, give your music-making everything you have. Beyond that, don’t try too hard.

For someone with rock-star status, Dudamel seemed surprisingly intent on sharing the glory.

When the audience gave him and the orchestra a standing ovation after the last note faded, Dudamel returned to the stage and stood deep amidst the violin section, taking his bows modestly with them, rather than standing front and center, where conductors normally bow to the audience.

When the audience called him back again and again with more applause, he took the opportunity not to bask in their admiration but to call out numerous individual orchestra members who had soloed during the performance, redirecting the applause towards them and away from himself.

And he only took his final bow when the entire orchestra rose to join him.

The takeaway for indie artists? Honor your fellow musicians and don’t hog the spotlight. Unless you’re performing solo, making music is a team sport and showing respect to your collaborators, both publicly and privately, can go a long way towards creating memorable and captivating performances.

What else can indie artists learn from classical conductors? Share your thoughts in the comments below.

You can learn more about Gustavo Dudamel at gustavodudamel.com and laphil.com.

Disc Makers’ regular contributor Michael Gallant’s debut trio album Completely received a four-star review from DownBeat magazine and a five-star review from Critical Jazz, which stated: “This, my friends, is the future of jazz. Fresh, invigorating, progressive – there are simply not enough positive adjectives to list here.” Learn more, download through iTunes, or purchase through CD Baby. Follow Michael on Twitter at @Michael_Gallant or on Facebook.