It’s not quite a case of: “Come in, TikTok – your time is up.” However, Triller has been growing sharply in recent months and is starting to break tracks and acts in its own way. For now, the audience skews towards both the US and hip-hop, but the app has global ambitions and wants to go deeper into different styles of music. It is already making inroads into EDM and that cross-genre expansion will only continue this year. As it stands, tracks on Triller are not fighting for attention in the same way they have to on TikTok which makes it an exciting and potentially powerful platform. We speak to those using it about what works, what doesn’t work and why Triller might not kill TikTok but could end up offering a fresh alternative.

If you were playing music industry bingo in early 2020, then a run of “TikTok”, “monetizable” and “hip-hop” would have you screaming “full house”. It is not too much of a surprise, then, that “social streaming” app Triller – whose appeal combines elements of all three – has got music industry marketers pricking up their ears in recent months.

Triller, essentially, is an AI-powered music video app that allows users to create videos by automatically stitching together their 15-second clips into one coherent whole. Users can upload audio or choose songs from the Triller feed for their videos which, if not quite as “celebrity” as Triller claims, are at least fairly professional thanks to the app’s AIpowered auto-editing.

In December 2019, Triller launched full-song in-app streaming, allowing “artists and publishers to receive full stream credit when a video goes viral, with streams counted directly on Triller” according to its press release.

“For the first time, streaming will benefit all parties,” Bobby Sarnevesht, executive chairman of Triller and partner in Triller strategic partner Proxima Media, said at the time. “The label, artists, and publishers get credit and revenue from streams and the associated streaming fees.”

As for the hip-hop audience, Ryan Kavanaugh, founder of Proxima Media and a Triller strategic partner, tells Music Ally that the app’s demographic is aged 16-27, 85% of users are in the US and it skews urban. Triller recently announced new investors – including Snoop Dogg, The Weeknd, Lil Wayne, Young Thug and Kendrick Lamar – while the app’s global leaderboard sways towards rap acts, topped by Lil Wayne, Roddy Ricch and French Montana at the time of writing.

A look, too, at the acts who have benefited from using Triller shows a distinct hip-hop bias. Triller was one of the key tools in the rise of Lil Tecca, according to manager Giuseppe Zappala, with the rapper using the platform (as well as Instagram) to build anticipation for his breakthrough hit ‘Ransom’, while Chicago rapper Calboy’s ‘Envy Me’ got a boost from the success of the #Envyme Challenge on Triller.

More specifically, Triller appeals to the hip-hop dance community, with the platform becoming a place to help break dance trends like The Woah. 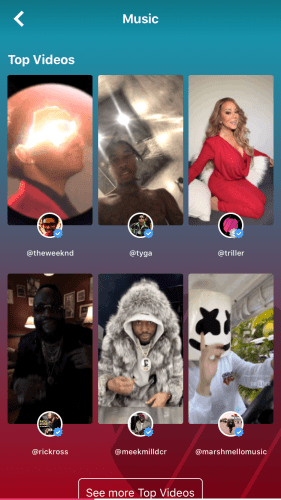 The answer to music discovery?

Kavanaugh says that his company, which acquired a controlling interest in Triller in 2019, sees the app as “the answer to music discovery”.

“There’s about 20,000 new songs uploaded per day in the US: the formal way we describe it is, ‘Music discovery is the biggest challenge facing the music industry today,’” he says. “Triller we actually see as the answer to music discovery. We make it simple for the biggest and the smallest artists to create videos with music in a professional-looking way using our AI. And then if it goes viral, the artist benefits.”

That’s a heck of a claim, when for every Lil Tecca there are thousands of artists doing little or nothing on Triller. That said, Triller has scale on its side, at least in the US. In a recent press release, Triller argued that it was now bigger than TikTok in the US, with more than 26.5m monthly average users.

This success may not have spread globally – in Sensor Tower’s ranking of the top 20 apps worldwide in Q3 2019, Triller was nowhere to be seen, while TikTok was second by worldwide downloads – but there are signs of interest picking up in other markets, with UK act Darkoo recently finding success with ‘Gangsta’ on Triller.

It helps, too, that Triller appears to have a better relationship with the music industry than TikTok , whose love/hate struggle with labels, artists and publishers looks set to be one of the defining battlefields of 2020.

A Wall Street Journal report in October 2019 claims that the three major labels each have “a small stake” in Triller, citing “people familiar with the deals”, while Tuhin Roy, UMG’s SVP of new digital business and innovation, said that Universal “is dedicated to working with innovative companies like Triller that are creating new ways for fans to engage with artists” when UMG signed a global licensing deal with Triller in 2018.

A label source in the US says that Triller, while not yet of great importance to the music industry, “is definitely interested in becoming a good partner to the business”.

“In terms of linking through to streaming, the fact that [streaming] is baked in doesn’t hurt,” the source adds. “At the same time, it is still growing as a business. I don’t know how much they are moving the needle for the music industry at this point.”

Complementary; not a killer

For all Triller’s nascent popularity, though, very few people in the music industry are looking at it as a replacement for TikTok or Dubsmash . Instead, it is seen as a complementary tool, with certain key differences. One of these is its relative lack of scale when compared to TikTok’s 800m monthly users.

This might seem like a negative point for Triller, but it does have a certain upside: one label executive told music:)ally that TikTok is overrun with pop stars, which makes it harder to cut through compared to Triller. It’s hard, after all, for even the biggest hip-hop act to compete with a TikTok BTS exclusive.

“If you can match the right content with the right audience, then definitely there is an interest to break through the clutter [on Triller],” says our US label source.

Triller has also captured a hip-hop audience that, while definitely present on TikTok, is diluted by TikTok’s sheer scale, where different genres of music rub shoulders with comedy clips, cooking and everything in between.

“Hip-hop has become the new pop,” says Kavanaugh. “Gen Z are very smart. It’s not an audience that can be bought or marketed to. It’s organic and real. Brands like Tommy Hilfiger or Beats are prime examples. They worked because the community adopted them early on. And that is what is happening to Triller. We are the beneficiary of hip-hop becoming the new pop.” 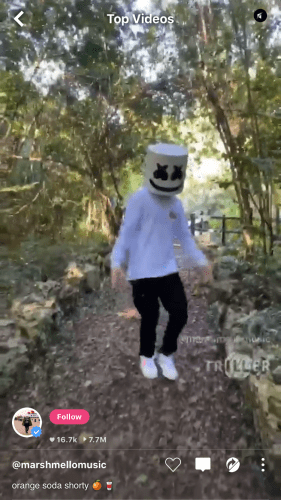 The question remains about whether Triller’s appeal can also extend to other musical genres. Triller’s recent deal with the Grammys, which saw it host an official Grammys party as well as offering “exclusive artist content”, looked like a play for the mainstream, while a Mariah Carey Triller Christmas challenge in December 2019 could be seen as evidence of Triller reaching out to a mass audience.

One genre where Triller has made some impact is EDM, a connection that makes sense given Triller’s dance-centric audience. Marshmello was one of the recent investors in the platform, as well as one of Triller’s biggest stars: he has 93k followers on the app and his videos often pass more than 1m views each there.

At this point it is worth injecting a dampening note of reality. One US journalist, who has covered both hiphop and Triller, says that the platform’s popularity has been overstated. “It’s mildly popular,” he argues. “It’s not close to TikTok, and the main appeal of it seems to be for rappers or underground dances.”

Triller’s impact outside of hip-hop has also been fairly minimal. True, Mariah Carey’s ‘All I Want for Christmas Is You’ finally hit number one in the US in 2019, but it’s unlikely this had much to do with Mariah’s Triller Christmas challenge, which didn’t appear to have much of an impact on the general public.

What’s more, Chris Mariotti, “leader and manager” of LA rock band Edgar Allan Poets, says that Triller is “not a place for rock lovers” after experimenting with the app for his band. “In two months, I posted around 15 videos [on Triller], I tagged them, I searched for some cool trending hashtag,” he says. “My top video gained 100 views, I got just one like and I gained just one follower. Honestly, I felt in the desert. I felt out of place! So after two months, I decided to stop putting an effort into that app.” (See box on next page for more.)

Triller content is not locked to the Triller app

A possible counter argument to this is that Triller isn’t all about onplatform success. Videos made on Triller can also be used elsewhere, allowing users to benefit from its relatively sophisticated video-editing function without being stuck on the platform. In summer 2018, for example, 10k.Caash made a video on Triller that showed him dancing The Woah to ‘Intro Part 2’ by Arlington rapper Splurge . Rather than becoming a Triller hit per se, the video took off after 10k.Caash uploaded it to his Instagram, in a way that shows the malleability of Triller.

“Nobody has really broke using [Triller] exclusively; it’s a combination of things,” says the US journalist. “And normally it gets more exposure once it’s posted on other platforms like Instagram or YouTube. That’s compared to TikTok where something could get big on there without ever being posted anywhere else.”

“Every now and again, Lil Donald posts the best Triller videos on his IG and Facebook for comments from his followers,” she says. “This is not during any contest. It’s just a way for him to acknowledge and inspire fans to make Triller videos with his songs in the hope that he’ll post them. With nearly 200k followers on IG, that’s incentivising.”

On a global scale, it is probably too early to really judge Triller. “There has been a growing conversation around Triller, but I don’t know how much of that has been Triller themselves,” says our US industry source. “I don’t think it’s the first name on people’s lips. But that’s not to spite them. They are still growing their business and their identity.”

The company’s new musical investors should help it to find a new audience – although we once said the same about Tidal – while Triller’s plans for global expansion are only just getting going, helped along by its local music feeds and leaderboards.

The company is also in an acquisitive mood, buying Mashtraxx , a machine learning platform for music and video editing in late 2019 in a move Triller claims will provide its users “with next-generation editing tools to create and track powerful, attention-grabbing, and shareable content”.

“Triller’s growth has been largely based on its organic nature and its ability to showcase art and generate user engagement and streams,” Sarnevesht tells music:)ally. “Our acquisition of Mashtraxx and its AI along with Triller and its huge fanbase is a roadmap to pure excellence never before seen.”

Time will tell if this elaborate claim can come true. But, like the hip-hop community it serves, you could never accuse Triller of lacking ambition.