Upfronts highlights (including the jokes). Plus, a rough day for Apple: Tuesday Wake-Up Call | Advertising Age 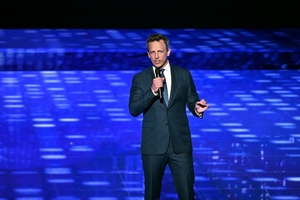 What people are talking about today
The TV upfronts are here, which means networks are putting on elaborate performances to woo advertisers. As Ad Age’s Jeanine Poggi writes, where else can you watch Luis Fonsi and gyrating dancers perform onstage at 11 a.m. on a Monday? At Radio City Music Hall, NBC Universal brought out Fonsi, John Legend, Adam Levine, Jimmy Fallon, Ted Danson, Rami Malek, Tina Fey, Amy Poehler, “Saturday Night Live” stars and a few Kardashians. Seth Meyers poked fun at the hoopla, joking that when his 3-year-old wanted to play with him this weekend, he had to decline, saying: “I’m sorry, I can’t. The Procter & Gamble people are in town.”

More on NBC Universal: Linda Yaccarino, chairman for advertising and partnerships, touted the company’s free, ad-supported streaming service set to debut in mid-2020: “Other companies are pushing advertisers out, NBC Universal is bringing advertisers in.” Read more by Jeanine Poggi.

Also: Check out some trailers for upcoming NBC shows, including a sitcom called “Perfect Harmony” that stars Bradley Whitford of “The West Wing” as a music professor tapped to run a small-town church choir. (Actual tagline: “He needs them. They need hymn.”)

Next up: Fox
Justin Timberlake was at Fox’s upfront, and so was the cast of the upcoming “Beverly Hills, 90210” reunion series. Ad Age’s Anthony Crupi writes: “Tori Spelling, aka Donna Martin, earned the night’s biggest chuckles when she offered up a six-word tag line for the ‘Beverly Hills, 90210’ pseudo-spinoff: ‘This time, there are no virgins.’”

It was Fox’s first upfront presentation since selling off many entertainment assets to the Walt Disney Co., and Fox cast itself as an underdog, post-transformation. Although “it’s hard to sell a dark-horse narrative when you’re airing the next Super Bowl,” Crupi writes.

By the way: Fox’s new trailers are here. And if you missed it, here’s the sign-up link for Ad Age’s upfronts newsletter.

One-two punch
The U.S. Supreme Court allowed a major antitrust class action against Apple to go ahead. The lawsuit focuses on the App Store and the fees Apple charges there; The New York Times notes that the company “charges up to a 30 percent commission to developers who sell their products through its store, bars them from selling their apps elsewhere and plays a role in setting prices.”

Yesterday’s escalation of the U.S.-China trade war also helped send Apple’s stock price down 6 percent. Morgan Stanley analyst Katy Huberty, quoted in Fortune, says that while Apple hasn't been affected much by tariffs in the ongoing spat, it “has one of the most significant exposures to Chinese exports to the U.S., given that final assembly for many of its consumer devices is located in China.”

Hack: “A vulnerability in the messaging app WhatsApp has allowed attackers to inject commercial Israeli spyware on to phones,” The Financial Times reports.

Bug: Twitter “disclosed a bug that in certain conditions resulted in an account’s location data being shared with a Twitter partner—even if the user had not opted in to sharing that data,” TechCrunch writes. But we don’t know much more—not even the name of the partner.

Search: Google is putting more emphasis on visual search, and as George P. Slefo writes in Ad Age, that has ramifications for advertisers. One expert says marketers will need to optimize images for mobile, similar to how words are optimized for search engine optimization.

Podcast of the day: Feeding America, the non-profit, allocates 10 percent of its marketing budget toward new platforms and technology such as Twitch, chief marketing and communications officer Catherine Davis says. That helps the non-profit reach a younger audience, and “the mechanisms to donate money are fundamentally built into those systems,” she says. Listen to her conversation with Ad Age’s Jessica Wohl on the Ad Age Marketer’s Brief podcast.

Ad of the day: Actress and singer Doris Day died Monday at age 97, her foundation says. Day's songs often turn up in ads; Samsung used Day’s retro tune “Que Sera, Sera” recently in an ad about futuristic tech. Check out other ads using Day’s tunes, as compiled by Ad Age’s Olivia Raimonde. And here's a link to some of Day's movies on streaming services, worth saving for a rainy day.