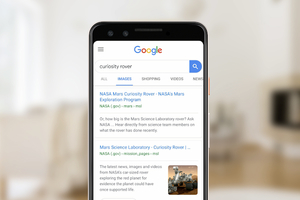 Google showcased its visual search product during its IO event in San Francisco last week, and while marketers certainly see its potential, it's not without caution.

“Visual search can be both magical and frustrating,” says Mark Himmelsbach, founding partner and chief strategy officer at agency Episode Four. “It's magical when a visual search picks out the exact thing you'd like to know about and brings in multimedia results instantaneously. It's frustrating when you can't get the picture to match what you want to know and it seems like a colossal waste of time.”

At its event last week, Google highlighted Lens, an app that can recognize physical images, or translate words written in Chinese into English, for example. Now, Google is rolling out both computer vision and augmented reality directly into Google Search. In one instance, Google showed how someone searching for a pair of New Balance shoes could see what they look like from multiple angles. At the same time, that person could also see what those shoes would look like next to their outfit thanks to augmented reality (see GIF below).

Other companies such as Pinterest and Microsoft are also working on or already have similar offerings, but Google is dominant when it comes to search, commanding more than 70 percent market share worldwide, according to eMarketer.

“With the growth of Google’s core search business appearing to have slowed, Google is continually looking for advanced opportunities to leverage this infrastructure to drive further monetization from the platform,” Apostle says. “Alphabet is putting some big bets on visual to reinvigorate brand interest in exploring more ways to work with Google.”

Like text and voice search, visual search is simply a means to an end, says Apostle. The difference, he says, is that the technology, data and tools at the foundation of visual search are significantly more robust.  “By that I mean visual search necessitates much more heavy lifting to return the information a person is looking for,” he says.

“For marketers, understanding that consumer intent in conducting visual searches remain largely consistent – discovery, research, shopping and entertainment. With this in mind, brands and their agencies need to ensure that the search strategies they have been, and are, employing are adapted to align with this emerging market activity," Apostle says.

“What we're looking at is an inevitable step in information technology,” says Josh von Scheiner, founder and creative director at social media agency VonShine Industries. “We're visual creatures. It makes sense that Google – and others –would develop tools that are a natural part of how we experience the world.”

Consumers who see a pair of shoes they like, for example, must take multiple steps in finding them online: They must describe what they look like as best they can, scroll through results, perhaps find the brand that makes them and then see where they can purchase the shoes online, von Scheiner says. “There’s so much friction,” he says. “This is why shelf space matters so much at retail – it’s too much work for consumers to find what they want.”

Emerging technologies such as virtual reality and dash buttons typically received a lot of initial hype, but then fizzled out as the product's use cases didn't live up to their promises. Yet that’s not the case with visual search, Steve Carbone, managing director and chief digital officer of Responsible North America, says. “Visual search will be an increasingly important way that consumers learn about products when making purchasing decisions,” Carbon says.

He adds that marketers need to make sure their image assets are optimized for mobile in a way similar to how words are optimized for search engine optimization. “Think SEO and image categorization that makes it easy for search engines to serve products based on the images people search for,” Carbone says. “There are 2 billion images uploaded across the internet each day, and Google was born on categorizing the world’s information – and that’s not just limited to textual content.”

Search’s purpose has always been to match a person’s intent with the right content, Episode Four’s Himmelsbach says. But with visual search, Google is going to have to infer a lot of intent. “These inferences must be sharper and better than text-based search for it to gain fast adoption,” Himmelsbach says. “If a brand can be the best at inferring intent – and buying ads around that intent – then they will be able to capture a lot of engagement and build loyal users.”

Spending on digital advertising continues to surge each year, surpassing verticals such as TV ($71 billion) by nearly 53 percent in 2018, according to the Interactive Advertising Bureau’s revenue report, which was released last week.

Although emerging areas such as video and social media provide growth, it’s search that fuels digital advertising eye-popping revenue numbers each year, contributing nearly half ($48 billion) of all ad digital spend in 2018 ($107 billion).

Despite a king’s ransom in market share, however, few innovations have been realized with search. Voice technology, for example, has yet to figure out how to incorporate ads into queries without frustrating the consumer.

Although visual search has the potential to be a game changer in online discovery, the technology is still in its infancy. Machine learning, for instance, needs to understand objects and then provide recommendations. Pinterest, for example, is investing large swaths of money in computer vision for this very reason.

“We’re teaching the machines to classify objects in the same way a person would,” one person familiar with the space says. “A chair in my head isn’t a bunch of words, it’s a bunch of images that add up to my style. This is a renaissance of machine learning, and every day we’re learning more about how images relate to taste, and improving relevance.”