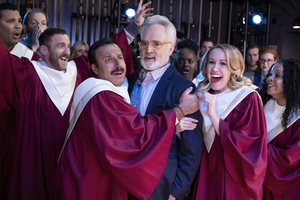 As Ad Age’s Jeanine Poggi reports, NBC is staying the course with much of its fall primetime schedule. The network’s Wednesday Chicago block—“Chicago Med,” “Chicago Fire” and “Chicago P.D.”—is staying intact, and “Superstore” will continue to anchor its Thursday comedy block starting at 8 p.m. ET. But as upfronts week kicks off, the peacock has still been announcing various new primetime shows; we're spotlighting three high-profile additions for which trailers have been released.

First up, “Perfect Harmony” (above) which will follow “Superstore” on Thursdays. Bradley Whitford stars as a music professor who is drafted to run a small-town church choir; NBC’s tagline for the sitcom: “He needs them. They need hymn.”  Also joining the Thursday line-up, at 9:30 p.m. ET: “Sunnyside” (below), starring Kal Penn as a disgraced politician who becomes a champion for immigrants.

And on Monday nights, Jimmy Smits stars in “Bluff City Law” (also below), which NBC is calling “a powerful new legal drama” that focuses on a Memphis firm specializing in civil rights cases.