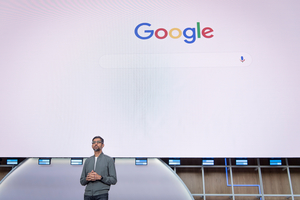 Google rolled out product updates with new data protections, including stricter controls about tracking web users on Chrome, as it put more focus on privacy and security during its yearly developer conference.

Google executives revealed new search, voice-assistant, maps and home speaker features Tuesday at Google I/O, where app developers and marketers got a glimpse of the next generation of the platform. Google's new privacy tools included web tracking controls on Chrome as well as “incognito” modes that limit how much personal information people share when using maps and search.

“We know our work on privacy and security is never done, and we want to do more to stay ahead,” Google CEO Sundar Pichai told the conference.

Now, Google is partly following suit, but not nearly as aggressively. It will make websites disclose to users how cookies are used and give people more control over what cookies they accept.

“We are making a number of upcoming changes to Chrome to enable these features, starting with modifying how cookies work so that developers need to explicitly specify which cookies are allowed to work across websites--and could be used to track users,” said Ben Galbraith, director of Chrome product management, and Justin Schuh, director of Chrome engineering, in a blog post announcing the updates.

Changes to cookie technology can have a major impact on how much money publishers earn from ads, because the less targeted they are, the lower their value. Also, the lack of targeting can hamper an advertiser's ability to reach its intended consumer.

“More privacy settings for users, more user control, is absolutely good for the open web,” says Tom Kershaw, CTO of Rubicon Project. “But going too restrictive has the potential to suffocate the industry.”

Going ‘incognito’
Google also expanded the places users can implement "incognito" mode. It used to just be a toggle on Chrome, which made browsing anonymous. On Tuesday, Google announced an "incognito" mode for search and maps. "Your activity, like the places you search and navigate to, won’t be linked to your account," Pichai said.

Using “incognito” mode can impact the amount of personal data available for marketers to target ads, but there are other ways to make up for that lost visibility, says Tom Edwards, chief innovation officer at agency Epsilon.

“Google is using machine learning algorithms that will literally be integrated into a person’s phone, which in turn will drive prediction and understand affinity across its users without necessarily targeting the individual,” Edwards says. “It makes sense that this type of approach would be how Google will be able to sustain a monetization approach while still providing incognito support … They won’t be sending data to the cloud; it will all happen on the device."

Google showed off its new artificial intelligence technology with machine learning models that work by storing data locally on people’s devices. For instance, Google’s machine learning can analyze people using keyboards locally on their devices but shoot updates to all devices when, say, a new word enters the lexicon and everyone needs it to appear in their autocorrect.

Augmented search
Search received one of the flashiest updates, with a new augmented reality component. When a person uses a mobile phone to search for New Balance sneakers, one of the results is a link revealing a sneaker in augmented reality, for instance.

“You get a much better sense for things like, what does the grip look like on the sole, or how they match with the rest of your clothes," says Aparna Chennapragada, senior director of product leading AR and VR at Google.

Augmented reality mostly has been the province of apps like Snapchat and Facebook, but building it into search should speed up the technology’s adoption among brands and publishers now that it’s directly accessible from the mobile web in a mainstream way.

Faster assistant
Last year, Google unveiled Duplex, an advanced communication tool for its voice assistant that could handle complex conversations. It makes reservations by calling a hair salon on behalf of the user, for example. On Tuesday, Duplex for Google Assistant was upgraded, so it is 10 times faster than it was and more intuitive.

In a demonstration, a Google employee volleyed about a dozen commands at the assistant without needing to say, “hey, Google,” between each request. The assistant runs almost instantaneously, too, ordering a car within seconds, and opening apps just as quickly. Assistant is on more than a billion devices, according to Google, on phones, Google Home Hub speakers and screens, and in cars through Android Auto. (Google Home Hub, the speaker that competes with Amazon Echo, received a name change, too, and is now called Home Nest Hub.)

The assistant also is able to act almost autonomously to fill out online forms and make car rental reservations and other tasks without needing much guidance from the user.

A brand doesn’t have to change its website in any way to allow for Google Assistant to navigate order forms and shopping carts. For users, Pichai says, the assistant "is acting on your behalf and helping you save time, but you’re always in control of the flow."