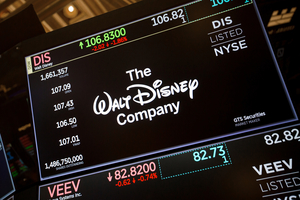 That’s the message of its latest earnings report, which exceeded Wall Street estimates and sent the shares up as much as 2.4% in late trading.

Though profit fell 13% in the fiscal second quarter, that was better than what analysts predicted. Sales also topped estimates in the period, which ended in March.

The company is launching Disney+ on Nov. 12, marking its biggest strategy shift in decades. The $6.99-a-month streaming platform will compete with Netflix Inc. as a direct-to-consumer product, aiming to lure families with its Marvel, Pixar and Star Wars content. “Avengers: Endgame,” which hit theaters last month and is now the second-highest-grossing film of all time, will stream on Disney+ on Dec. 11.

“The positive response to our direct-to-consumer strategy has been gratifying,” Chief Executive Officer and Chairman Bob Iger, 68, said in a statement. Disney’s $71 billion acquisition of 21st Century Fox Inc.’s entertainment assets also is helping the effort, he said.

‘Black Panther’
Disney battled some tough comparisons in the quarter. Its movie studio released “Black Panther”— the biggest domestic hit of 2018—in theaters during the year-earlier period.

Income at Disney’s most-profitable business, cable TV, rose 1.6% to $1.76 billion in the quarter, buoyed by rising fees charged to cable distributors, particularly for ESPN. But profit at the ABC network fell, hurt by lower sales of advertising and TV programs.

Disney also took a $353 million charge related to its stake in Vice Media, which targets millennial viewers through its cable TV network, HBO show and other media. It’s the latest writeoff for Disney’s holding in the media company. Disney acquired a 21% stake in the business, while 21st Century Fox had an additional 6% piece.

Disney shares rose as high as $138.19 in after-hours trading. They were already up 23% this year, bolstered by optimism about the Burbank, California-based company’s new streaming services. It outlined plans for Disney+ and its other subscription services during an April investor conference.
Film Slate

Disney unveiled its slate of new films going out until 2027 this week. It delayed “Avatar 2” by one year to 2021, hurting next year’s lineup. But the company also announced plans for three new “Star Wars” films starting in 2022.

Including all one-time items, Disney reported quarterly net income of $5.45 billion, or $3.55 a share. That includes a $4.9 billion gain on its interest in Hulu, a streaming platform it co-owned with other media giants. With the purchase of the Fox assets, Disney’s interest in Hulu grew to 60% and triggered a remeasuring of its original stake in the service, leading to the gain.

On a conference call with investors, Iger confirmed that his company is in talks to buy Comcast Corp.’s stake in Hulu, potentially making Disney sole owner, and that the service would likely continue to use programming from the cable giant’s NBC division in such a deal.

In a regulatory filing, Disney also said Comcast will have 90 days to decide if it wants to participate in Hulu’s purchase of a 10% stake from AT&T Inc. If not, Disney’s share of Hulu will jump to 70%.