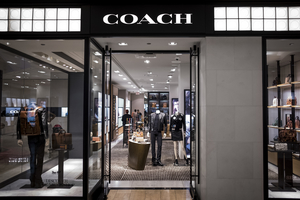 Tapestry Inc. soared as much as 17% after reporting third quarter profit that exceeded analyst estimates, even as its struggling Kate Spade line still has work to do.

Global same-store sales at Coach inched up 1% in the quarter, matching the average projection, according to Consensus Metrix. Kate Spade’s comparable sales slipped 3%, but the company said that unit could return to positive same-store sales by the fourth quarter.

Key insights
The better results suggest that Tapestry’s rocky previous quarter, when it cut its profit forecast, may have been a one-off. Chief Executive Officer Victor Luis said he was “pleased” with the performance, with the company forecasting revenue growth in the low- to mid-single digits this year. Management’s turnaround of the ailing Kate Spade label has been slower to take hold as it tries to reverse the effects of years of discounting that eroded the brand’s cachet. Still, the company said Nicola Glass’s new collection has been resonating, and the unit’s same-store sales drop wasn’t as severe as in the previous quarter. The company also announced it has authorized share buybacks of as much as $1 billion, giving investors another reason to cheer.

Market reaction
The shares rose the most intraday since April 2009. Tapestry had dropped 8.9% this year through Wednesday’s close, compared with a 12% gain by competitor Capri Holdings Ltd. Tapestry is competing against Capri, the owner of Michael Kors, Jimmy Choo and Versace, to stand out as U.S. versions of Europe’s luxury conglomerates.