Nick Edwards and Joshua Jankowski built Feed as a tool that automates the advertising of organic content on Facebook and Instagram to build an artist’s audience, having artists with smaller budgets and no dedicated digital team around them in mind. Feed is designed to test and optimise around the clock, working in the background to grow an artist’s audience.

According to its creators, they found that there were “other tools out there that automate marketing, but there didn’t seem to be any tools that were focused on teams with smaller budgets and didn’t have any marketing expertise themselves. We wanted to make Feed as musician and creator-friendly as possible.”

The team’s data shows that more organic, natural feeling posts outperform anything that looks salesy, or like marketing. Therefore, the idea behind the platform is to capitalise on that fact: the platform uses content the musician posts day-to-day – prioritising posts that have the best engagement from existing fans – to allocate budget on the posts that work best as ads.

On the platform, currently in beta, you can navigate between four menu sections: Posts, Controls, Results and Insights. After signing in and connecting your Facebook Ad account and pages, you will see all of the existing posts of an artist’s account under the Posts tab.

Each post is depicted as a card, showing which platform it has been posted on, providing a preview of the post and copy, its reach/likes/comments/views and most importantly, its ‘Organic Score’. 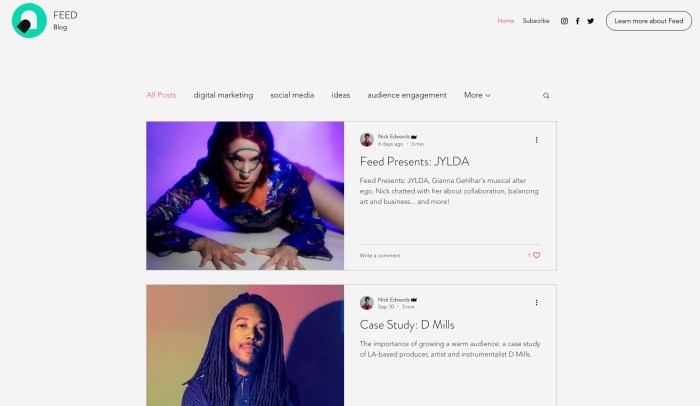 Feed describes this Organic Score as follows: “This shows how popular the post is with your existing following. The higher the number, the more popular the post. Feed prioritises posts with a higher Organic Score when deciding which ads to create. The score takes into account different types of data, including likes, comments and views.”

These carry different weights: for example, a share or comment is a more meaningful form of engagement than a like. This saves a lot of time for artist teams that would otherwise need to dig into their post stats and manually compare the popularity of various posts across different metrics and would then still need to go into Ads Manager and book the ads plus compare their performance.

Having this sort of instant comparative data into how current posts are performing is also something quite unique. Other platforms such as Chartmetric or Beatchain do offer insights into which of an artist’s posts performed best, but they tend to focus on the best-performing posts of all time so that artists can understand what kind of content to create more of, rather than showing which current posts deserve attention.

Under each post, you have a dropdown menu where you just change where to send users to, for example, the artist website, Spotify, Apple, YouTube etc. You can also add new links here. The first thing Feed does is work out which of the artist’s posts have the most engagement organically and then turns those into ads.

These are then targeted at two kinds of people: Those that are likely to be interested in the artist’s music (cold audiences) and those who have engaged with the artist’s posts/ads in the past but not very recently (a retargeting audience). Each post also has a button that allows you to toggle advertised posts on or off, so even if the idea is to automate the advertising, you still have complete control over what ads are currently running.

Once a post has been advertised, you can also compare insights between paid and organic exposure and engagement. At the top of the page, there’s also a post settings button that’s opening a sidebar where you can choose whether or not you want to make all posts eligible for promotion by default and where you can paste and grab all relevant social and streaming links.

Feed pulls in either the last month of posts or the past 20 posts, anything older will not be promoted by default, though you can turn these on manually. The platform pulls in new posts as the artist makes them. Periodically, new ads are created from these posts and compete against each other within different audiences/ad sets. 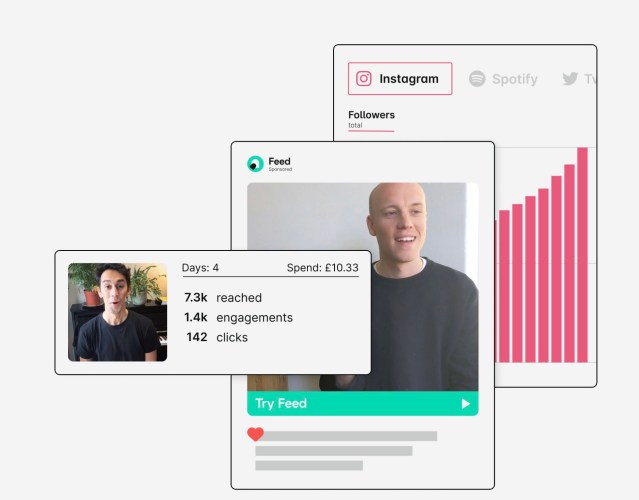 Jankowski estimates that it takes a couple of weeks for the algorithm to stabilise and work out which posts and which audiences do well.

Jumping to the Controls tab, here is where you can currently enter the budget you want to spend per day. You can start from as little as £2, although Feed recommends spending at least £3/day, so the platform can target new potential fans as well as retarget previous engagers. Ads can be paused at any time.

This page will also allow you to define targeting parameters for the cold audience: age range, gender and territories. Feed pulls top countries and cities from an artist’s Facebook/Instagram followers and Spotify listeners that you can choose for targeting – anywhere that has a significant number of people that are aware of the artist. It will also show a suggested minimum budget based on how many territories are selected.

The upcoming Results Page will feature easy-to-compare results between posts that are currently running against each other, so users will understand why some posts have been running longer than others. You will also be able to audit across different types of audiences, which Feed has classified into Cold, Cool and Warm.

Under Insights, you can find growth stats for each of the platforms you have entered in the post settings. Feed tells you how metrics like profile views, follows and engagement have developed over time and what’s most interesting is, it gives you a follower/like growth forecast for the next year, based on current growth stats.

This can be quite handy for independent artists looking for partners, showing their current and projected digital growth. With this, Feed is trying to bridge the gap between an ad on Instagram and what’s going on on Spotify / YouTube / Soundcloud, to track an artist’s cross-platform growth.

Again, having an ad platform and TOOLS attributable growth metrics inside the same platform is a well-needed tool for smaller artists who can’t afford comprehensive campaign platforms like Wavo for instance.

While in beta, the platform is free to use with Feed planning to take a cut of advertising spend in the future. This will be 10% of the user’s chosen daily budget, dropping to 5% for spend over £150 in the billing month.

The daily budget chosen includes the service fee, which makes it easy to keep track of. If the user doesn’t spend anything, the platform won’t charge anything but in a month where posts are promoted, Feed applies a minimum service fee of £2.49.

The Feed team is currently running a crowdfunding campaign, which has already raised 220% of its target. Its listing on Crowdcube claims that more than 600 creators have joined the Beta programme of Feed so far and that more than £300k has been raised in the last 12 months.

Some of the users already using the platform include mid-size independent labels, managers and major label marketers working on developing acts. In the next coming months, there are plenty of updates planned, including adding interest targeting, conversion tracking as well as integrating other ad networks like Spotify, TikTok and YouTube.

The ultimate aim: you set a budget and it will know the right networks for you to use and then spend that budget.