Ololo.to Shuts Down After Being Targeted By ACE Anti-Piracy Coalition | TorrentFreak

Back in 2018, streaming search engine Alluc announced that it would be closing down.

Considering the site’s length of service, an impressive 13 years, a sizeable gap was left in the market for some kind of replacement.

While there are plenty of indexing sites around, dedicated search engines have proven less easy to find in the current climate.

The Rise of the Ololo Streaming Video Search Engine

On April 1, 2018, a new streaming video search engine appeared. Named Ololo and located at Ololo.to, the site gave users the ability to search for the latest movies and TV shows.

By crawling some of the largest video hosting platforms on the planet, including the now-defunct Openload, Streamango, Rapidvideo and Verystream, for example, the site became a hit with users. 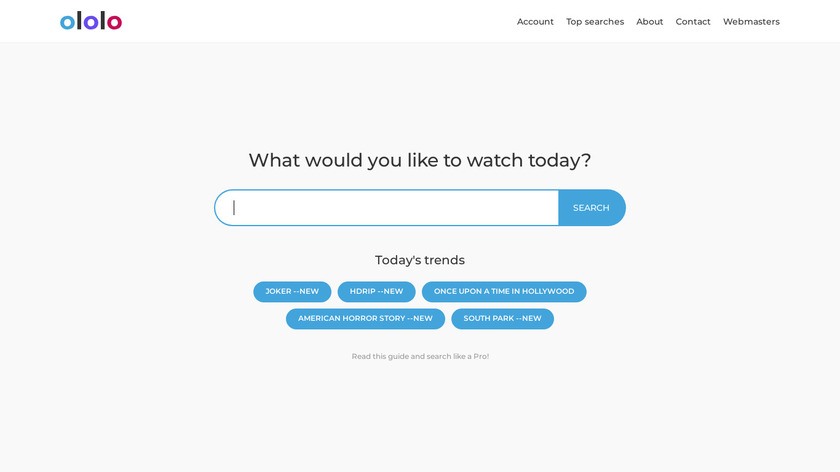 “With ololo you can search hundreds of websites at one place and you can also use ololo as an alluc alternative. Help us spread the word and tell your friends who are looking for alluc alternatives,” the site previously announced.

One Year Ago: Ololo Takes a Big Hit

Exactly a year ago, the unlicensed video streaming market received a huge blow when Openload, a massive file-hosting platform generating more traffic than legal services such as Hulu or HBO Go, was suddenly shut down along with stablemates Streamango, Streamcherry, and Verystream.

All had been shuttered after coming under pressure from global anti-piracy coalition Alliance for Creativity and Entertainment, which required their operators to pay a “significant” damages award. The action had a serious knock-on effect for Ololo too, which previously crawled the platforms looking for content.

“Goodbye openload, streamango, verystream. This is gonna hurt us for a long time,” the site reported at the time.

Recovering and Moving On – For a While

As a result and from a standing start a little over two years earlier, the site was generating significant traffic, pulling in an estimated two million visitors per month, many of whom commented on the quality of the platform and the results produced. However, trouble lay ahead.

At some point, the site’s Twitter account was suspended for violating the platform’s rules. The nature of the violation isn’t known but the account, which was supposed to be used to notify users of outages, would’ve come in handy.

Without warning from the site’s operator/s, Ololo suddenly went down in the past few days leaving the following message: “ololo says goodbye! The ololo search engine has been discontinued.” 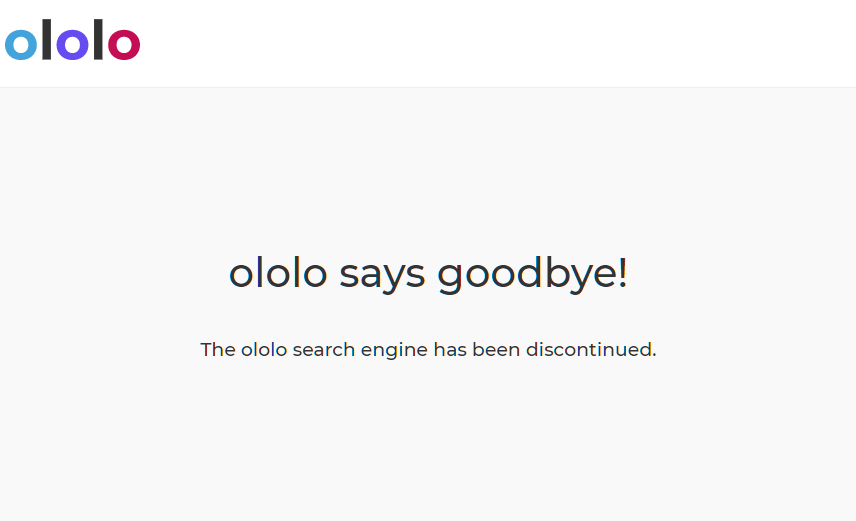 While many of the site’s users felt the closure was a complete surprise, recent history reveals that the search engine had some problems. It isn’t clear whether these were the direct cause of the site shutting down but in the scheme of things, it’s likely they played a part.

Earlier this month we reported how group of major Hollywood studios, Netflix, and other movie companies had obtained a new pirate site-blocking injunction in Australia.

The injunction targeted 78 domains, requiring that the majority of ISPs in Australia block them moving forward. On the list was Ololo, with the applicants in the case stating that the search engine’s “primary purpose or effect” was to infringe or facilitate the infringement of copyright.

While a blocking order in Australia wouldn’t have affected the site’s traffic too much, another more significant event was on the horizon. After successfully shuttering Openload and colleagues a year ago, the Alliance for Creativity and Entertainment (ACE) was on the heels of Ololo too.

This month, ACE obtained a DMCA subpoena compelling the Tonic domain registry, the operator of Ololo’s .to domain, to hand over information on many sites, including Ololo.

Again, it is not clear whether the blocking, subpoena, or the prospect of being unmasked caused the shutdown of Ololo but the timing of the site’s closure raises plenty of questions. However, with the platform now consigned to history, perhaps it will be allowed to just fade away.