In recent years, various copyright holder groups have advocated for initiatives to cut off funding to pirate sites.

This “follow-the-money” approach is complex as it requires voluntary cooperation from various third-party services such as payment processors, hosting companies, advertisers, and search engines.

In Denmark, local anti-piracy group Rights Alliance has been working on this issue for several years and this week revealed a breakthrough. Together with the Danish Ministry of Culture, the group announced a new anti-piracy deal.

The Codex agreement, which is signed by several of Denmark’s biggest media agencies, advertising outfits, payment processors, and industry organizations, expands an earlier initiative that was limited to the advertising industry.

All parties that signed the deal have agreed to ban pirate sites to the best of their abilities. Ideally, this should lead to fewer ads on pirate sites and decreased payment processing options, among other things. How this is achieved will vary from company to company.

The agreement is the result of an initiative by the Ministry of Culture which started in 2013. Through a government-led series of hearings, various key players were brought together, which ultimately led to the cooperation that was announced this week.

Danish Minister of Culture Joy Mogensen is happy with the progress made and hopes it will help put a dent in the ongoing piracy problem.

“It is important that we stand together to ensure that advertisements for legal services and products do not inadvertently end up on illegal websites and in this way indirectly help to finance illegal activities. That is why I am pleased that there is so much support for the Codex agreement from the key digital players,” Mogensen says.

All signatories agreed to a set of anti-piracy obligations. For example, they will distance themselves from pirate services, implement concrete anti-piracy policies, and block known pirate sites wherever possible.

From the Codex Agreement 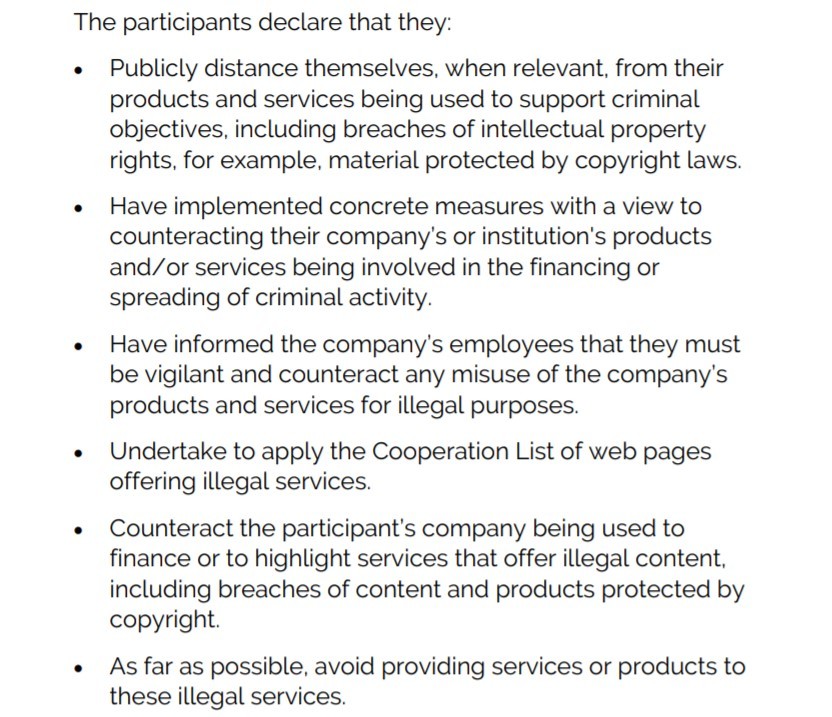 The known pirate sites are placed on a “cooperation list” which is intentionally kept secret. In fact, signees are specifically forbidden from sharing it with outsiders.

“As a rule, the Cooperation List is not public in its entirety and is only available to those companies who cooperate on the list so that sites with illegal content are not highlighted unnecessarily,” the agreement reads.

TorrentFreak reached out to the Danish Rights Alliance to get some more context. Unsurprisingly, the group couldn’t share the full blocklist but director Maria Fredenslund informed us that it contains roughly 350 URLs including Thepiratebay.org, Popcorn-Time.is, as well as the defunct Grooveshark.com site.

These URLs are based on Danish site-blocking orders, issued by local courts. However, the Rights Alliance would like to see it expanded in the future. For example, sites can be added based on set criteria, similar to WIPO’s piracy blacklist.

“This list is based on dynamic court orders, however, we believe that it is essential to expand with sites which are illegal based on approved criteria – inspired by WIPO’s list,” Fredenslund tells TorrentFreak.

Time will tell how effective the Codex agreement will be. TorrentFreak reached out to two signees, media and advertising agency OMD and the publishing industry organization Danske Medier, but both said they have no way to directly measure the effects.

Allan Sørensen from Danske Medier says that individual publishers always had the option to block campaigns from illegal sites. However, that wasn’t always easy, as not all ads are separately approved and it’s not always clear what a pirate site is. With the Codex blocklist, this will be easier.

“It’s safe to say that a lot fewer banners from copyright-infringing sites are being shown as a consequence of this initiative and it has greatly improved the efforts needed from publishers and the legal certainty in the matter,” Sørensen says.

While that is certainly true, there are always advertising companies who won’t shy away from pirate sites. Some even seek them out specifically. And on the payment side, some cryptocurrencies are impossible to cut off.

More information on the Codex agreement and other signatories, which also include Microsoft News, Adform, Jubii Media Group, Eurocard, and Xandr, is available on the Rights Alliance website.