Just over a year ago, music streaming service Deezer announced its desire to launch a pilot of a ‘user-centric payment system’ (UCPS) by early 2020.

You can read our primer on the user-centric model here, but in a nutshell, it ensures that the money from your streaming subscription only goes to the music you listen to.

It feels like a fairer way to divide out streaming royalties than the current system, where the royalties from your subscription go into a big pool divided by overall share of streams.

[In another nutshell: if BTS or Taylor Swift or Drake or whoever get 5% of everyone’s streams, they get 5% of your subscription even if you never listen to them.]

Nobody’s quite sure exactly who’ll benefit from a switch to user-centric: there have been a few academic studies, and they were all cautious about drawing big, bold conclusions.

That’s exactly why Deezer wanted to run a pilot, in just one country (France) and only with labels (not publishers or collecting societies), to gauge the impact. The company said it had “the majority of French labels” on board, yet a year later the pilot still hasn’t launched.

Yesterday, for a special episode of our Music Ally TV Show, Deezer’s chief content and strategy officer Alexander Holland joined us for an update, and to talk about why the company is still keen to test UCPS.

The show also included Lottaliina Pokkinen, head of legal affairs for the Finnish Musicians Union, which published the most recent of those academic studies in March 2018.

Deezer clearly doesn’t want to alienate its key partners by pointing the finger of blame, and Holland was suitably tactful on the reasons for the pilot not yet launching. However, it’s clear that one or more major labels are yet to commit.

“We are chipping away here for many years already,” said Holland. “This can only happen in the context of agreement with our label partners. We cannot unilaterally introduce UCPS and say ‘this is the way we do it’.”

Holland went on to outline what Deezer sees as the main benefits of UCPS, starting with fairness and transparency.

“I would consider it is more fair if my money goes to the artists that I love, rather than running through a black box. It is definitely more transparent if we run it through a UCPS system,” he said.

“It also leads in our view to better allocation of the money across the spectrum of artists and genres… and it might create almost a pension fund. Even artists that in the short term might lose, in the long term might get this money back as their audience grows older, and their frontline catalogue becomes back catalogue.”

That’s an important point in the user-centric debate: the likely impact isn’t so much about shifting royalties away from major labels and towards independents, or from big artists towards medium and small ones.

If anything, it’s more about shifting the centre of gravity for royalties away from the heaviest (and often youngest) users of streaming services, and towards the lighter (and often older) listeners.

(Hence Holland’s point about UCPS’s impact on an artist potentially moving from negative to positive as their audience gets older in the future.)

It’s also reflected in some of Deezer’s findings from its internal modelling of UCPS’s impact, in this case the UK, shared with Music Ally during the show. 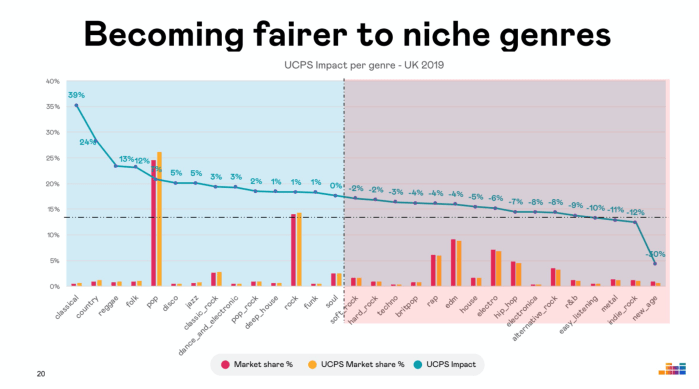 Yes, the phrase ‘more likely’ is doing some heavy shifting in that sentence. And yes, pop is an outlier, genre-wise, because it includes such a wide range of music, past and present.

“In general the divide here is along the lines of the age of the user,” said Holland.

Pokkinen also shared some data from the Finnish study, which drew on real data provided by Spotify, and used it to analyse a sample of 10,000 tracks.

The researchers found that the ‘top tier’ of this music – the tracks that got more than 100 streams in the period covered by the study – was just 0.4% of the catalogue.

The ‘mid tier’ of tracks getting 10-99 streams accounted for 9.6% of the catalogue, and a whopping 90% got fewer than 10 streams. Pokkinen said that the study showed that under UCPS, none of the top-tier artists would get more money, and in general that they would lose money to those in the lower tiers. 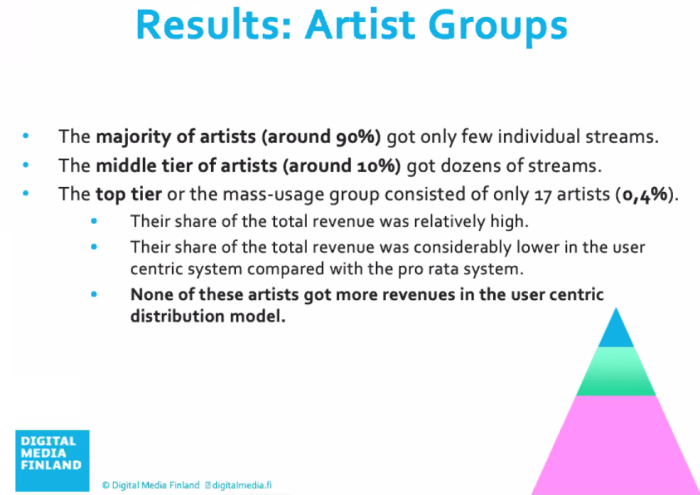 This, however, wasn’t the big surprise from the publication of the Finnish study.

“The biggest ‘aha!’ from the public wasn’t the results: it was the fact that there is no user-centric at this moment,” she said. “People who were used to buying CDs thought that [with streaming] their money was still going to the artists that they listened to. So that was the actual news.”

The big question around the user-centric model is whether it will ever happen: and about what’s needed to persuade all of the labels to at least sanction a pilot, let alone a full switch.

“I want this to happen and I’m sure it can happen. This is why we’re relentlessly working on this over the years, and I think the time is really riper than ever,” said Holland, who’s well aware of the recent Covid-19 and live-lockdown fuelled resurgence in debate about artists’ earnings from streaming.

“It’s very very important, and it also creates a closer connection between the artist and the fan if the fan knows that his money goes to the artists he listens to,” added Holland. “The interest in the subject is growing, and the public support is growing.”

Convincing the labels is the key. Pokkinen suggested that as early investors in services like Spotify, the major labels had the clout to shape the current market-share system of streaming payouts with their early licensing deals.

“They must have thought that it was profitable for them, and since they have big back catalogues, it’s very likely that their music is being mass-used,” she said – mass streaming being the key to a high share of streaming royalties under that system.

“Although having talked with some major label CEOs who are also willing to switch: they have also seen what Alexander said: that they might lose some in the short run, but in the long run they wouldn’t lose that much due to people listening to the catalogues.”

Pokkinen also thought that the Covid-19 pandemic could boost the campaigns for introducing UCPS, not least because it would offer streaming services an artist-friendly narrative.

“It has shown that live income, at least for the artists, is the biggest, and when you take live out of the equation, people can’t live off what they make in royalties,” she said.

“So this would be a perfect time to say ‘We switch to user-centric so you can support your favourite artists by listening to them on your streaming platforms’. Because now you can’t really do that because you don’t know where the money goes.”

The talk returned to Deezer’s efforts to convince all the labels to sign up for its pilot.

“We shared a pile of data with them, and I think we have come to the end of that exercise. They understand relatively well the detail and the granularity of what UCPS means for them, for their artists, for their frontline and back catalogue,” said Holland.

“Public support… and ideally artist support will be able to sway them over time to at least try it out with us,” he added. “Our ambition is to run this and roll it out globally. But we think it’s easier to digest for all of our partners to say ‘Let’s try this market and see how it goes’… And we are ready to implement that.”

In fact, Holland said that Deezer’s systems have been ready for UCPS since June 2019, albeit after “many months” of work to prepare them.

“We have been reporting to labels and key partners in both ways so they can compare and analyse the data,” he said. Meanwhile, more than 75,000 people – music fans – have visited Deezer’s UCPS website to read up on what the switch would mean for the artists they listen to.

“This is a topic that we have to be patient with, and just keep the fire burning, and not give up on the discussion,” said Pokkinen, who thinks that artists could have an important impact on the debate.

Holland agreed that if streaming is to switch to a user-centric model, it’s a marathon rather than a sprint to bring all the necessary rightsholders onside.

“First and foremost, patience. We will continue fighting for that, and we will gain in my view more and more support on the side of the audiences, on the side of the artists, and at some point I’m convinced our label partners will say ‘Okay let’s try it out, let’s see how it treats us and how it behaves’ – so we bring it out of the scientific analysis into the real world and push it out there,” he said.

“I see that in the not-so-distant future, although I have been over-optimistic in that respect before, so let’s hope we can do it sooner rather than later.”

“You have to remember that we are talking about big businesses,” added Pokkinen. “We have to use some force, but we also have to have a common goal, and good examples like Deezer to show it’s still a profitable business [for labels] to do it like this. We have to keep on going, and trying and pushing, otherwise nothing will happen.”