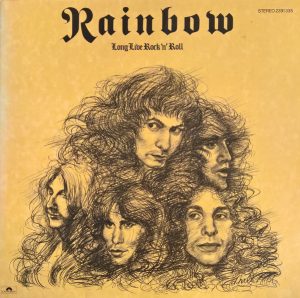 Yeah, I know it’s officially “Rainbow,” but for some reason — maybe their first album — I always thought of them as “Ritchie Blackmore’s Rainbow, which is where I had them on my master playlist, so this is both in and out of alphabetical order.

Ritchie Blackmore was probably my first guitar hero: the guy whose tone and general mastery of hard rock guitar spoke to me in my early teens. And so, even after he split from Deep Purple and started making records with a tiny necromancer named Ronnie James Dio, I was at least marginally curious, and “Man on The Silver Mountain” was enough of simulacrum of Purple to sound good to me when it was on the radio.

That said, the only one of his albums I bought was 1978’s Long Live Rock ‘n’ Roll. I don’t remember why, though it probably had something to do with hearing the title track on Rock 96 FM, and generally agreeing with the sentiment. :: Flashes Devil Horns ::

I also remember thinking that, outside of two songs, the album was pretty much a dud. One of them was the aforementioned title track, and the other was a raver called “Kill The King,” which isn’t a song about chess, but rather the medieval power struggles in which Dio made his bread and butter.

“Kill The King” started off with a patented Blackmore guitar flourish over a stop-time — which either you’re a sucker for these kinds of things, or you’re not — and then drummer and co-writer (along with Blackmore and Dio) Cozy Powell (I just accidentally typed “Cozy Power” and that would work too), takes off at a lightspeed gallop, while Blackmore makes his rhythm guitar shoot laser beams that Dio is dodging while screaming about danger and treason.

In the middle, Blackmore takes on of his greatest guitar solos, right up there with “Child in Time” or “Burn,” and absolutely wicked torrential downpour of notes that just keeps going and going and going, staying out ahead of the song, at the end of which — spoiler alert! — the king gets his.

I was too young to see Deep Purple in their heyday, though I guess I could have at any time in the past 40 years, but in March of 1981, Tim and I saw Rainbow at Selland Arena (with the then-ubiquitous Pat Travers opening), and I actually got close enough to the stage to see what Blackmore was doing. This was around the time when he was making his music more commercial but a year or so before they had a top 40 single — at number 40! — with the execrable “Stone Cold.”

BTW, you’d think that would have been the highest-charting single by anybody involved with Deep Purple’s Burn album, but, sadly you’d be horribly terribly wrong. But you can read about that even worse song song soon enough in Tom Briehan’s eternally awesome The Number Ones column on Stereogum.

Anyways, right, seeing Rainbow in concert. Well, especially the crowd-pleasing Travers, I came away with two thoughts: 1) Ritchie Blackmore’s mastery over the electric guitar was absolutely total and 2) he hated that fact, hated the audience, and probably hated the entire world. I’d never seen anybody who was so good at something have such contempt for what they were doing.