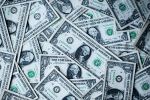 The price wasn't officially announced, although Variety claimed it was "around $100m" while Billboard offered a wider "between $90m and $110m" estimate.

Vine has been around since the mid-2000s, largely focused on the film and TV sectors, but its first deal in music came in September this year, when it acquired the catalogue of songwriter Sean Douglas.

Bagging Harris for its next deal is a significant statement of intent, not to mention renewed proof of the kind of investors setting their sights on music rights at the moment.