The labels, including Universal, Warner Bros, and Sony, accused the sites of copyright infringement and hoped to quickly shut them down.

That didn’t go as expected. The owner of the sites, a Russian man named Tofig Kurbanov, lawyered up and fought back. Before the copyright issues were even discussed in court, the complaint was already dismissed.

A Battle over Jurisdiction

A Virginia federal court ruled that the music companies lacked personal jurisdiction. The sites were operated from abroad and didn’t ‘purposefully’ target or interact with US users, it concluded.

This finding was not without controversy. The music companies disagreed and appealed the matter at the Fourth Circuit Court of Appeals, which sent the case back to the district court a few months ago.

The appeals court found that there are more than sufficient facts to conclude that Kurbanov purposefully conducted business in the US, specifically, the state of Virginia. Kurbanov and his legal team disagreed but their request for a rehearing was denied.

Going to the Supreme Court

Faced with this decision, which could potentially affect many other websites operated outside the United States, the owner of FLVTO.biz and 2conv.com has decided to petition the Supreme Court to take on the case.

The petition is expected to be filed later this month, but the plans were revealed this week. In a motion submitted at a Virginia federal, Kurbanov asks to put the district court case on hold until the Supreme Court has had a chance to rule on it.

The question that will be put to the Supreme Court is whether Kurbanov can be subjected to the jurisdiction of a US federal court when he lives in Russia, operates his sites from there, and doesn’t specifically target US citizens.

According to his legal team, the appeal court’s decision contradicts other rulings in similar cases. As such, they are confident that they have a strong case.

“In the present case, there is little question but that Mr. Kurbanov’s jurisdictional challenge could be rationally resolved in his favor – indeed, this Court did resolve the issue in Mr. Kurbanov’s favor,” they write.

“Viewed in the context of the Supreme Court’s traditional jurisprudence, however, it appears clear that this Court’s original dismissal of the present case was proper and that – given the opportunity – the Supreme Court would reinstate that dismissal.”

Staying the Case Until Further Order

If the district court case was allowed to continue while the Supreme Court is looking into the matter it would be a waste of resources. Kurbanov, therefore, is requesting that the discovery process and other proceedings are placed on hold for now.

“Mr. Kurbanov, a Russian national and citizen, who has never set foot in the United States, has a right to challenge this Court’s exercise of jurisdiction over him as violative of the Due Process Clause. And, of course, with that comes his right to be free from the expensive and onerous discovery obligations inherent in U.S. litigation.”

Aside from the Supreme Court decision, the lawyers also remind the district court that the original motion to dismiss is still in play. The court initially chose not to conduct a “reasonability test” because the other arguments were sufficient to warrant a dismissal. That changed when the appeal overturned that decision.

As such, Kurbanov’s legal team has filed a request to stay the case until the reasonability analysis is finalized and the Supreme Court has had its say. 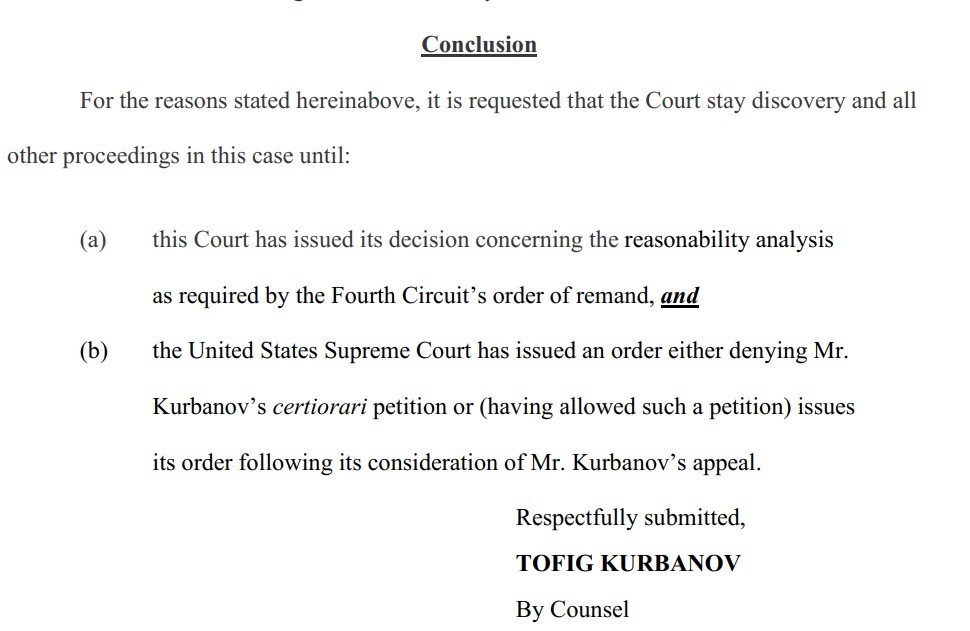