Zebr originally started out as a new music discovery channel on Instagram and TikTok – and is now making an interesting move into influencer marketing. Zebr’s new app allows artists and their representatives to submit music to influencers and content creators, using a streamlined and affordable pricing structure, and ensuring each song is credited in the influencer’s content.

Josh Deal, founder of Zebr, explains: “I love the developing stage of artists and when speaking to many of them to figure out what they were struggling with, it is always promotion and marketing themselves. I was seeing a lot of value for musicians being shared in influencer videos and when I looked into a lot of companies today and what they were doing I found that most of them take the very traditional route.”

What he means by “traditional route” is that most agencies charge a high minimum fee per campaign, which many artists can’t afford. Equally, many micro-influencers who don’t get contacted by labels or managers tend to use licence-free music as they would otherwise have to obtain a licence for usage of a certain track, especially on YouTube.

For artists, having a track featured in an influencer’s Instagram Story or YouTube video presents a massive marketing opportunity that many are craving to get. Seeking out these smaller influencers and being able to build a relationship is another issue. Deal continues: “In most cases, it’s a lottery hoping music gets picked out of somewhere, you cannot just send your music there and it gets lost in Instagram DMs or people are charging premium fees”.

It was with this in mind that he decided to create the Zebr app, to make it as easy as possible to send music to influencers and make it affordable for artists, even if they just wanted to spend £1. And from the influencer’s point of view, they get access to an app where they can receive content submissions, accept the ones they like to use in their content and get paid for it – while supporting upcoming artists.

Deal started developing the Zebr app (a completely self-funded process) about one year ago, and it has recently launched. Zebr has onboarded their existing network of influencers, primarily from the US and UK, and also from Germany, Spain, Italy and Sudan. The app is adding new influencers on a weekly basis, with the aim of establishing a community of influencers that instinctively love sharing music on their channels.

When onboarding an influencer, Zebr’s API connects to their social channels when they log in and collects metrics and data. Based on this, the influencer will automatically be put into one of three buckets (1, 2, or 3 “coins”), depending on their engagement rather than their following.

The “coin value” allocated to the influencer affects the price that artists pay for submitting music to this influencer. Coins can be bought inside the app: 1 coin is £1.99, or less if bought in packages. In order for the influencer to be able to receive this money, they have to respond to a submitted song within 48 hours and listen to at least 20 seconds of it within the app. If they don’t accept the song for use, they must give feedback, otherwise, the user gets their coins back. Zebr takes a 50% cut of each submission, and if provided with a rejection feedback, the influencer gets 25% of the coin.

After having created a profile on the platform, either as an artist or artist representative, you can browse Zebr’s network of influencers. 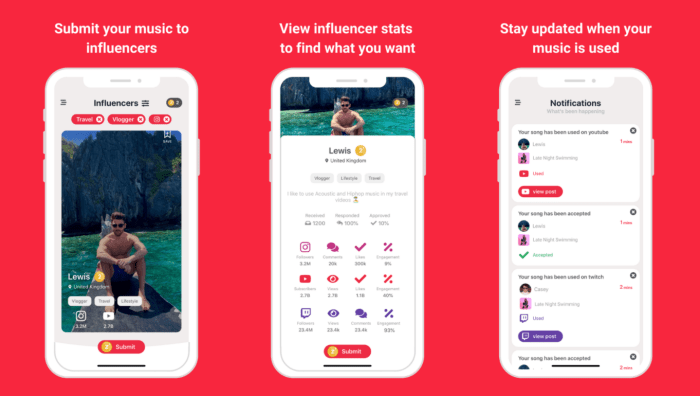 The app provides several filters to find influencers that match the criteria you’re looking for. You can filter by platform (i.e. Instagram, YouTube, Twitch), by coin value, and by genres such as dancer, food, travel, lifestyle, gamer and more. The app’s interface resembles platforms like Tinder, where each influencer has a card presenting key information (location, content category, followers per platform and coin value) and users can either swipe on or click on the profile to see more information. Here, the influencer can leave a note about what kind of music they like, as well as data on how many submissions the influencer has received, the response rate and the approval rate. This should give artists and their teams an understanding of where it would be sensible to pitch and a motivation for influencers to keep their response rate and approval rate high.

Below that is further information on the influencer’s engagement per platform: average comments, average likes, total views, total likes and engagement rate, all based on their ten most recent posts. This is also where you can directly click through to their profiles to look into their overall posts and content.

Zebr users can save any influencer they like to easily access later on. Before artists can submit to an influencer, they will need to go to the ‘Upload Song’ section in the app’s menu. They’ll be asked to upload cover artwork, and an mp3 of the song, add a song title, select a genre and mood and write a short description about the song. Finally, they can add the Spotify URL and choose a 20-second preview, for the influencer to listen to.

The influencer then has 48 hours to listen and respond, and seven days to actually use the song in their content. What’s more, they will have to credit the artist in every video – Zebr scans the posts to verify it’s credited.

When shared on Twitch, influencers have to add the song to their playlist, and on Instagram Stories, they have to either link to Spotify, or share via Spotify so that their followers can click through to the platform.

Crediting the artist and making it easy for new audiences to click through to platforms where they can listen to the music in full is obviously key – not only to create awareness for the artist but also to use this kind of activation to drive streams and revenues.

There are similarities to SubmitHub in some of Zebr’s features and in the way it tries to cut out the middleman for certain campaign elements that tend to be pricey for developing artists. Even though SubmitHub offers to pitch to influencers too, it is mainly focused on enabling artists to pitch their music to blogs, YouTube channels, and Spotify curators – so Zebr does fill a gap.

The other problem Zebr is trying to solve is making it easier to find the right influencers to work with. Other companies like HypeAuditor do this too, although their client base seems to be more on the corporate end, or for clients who invest heavily in influencer marketing, and access to their search features is not affordable to smaller artists.

Another company that comes to mind is Lickd, which has recently secured licensing deals with Universal and Warner to provide cheap licenses to YouTube creators – although this platform lacks Zebr’s pitching element.

Deal says the app has had an incredible early response since inviting the first artists and influencers three weeks ago, with, he claims, zero marketing. So far, he says they have had more than 1,700 songs submitted via the app, and over 600 songs already used in influencers’ content.

Zebr’s goal is to find all those influencers that are up for promoting music and to get them on their platform – with their mantra being “everyone is an influencer”. The aspiration is to eventually offer a more tailored service, where labels will give Zebr a budget, and the company will provide bespoke plans of how much engagement they will be able to deliver across a variety of platforms. “The ultimate goal,” Deal says, “is getting as many people as possible to be exposed to your music.”