The coronavirus pandemic has forced artists and their teams to focus even more on the digital space, where fans are spending the majority of their time. Fanaply – a company that creates digital collectibles and fan engagement tools for artists – suggests that it’s now crucial to think about products that allow fans to express their fandom online, too.

When Fanaply was established around one and a half years ago, founders Grant Dexter and Mike Rosenthal wanted to build on a system that has driven the success of many games for years.

In Fortnite or League of Legends, users can play for free – but microtransactions and virtual goods are built into the games as upsells, allowing users to personalise their avatars and their experience inside the game. It’s something that young consumers are very familiar with.

With blockchain technology, these “virtual goods” can now exist in a decentralised way, and can fit into various apps – instead of being locked into a closed ecosystem like a game. They can also be unique.

In Fanaply, artists can create limited digital collectibles in the form of a digital card, so that fans can commemorate specific events, memories and milestones and be recognised for their support. This could be something like a card confirming the attendance of a specific event (think Travis Scott’s Fortnite concert), being the #1 listener to an artist on a specific day, or being one of the first hundred fans to watch a video premiere on YouTube.

Through these integrations with DSPs, Fanaply provides fans with a souvenir, while also driving marketing objectives by encouraging fans to follow, pre-save, and share. Dexter explains that these collectables, “have a ton of powers built into them – they can be geo-locked, or you might need one collectible to get the other one. For example, you might need all four single collectibles to receive the album collectible. There’s a mechanism and you can add on things like a competition.” 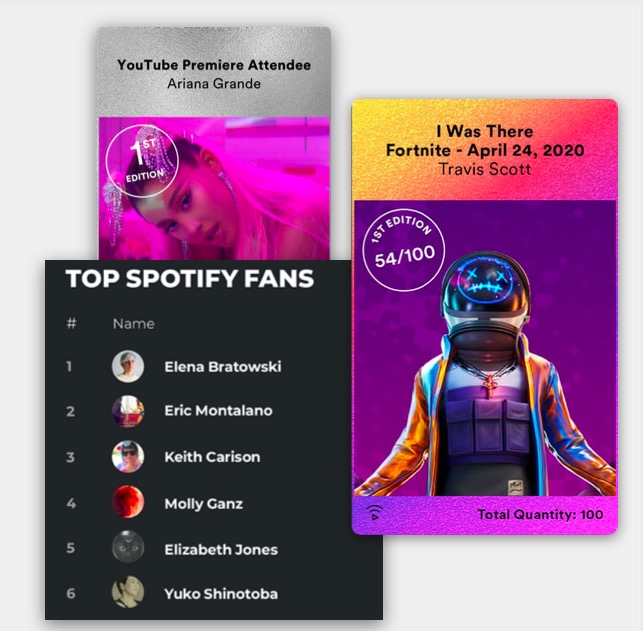 He cites Dillon Conrique as an example of an artist who is using Fanaply to do a campaign around every single. If fans collect all the collectibles, they might get access to a Zoom call with the artist, and this leads to fans getting VIP status within the community or with the artist.

Spotify is following this trend closely too. The streaming service has recently launched a campaign called ‘Day 1 Club’ around its Rap Caviar playlist, providing users with gold, platinum or diamond cards based on when they started listening to some of the artists associated with the playlist.

An additional – and very powerful – feature of Fanaply’s collectibles is that each comes with an exclusive AR filter. Fans can use this across their social media channels to show off their limited edition collectibles. Giving them the ability to shout “I listened first”, “I watched first,” or “Day One Fan,” provides fans with recognition within fan circles, friends, and followers – and amplifies a campaign. The fan is incentivised to share and creates reach and brand awareness for the artist.

This works for as well for massive fan armies eager to show off their status in the community as it does for up-and-coming artists, where music fans are keen to show that they were early discoverers. Fanaply believes their AR filters are one of their key differentiators when compared to other players in this space.

Once a fan has a collectible, they can be used to unlock future rewards like discounts, access to exclusive events, presales and upgrades, or additional online content or contests. Dexter says that these premium cards are highly powerful: “As long as you give people the chance to both earn and buy, it creates a level playing field. I love the ability of a product that allows everyone to participate.”

And because Fanaply’s collectibles are powered by blockchain technology, fans can re-sell these assets on the secondary market where rights holders can take a transaction fee every time they change hands, in perpetuity.

Collectibles can be downloaded to Google and Apple’s Wallet and be scanned at any concert – giving the artist and management the opportunity to reward their top fans with a special surprise. The opportunities are “limitless” – and this is where a connection between the real world and the digital world can be created.

Fanaply has already implemented this: when 5 Seconds of Summer had to postpone their North American tour for 2021, ticket holders for each tour date received a digital gift as a thank you. Now, the band can add rewards to their top fans in each of the touring cities. This ability to segment fan bases and provide something of value to them based on their fan behaviour is reminiscent of what startup Portes does – although that app’s overall functionality is focused on enabling privacy-first VIP experiences, rather than offering digital collectibles.

Cryptokitties is another company that recently made headlines with a virtual merch partnership with Muse, though the company is less specialised towards music partnerships.

A quick scroll through Fanaply’s website shows how many artists are already using the platform, including Dua Lipa, Megan Thee Stallion, YoungBoy Never Broke Again, Ed Sheeran, and more. In order to launch a campaign with Fanaply, the first step would be to decide on what kind of action or series of actions you’d like the artist’s fans to take.

Right now, creating and launching collectibles are free, with Fanaply planning to establish a revenue share on upgrades and premium collectibles. The company is also working on a self-serve platform: right now, managers and labels will need to get in touch with the team to set up a campaign. Depending on the type of campaign, Fanaply can set up a campaign within two to three days.

There is the inevitable question of whether or not offering such digital collectibles will resonate with fans across all kinds of music genres. Dexter says that Fanaply’s appeal is not genre- or demographicTOOLS specific: “every genre so far has had engaged fans.” 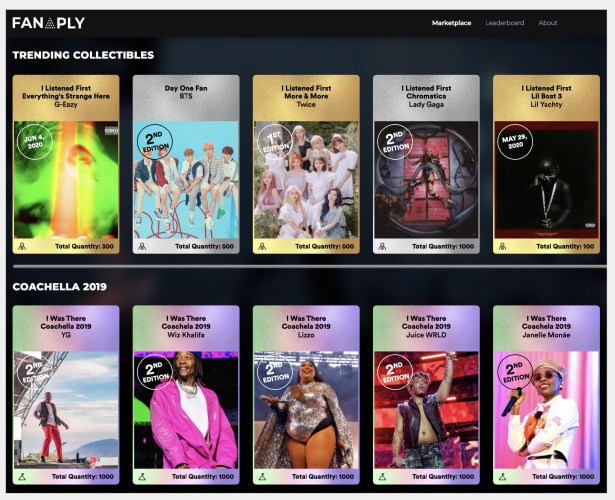 He also says that there is eagerness amongst fans to engage. “Redemption and claim numbers are 15 times what you see in a normal product/market fit. Within that, some fan bases seem to be more excited – but we’re still learning about that for now. Pop artists – especially younger-leaning pop artists – are pretty good, but then older hard rock and metal fans have really engaged fans that understand technology… we’ve been really surprised about what we thought of as olderleaning Gen X fans.”

Gen Z fans, he says, are “perfect for this and get super, super excited.”