ISP blocking has become a prime measure for the entertainment industry to target pirate sites on the Internet.

The practice has been around for over a decade and has gradually expanded to dozens of countries around the world.

This is also the case in Greece, where the first blockades were issued in 2018. The Greek blocks are overseen by the IPPC, a special commission at the Greek Ministry of Culture and Sports that acts following complaints from rightsholders.

The Greek system is different from that of many other countries because it doesn’t involve a court. It’s an administrative procedure which allows copyright holders to swiftly request pirate site blockades, without the need for lengthy and costly legal proceedings.

The most recent blocking request was filed by the Society for the Protection of Audiovisual Works (EPOE), a local anti-piracy group that represents the interests of major Greek copyright holders. The company previously obtained a blocking order against The Pirate Bay, 1337x, and YTS, but requested to expand it.

While the original order does its job, Greek pirates swiftly moved to alternative proxy sites. The anti-piracy group, therefore, asked more than 200 of these Pirate Bay, 1337x, and YTS proxies to be blocked as well. 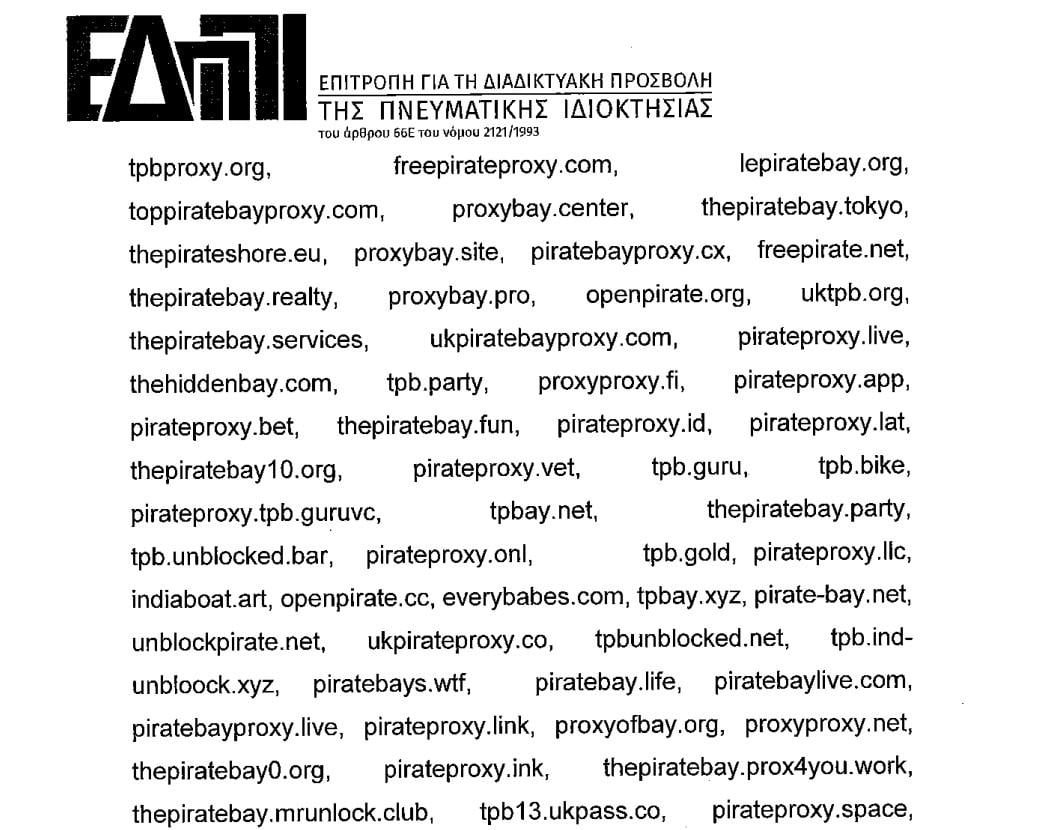 Following careful deliberation, the IPPC decided to expand the Greek pirate site blockade. The Government organization concluded that, for the vast majority of the domains, the database, structure, graphics, and user-interface were substantially similar to the sites that were blocked originally.

In addition to The Pirate Bay, 1337x, and YTS, several subtitle domains, and local pirate sites including GamaTV were targeted as well.

Before issuing a new order, the owners of the domains were given the option to object to the request. This includes the administrator of subtitle site subs4series.com, who claimed that his site was wrongfully targeted.

The blocking application claimed that subs4series.com was similar to the previously blocked subs4free.info, which the site’s administrator denied. The Government organization agreed and rejected the requested blockade.

“After the relevant research, it appears that the site with the domain name subs4series.com does not redirect to the site with the domain name subs4free.info. Therefore, according to the relevant allegation of the applicant, there is no violation, as it concerns the no. 3/2018 decision of the Commission for the Internet Infringement of Intellectual Property,” IPPC writes.

The blocking order is valid for three years and applies to all Greek Internet providers. They’re given 48 hours to add the 264 new domains to their blocklists, including more than 120 Pirate Bay proxies. If the companies fail to comply they risk a fine of €850 per day.

A copy of the most recent blocking order, issued by IPPC, is available here (pdf) This also includes a list of all targeted domains