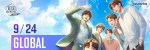 The new mobile game for K-Pop stars BTS has gone live. Netmarble's BTS Universe Story was made available for Android and for iOS overnight, and is the band's second foray into mobile gaming following last year's BTS World.

As we recently reported, BTS Universe Story is about tapping the BTS Army's creativity: creating their own animated stories set in the BTS Universe, featuring the band members.

Music Ally has been testing the app out this week ahead of its release, and it's impressive: with an easy mode to help fans create stories, and a more complex mode for those who really want to get stuck in.