Distributor Amuse and consultancy Midia Research have teamed up for their second report on the independent music community.

One of the headline figures from Independent Artists: Pathfinding Through a Pandemic – that the ‘artists direct’ sector grew by 32% to $873m in 2019 – isn’t a new stat, having originally been published by Midia in March this year.

However, the new report has fresh material on the impact that the Covid-19 pandemic has been having on independent musicians, from their incomes to their creative processes, based on responses from 376 artists.

68.3% of artists surveyed for the study said they have spent more time writing and making music since they went into lockdown, while 56.7% said they have been creating more content for social media. 19.8% have been doing livestreamed performances, meanwhile.

The loss of income from physical concerts has been sparking renewed debate about streaming royalties for musicians. Midia and Amuse’s survey explored that too.

49.5% of the musicians surveyed said that they are ‘becoming concerned that streaming services are not paying a fair share’ – a loaded question, given that the royalties debate isn’t just about what the services are paying out, but also about the deals with labels and publishers governing how much of that money gets to artists and songwriters.

Meanwhile, 29.1% of respondents said that they are ‘relying more on sites like Bandcamp rather than streaming’ during the pandemic, which reflects the current high profile (and warmth from the artist community) towards that D2C platform in particular.

The study includes some data on which elements of artists’ revenues have been down, flat or up during the Covid-19 pandemic, although the ‘live’ part may raise your eyebrows – the report clarifies that the high percentage of artists saying their live income is flat “reflects that many were making no income from live prior to lockdown”. 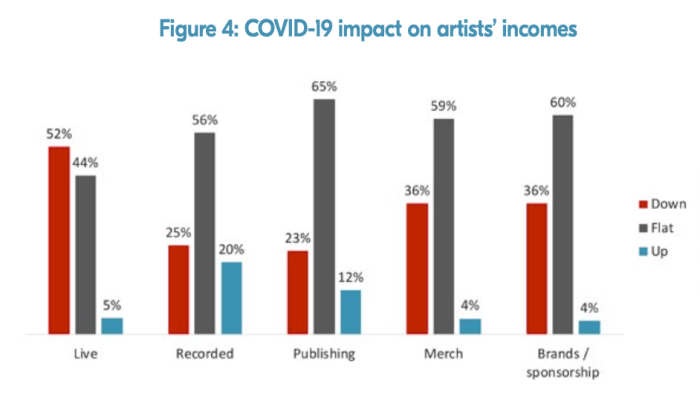 The report also breaks down the average annual income of the 376 artists surveyed, with nearly two thirds of this sample making less than $10k a year, and only 1.9% making more than $100k.

We’ve stressed ‘this sample’ because the report makes it clear in its introduction that “the large majority of our sample are artists direct – releasing music independently without a label”. It’s a useful pulse-take of the independent scene, rather than pretending to reflect the entire artist ecosystem.

With that in mind, the breakdown of artists’ incomes is interesting: recordings (28%), live (18% – this is a 2020 stat, because the report says that last year it was more than 25%) and publishing (16%) are the three biggest chunks, but session work, teaching, merchandise and brand partnerships all chip in.

“Modern day artists manage a mix of income streams, with each individual item often being small but collectively contributing to a more meaningful total revenue base,” as the report puts it. “Independent artists are small entrepreneur businesses. They need four or five income streams to get off the ground.”

“The pandemic has displayed the need of a reinvented music industry, where artists have access to the tools they need to manage and grow their careers in an efective way, on their own terms,” is Amuse CEO Diego Farias’s take on the study, in a statement.

“If more artists can crack funding and remuneration earlier in their careers, the direct artist sector can grow even more strongly than it is already doing,” added Midia Research boss Mark Mulligan.

“The case here is clear for increasing the ways that artists of all kinds can close the funding gap as they build their music careers especially in the wake of the pandemic.”