As millions of citizens in the UK are well aware, crime is a growing problem in the country. Police forces are clearly underfunded and are often criticized for failing to investigate crimes such as burglary and car theft when catching the culprits is considered too time-intensive or futile.

With this backdrop of citizens feeling underserved in criminal matters directly affecting their lives, UK charity Crimestoppers launched a nationwide campaign late 2017 aiming to warn people of the supposed dangers of pirate set-top streaming boxes. The campaign included four videos, which aimed to inform the public that such devices are illegal to use, are sold by “organized crime” groups, and are used to steal users’ identities, and hack their bank accounts.

“Know of someone supplying or promoting these dodgy devices or software? It is illegal. Call us now and help stop crime in your community,” the videos urged.

Crimestoppers said that the campaign had been launched in partnership with the Intellectual Property Office and “industry partners” whose identities were never revealed. However, given the tone of the claims and messages in the campaign, it was fairly obvious a high-profile company or two were closely involved.

More than two years on, UK-based anti-piracy group FACT is still regularly posting to Twitter and on its website, asking people to report entities involved in illegal streaming to the anonymous Crimestoppers hotline. Whether this represents a good use of the charity’s limited resources remains up for debate. When the campaign launched, some sarcastic commenters on YouTube and social media said they were glad that “real crime” was being tackled.

Nevertheless, we were prompted us to revisit the original campaign, with the aim of finding out who was behind it. The first stop was Crimestoppers’ annual report for 2018, which mentions the campaign and how it was received by the public.

“Crimestoppers has joined forces with the Intellectual Property Office (IPO) and other industry partners to run a pilot campaign raising awareness of potential risks associated with illicit streaming devices (ISDs). It warned the public that these devices pose safety and personal security risks and that their use and distribution is also illegal,” it reads.

“This prompted a rise in information received by over 250%, compared to 3 months prior to the campaign. Whilst public opinion on the seriousness of this crime was divided, we advised on the risks of using these devices and emphasized that their production and distribution can be linked to serious and organized crime gangs.”

As shown below, the campaign was clearly listed in the report’s financial section, noting that £100,000 had been allocated as “restricted funds”. This can indicate that whoever ‘donated’ the money to the charity had insisted it be spent in a specific way, i.e not for general charity use. 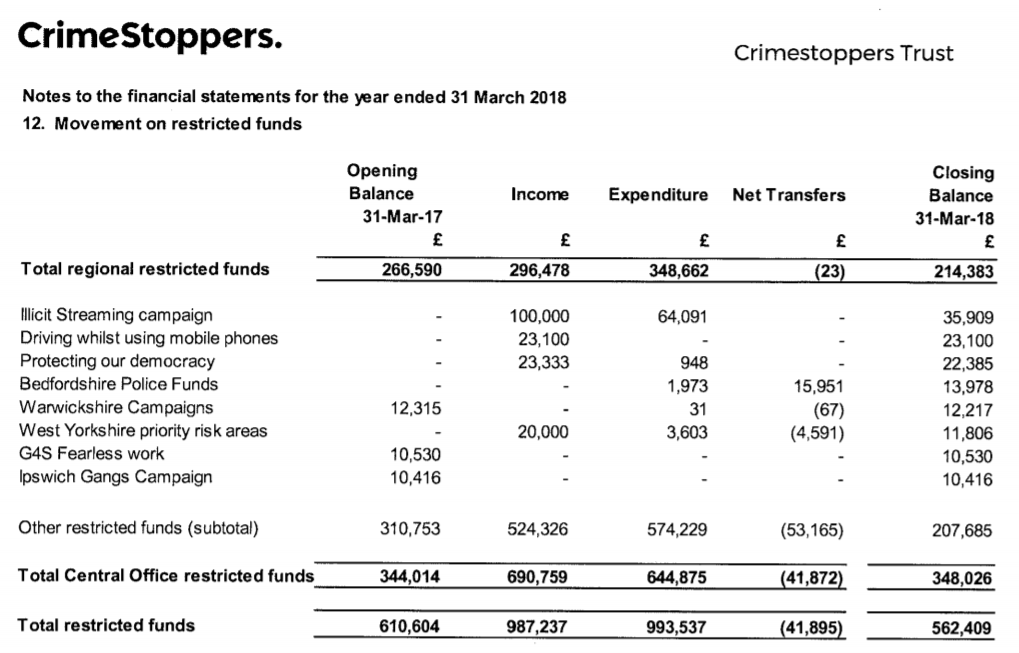 The accounts for 2018 (pdf) simply reference the amount as being allocated to an “Illicit Streaming campaign” and that £64,091 had been spent in the relevant reporting period. That left a balance of £35,909 to be carried over into the next set of accounts so we searched 2019’s report too (pdf), to see what happened to that money. 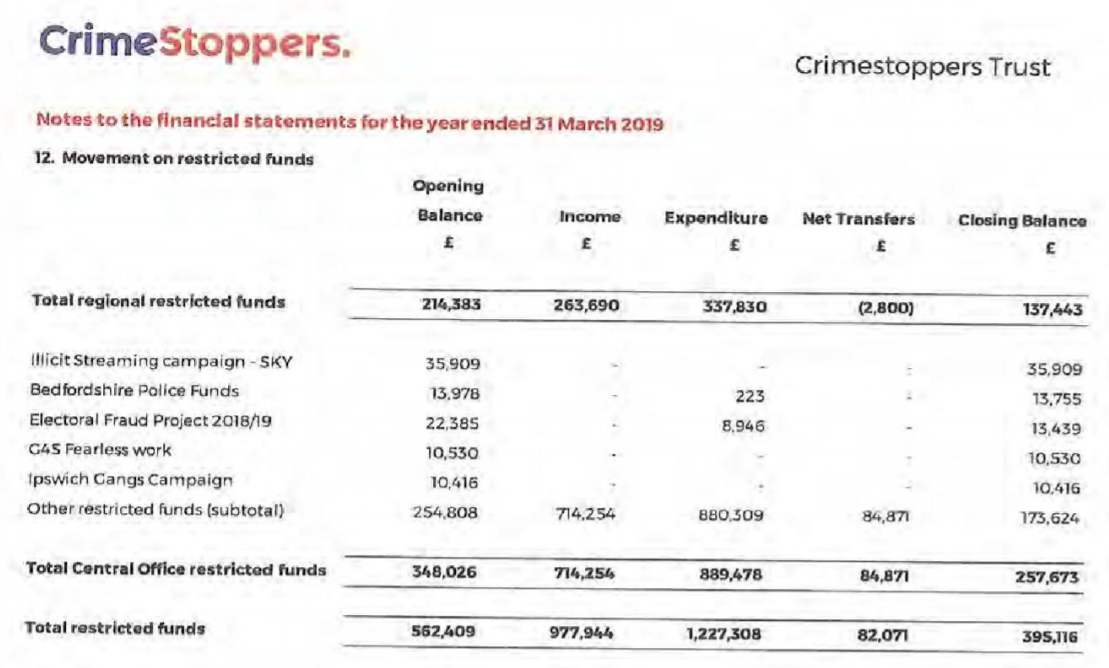 Given its interest in deterring the public from using pirate devices, it’s no surprise that Sky is mentioned as a financier of the campaign. However, hiding this from the public and presenting the anti-piracy campaign as the work of Crimestoppers itself clearly has its benefits. Despite its independent status, the Crimestoppers brand is firmly associated with the police, a message that is much more powerful than if the campaign had Sky’s corporate logos all over it.

The big question, perhaps, is whether the campaign worked. We tracked down the company that was hired to carry out the campaign on behalf of Crimestoppers/Sky, a digital marketing agency called ‘Further‘, which explains the project as follows;

“It was important to squeeze every drop out of this campaign. We started by defining which messages, channels and visuals would convert most efficiently for minimum spend. This meant going in with a thoroughly tested tactical plan for messaging, visuals and channels, optimized for the highest engagement with each audience at the most cost-effective rate.

“As part of the campaign, we created a suite of video assets with each video containing a key message – security risks, the law, organized crime, social responsibility or requests for more information,” Further says.

“The campaign ran for three months and was continually refined to achieve an incredible reach: 18.3m combined impressions and views, 1.4m video views, 65k website visits, and a 263% increase in contacts to Crimestoppers about illicit streaming devices – all for only £0.02 cost for each person we reached.”

Given the anonymous way in which Crimestoppers operates, learning anything specific about the contacts it received about illegal streaming devices is impossible. However, it’s clear that the campaign had an effect on the number of people using the charity’s resources to report alleged streaming offenses.

These will have to be dealt with by Crimestoppers volunteers alongside the many thousands of other crimes affecting citizens every day, many of which the police are already struggling to deal with.