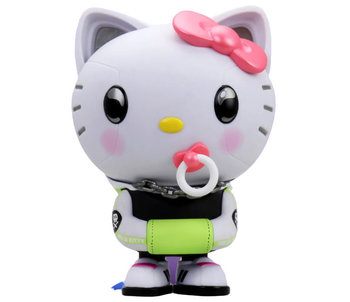 From relatively humble beginnings way back in 1974, Hello Kitty is now one of the most popular media franchises of all time. Indeed, a report last year revealed that the cartoon character has generated an eye-watering $80 billion in sales.

Over the years, Kitty White – to cite her real name – has had her own clothing and toy lines, appeared in manga and anime, and featured in games and music. But despite being obviously busy, this week it was revealed yet more is on the horizon, this time working for the government in Japan.

According to local anti-piracy group CODA, Japan’s Agency for Cultural Affairs appointed Hello Kitty to the role of Copyright PR Ambassador. This week there was an inauguration ceremony during which Koichi Hagita, Minister of Education, Culture, Sports, Science and Technology, welcomed Hello Kitty to her new role.

Masaharu Ina, CODA’s Director of Overseas Copyright Protection, informs TorrentFreak that he obtained a license from Hello Kitty owner Sanrio last year, paving the way for the new career move. We asked if anyone else was considered for the position. Apparently not.

“Are you serious? No way. We could think nobody but Kitty,” he said.

“She is one of the most well-known celebrities and is loved by everybody worldwide. And she respects and takes copyright seriously. We admire her for her motto ‘Everyone in the world is my friend.’ Isn’t she lovely and perfect for telling the importance of copyright protection to the world sweetly?”

Masaharu Ina says that Hello Kitty’s role is to “be the beacon for copyright protection.” She will be looking out for those not respecting the law and if people misbehave online, they will really disappoint her.

“She would not fancy people who patronize pirate sites. We believe that the benevolent Hello Kitty should persuade people with love to buy genuine products,” Ina predicts.

At the moment Hello Kitty will be working in Japan but she could end up anywhere in future.

“I will try my best to let everybody know the importance of copyright,” Hello Kitty says, commenting on her new job for which she won’t get paid.

“We heard that she volunteered for this honorary job because she really respects copyright,” Ina says. “Although she may not mind having some apple pie and tea in a peaceful afternoon.”