In common with all developed countries around the world, entertainment companies in Israel face considerable challenges due to online piracy.

While there’s no shortage of local content for download and streaming, international hit shows are all available for illegal consumption too. These can be consumed in their mainly English-language original formats but there is a massive audience for subtitled TV shows too.

This is where Sdarot.tv excels. This pirate streaming site has a massive library of TV-focused content, much of it easily consumed by English speakers. However, the provision of Hebrew subtitles means that it’s a local powerhouse, one that draws considerable traffic in the region. As a result, the site is under continuous attack from copyright holders.

The King of TV Show Piracy in Israel

According to the site’s administrator, who uses the pseudonym ‘Eli Cohen’, court-sanctioned ISP blocking means that precise traffic levels are hard to measure. However, he believes that in terms of pure traffic, the site is second only to Google in Israel.

“We have crazy traffic – but because of all the different bans and blocking, it’s hard to know the exact numbers. But I really think we’re the most popular website in Israel after Google. Our app alone has over 100,000 users,” he told local publication Haaretz this week.

Like many of its international counterparts, Sdarot (Hebrew for ‘series’) faces a cat-and-mouse game with copyright holders, forcing the site to deploy multiple domains to remain online and continue serving its large audience. However, the site’s operator found himself at the center of a controversy this week, not really for piracy matters, but in response to a political posting on the site’s front page.

In short, Israeli Prime Minister Benjamin Netanyahu is facing a criminal trial, something which has further exacerbated the already complex politics of Israel. So, as a supporter of Netanyahu, Sdarot’s operator posted a message on the site, urging Sdarot’s visitors to “attend public demonstrations” in support of the Prime Minister. 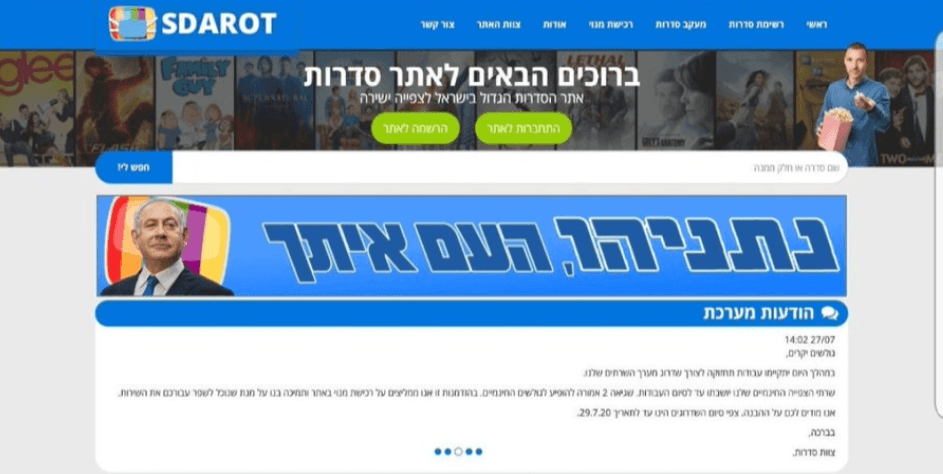 This move, promoting the right-wing Netanyahu, attracted the attention of the center-left news outlet Haaretz, which managed to secure an interview with Sdarot’s Eli Cohen. Given the political divide, it went as well as one might have expected.

“Your website is illegal and provides an illegal service,” Haaretz journalist Omer Benjakob began. “One could say it’s not surprising that someone like you supports a prime minister facing charges of bribery, fraud and breach of trust.”

“Bibi [nickname for Netanyahu] isn’t a thief,” Cohen responded. “Bibi never asked for the support of my website. There is no funding from anyone – unlike the leftists’ protests. In my opinion, the cases against Netanyahu are fixed.”

Sdarot’s operator told the publication that his website offers content to people “irrespective of race, religion or gender – and of course also regardless of political opinions or differences,” adding that if people with opposing political views prefer to use another site, then they should.

Haaretz, however, were keen to know whether the political-leanings of Sdarot’s operator influence the type of content being streamed to users, questioning whether the site would offer content that’s critical of the prime minister, for example.

“So far we haven’t done any blanket bans on uploading any content of any type. As long as it’s subtitled or dubbed [in Hebrew], we’ve posted it,” Cohen said.

“If there’s a show that’s critical of Netanyahu, I may consider whether to upload it or not when the time comes. But I don’t reject flat out the possibility that my political positions will influence what’s uploaded to the site.”

While politics (other than ‘Pirate’ politics) aren’t usually visible on pirate sites around the world, Haaretz put it to Cohen that the authorities might be “out to get” him as he suggests they are Netanyahu. While Cohen acknowledges that there might be similarities, he says the site’s aim is to provide free streaming to anyone that can’t afford to buy cable or satellite, and that comes with its own set of pitfalls.

‘Leftist Anti-Piracy Groups Don’t like Pirates on the Right’

According to Cohen, local anti-piracy group Zira, which represents the local broadcasters that engineered the blocks against his site, sits on the left of the political spectrum.

“[Z]ira doesn’t represent artists and actors. They represent the old left-wing establishment and get millions in funding to keep prices high,” he says.

The full Haaretz interview, which is more comfortable delving into local politics than we are here, is available behind a paywall for those keen to read more. It sits in contrast to the Sdarot site which for now at least, is free to access.

Whether Sdarot will pay the price or reap the benefits of its now-obvious right-wing stance will remain to be seen but it seems unlikely that most pirates will be deterred in their quest for free content, regardless of the political leanings of site operators.