British charity Youth Music is launching a £2m ‘Incubator Fund’ that aims to help 18-25 year-olds – particularly those from under-represented groups – get into the music business.

The fund itself is for music companies, offering grants of between £5k and £30k to spend on wages and support for these young people. Youth Music is especially interested in ‘micro’ enterprises and small companies with up to 49 employees.

The fund will be open to companies, not-for-profit organisations and collectives working in the music industries – the charity is using that plural in its application guidance to stress that it’s not just talking about labels and recorded music.

“From musicians to their management teams and touring crews, to the craftspeople and coders who make musical instruments and music-making software, to the people who work in PR, distribution and licensing and legal teams, as well as trade bodies, unions and federations, teachers and education providers,” is how the guidance casts the fund’s net wide.

The £2m fund will run over two years; is available to people in England, Scotland and Wales; and has itself been funded by players of the People’s Postcode Lottery – an existing partner for Youth Music.

The application process has opened today (7 July) with a deadline of 14 August for the first phase of applications. A second phase will kick off in February 2021.

Alongside the launch, Youth Music has published a report called ‘A Blueprint for the Future‘ based on a survey of 1,300 18-25 year-olds who are looking to start careers in music, as well as deeper ‘immersion’ and qualitative workshops.

The report suggests that links between the music industries and the education system are still too weak, and that while many young people want to be professional musicians, they aren’t also taught about the potential to do other jobs within those industries.

It also cites an imbalance between public and private funding, noting that while music and talent development charities are doing valuable work, the resources mean their efforts are still “patchy, and mainly concentrated in major cities”.

The report also takes aim at a continuing lack of diversity among the young people who do make it into the industries, particularly social class / income group. The report also lays out challenges based on gender, ethnicity and disability that prevent young, talented people from making a career in music.

Youth Music is recommending that music companies review and overhaul their recruitment policies with diversity and inclusion in mind; reform entry-level roles to ensure young people get ‘meaningful experiences’ (while also giving unpaid internships the boot); and build long-term relationships with the music education sector and grassroots projects.

The new Incubator Fund is the charity’s next step in helping them to do this. Music Ally talked to CEO Matt Griffiths about the plans, and also to Imogen Storey and James Duckworth, co-founders of the Esche Haus Audio recording studio in Blackburn – Storey is one of the case studies in Youth Music’s report.

Griffiths said he hopes the report and fund will encourage even more music companies to follow through on the recent talking points around diversity and inclusion.

“Candidly, there’ve been a lot of warm words, and everyone nods their heads vigorously: yes, this is important. Well, do something about it!” he said. “Find out what the evidence is, and in your organisation, crack it and take some action. We wanted to put our money where our mouth is with the fund.”

“We see it almost as like social, creative investment. And we’er having strict guidelines when it comes to people getting funding. It’s quite a stringent set of ‘this is what we expect from you’ guidelines.”

Companies applying will be expected to present programs lasting between three and 24 months, including: a creative project or brief for 18-25 year-olds to plan and execute a real project; a career development package delivered by the company or by a partner; holistic support for the young people’s emotional, financial and access needs; and “best-practice” recruitment and employment processes – Youth Music’s own inclusion and diversity guidance is one of the reference points.

Griffiths stressed that the Incubator Fund is not directly about grants to help music companies struggling due to the Covid-19 crisis, but the plans to launch it have been brought forward, due to the situation the pandemic has left companies and young people alike in.

“We’re looking for innovation. We know these are challenging times, but this is also about resetting the music industry. Innovation in times of crisis becomes even more important,” he said. “We see the fund as partly pragmatic. Your business model is going to shift, and we can partly help with that shift.” 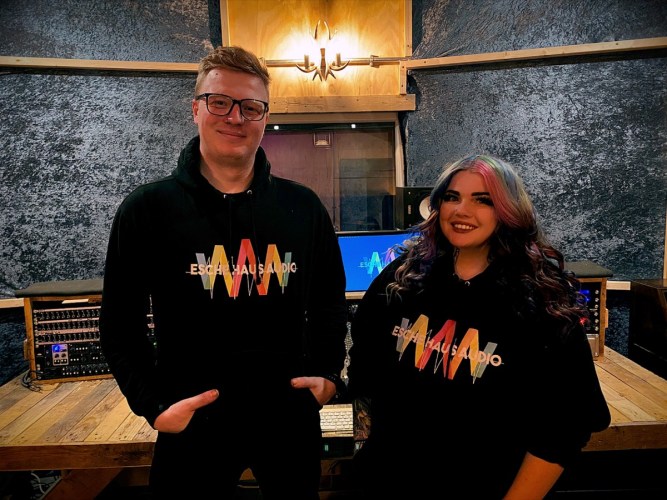 Esche Haus Audio is a good example of a business created by the kind of people who the fund aims to help. Storey and Duckworth are in their early to mid twenties, and are musicians (in alt-rock band Novustory) but started their studio business while still at university.

Storey’s case study on Youth Music’s website outlines some of the setbacks she and they have faced, from sexism (“a lot of people (females included) almost seem shocked when I take an active role in the studio producing their music and engineering their session alongside James”) to ageism, as well as the fact that while their families have been supportive, they didn’t have money to plough into their children’s business.

Storey said that Liverpool Sound City’s Music Entrepreneurs Training Course – Youth Music is a partner for that – as well as a Prince’s Trust business course for under-25s, was crucial for getting Esche Haus Audio off the ground.

“We’ve not had loads of money to put into courses, so we grasped any free opportunity to learn that side of things,” she said. Since setting up the studio, they have tried to help musicians with more than just recording: for example, connecting them with graphic designers, videographers and helping them produce merchandise.

They also see the demand from young people for getting a toehold in the industry, with incoming emails and messages asking for work experience and internships.

“It’s like ‘please let me come and make brews and sweep up!’ – all the things we said to studios when we were in their position. And sometimes we could really do with the help, but we don’t want to be in that position where they feel they have to come in at their own expense,” said Storey.

“It’s only three years ago we were writing those emails ourselves: you want to be in that environment and overhear the conversations going on. You want to sweep up, make brews, clean cables up!” added Duckworth, while pointing out that doing this for no pay may feel like a fair exchange of value at first, but can become a big grey area if your duties increase.

Youth Music’s Incubator Fund might have helped Storey and Duckworth if it had existed they were looking to get into the business, but now that they have their own studio, it could potentially help them to offer paid opportunities to some of those people emailing and messaging.

They’ve got ambitions for Esche Haus Audio too, from exploring the idea of creating a safe space for drag artists to come and record, to launching a label and using their own experiences to help independent artists build sustainable incomes from gigs and merchandise as well as recordings.

“We want to provide artists with a platform where they’re in control, and we’re just helping them with connections that we’ve forged ourselves,” said Storey.

“The more you know about booking gigs or selling merch to run your music as a business, the less likely you have to work double shifts at Tesco to supplement it. Then it starts to pay for itself, and it’s easier to start pushing your music,” added Duckworth. “A lot of people our age don’t know how to do that, and we didn’t until we started the studio.”

This is what Griffiths hopes Youth Music’s new report will show and its Incubator Fund will support more of: the next generation of people coming into the music industry, forging their paths and then paying it back to those following in their footsteps.

“Among emerging 18-25 year olds there’s this resilience and real persistence to do what they want to be able to do , and to network with others to help them do it,” he said.

“But you hear these negative stories about this closed, very tight-knit side in the industry of a lot of people whose lived experiences are based on privilege and power. At a time when the industry has got all sorts of challenges, that’s not good enough business-wise, and certainly not good enough socially and for diversity.”

“We’re looking to challenge industry organisations to take a good hard look at their own practices and their own conscious and unconscious biases, and also to offer a proof of concept of this idea of incubators for young people.”

Disclosure: Youth Music is Music Ally’s partner for our Creative Entrepreneur Programme, which provides skills and support to young people who want to understand how the modern music industry works but may not have the support or resources to access opportunities. It’s a separate thing to the charity’s new Incubator Fund.