Sometimes the big money executives at corporations are referred to pejoratively as “corporate royalty.” This is particularly true of those with “supervoting” stock that gives them absolute control over public corporations.

The nauseating Daniel Ek caused Spotify to grant him supervoting stock according to public filings (that grant didn’t happen by itself).  Together with his co-founder, Mr. Ek can outvote any stockholder or any block of stockholders due to his 1:10 voting power.

But just in case that wasn’t enough, there’s a whole new gambit afoot that cements the “corporate royalty” concept–President for Life, just like Xi Jinping.  Yes, according to a recent Spotify public reporting filing:

Already a billionaire, this life peerage requires that Spotify stockholders still have to take care of Mr. Ek even after he leaves Spotify:

The agreement provides for a fixed monthly salary, although the board of directors determined that, commencing July 1, 2017, Mr. Ek would no longer receive an annual salary. The Ek Agreement also provides for a six-month notice period prior to termination, though we may terminate the agreement with immediate effect if Mr. Ek has grossly neglected his obligations or otherwise materially breached the contract. In the event of termination of employment by us (other than due to gross neglect), in addition to pay during the notice period, Mr. Ek also will be entitled to a severance payment equal to six times his monthly salary, less any income from future employment, payable in monthly installments following termination.

Mr. Ek’s employment agreement contains post-termination non-competition covenants that we could choose to enforce for 12 months following any type of termination of employment, except termination by us due to any reason other than breach of contract by Mr. Ek. In consideration for the non-competition covenant, we will pay Mr. Ek, in monthly installments during his restricted period, 12 times his monthly salary, less any income from future employment, in an amount up to 60% of Mr. Ek’s monthly salary. Such payment will not be made during any period Mr. Ek is otherwise receiving severance pay from us or if Mr. Ek’s employment ceases as a result of retirement or termination by us due to Mr. Ek’s breach of contract. If we decide not to enforce the non-competition covenant, the corresponding payment obligation would also cease. Mr. Ek’s employment agreement also includes employee and customer non-solicitation clauses that will apply for 12-months post-termination and that do not require us to pay any additional consideration.

And just in case you thought that COVID-19 was a disaster for the music business, it’s not for Mr. Ek.  In fact, it may be the best thing that’s ever happened in his young life (right after hoodwinking the music business that led directly to his billions and life peerage): 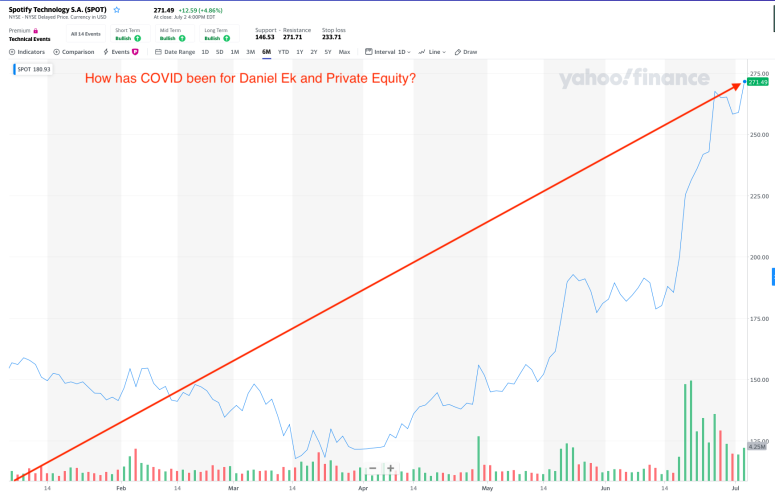