“Who in the room knows Roblox?” asked WMG’s chief innovation officer for recorded music Scott Cohen at the NY:LON Connect conference in January.

Only a few people put their hands up in response. “It’s a gaming platform for kids, and they not only play games, they create their own games and play those games with their friends,” continued Cohen.

“The average age there is between eight and 18. The music business is like ‘Holy shit, that’s our audience!’. There’s over 100 million monthly active users on this platform, and almost nobody in this room has ever heard of it? This is where the target audience is… This is where the kids are. Roblox.”

Music Ally has been reporting on Roblox for similar reasons: its announcement in February that it now had 115 million players and a $150m new funding round (the official figure has since grown to 120 million); its in-world livestream of the One World: Together At Home Covid-19 relief concert in April; the launch of AI-powered music-making game Splash in Roblox in May; and a recent study finding that “half of all children aged 9-12 in the USA play Roblox every week, logging over 1.5 billion hours a month on the platform”.

Here’s the latest news, particularly interesting in the light of Cohen’s comments: Roblox has a global head of music. In fact, Jon Vlassopulos has been there since August 2019, quietly working on a music strategy for the company.

His name may be familiar: in the late 1990s he was working at BMG on business development, including its investment in Napster and (ultimately canned) work building a music service that would mix filesharing, music cloud-locker storage, radio and recommendations. 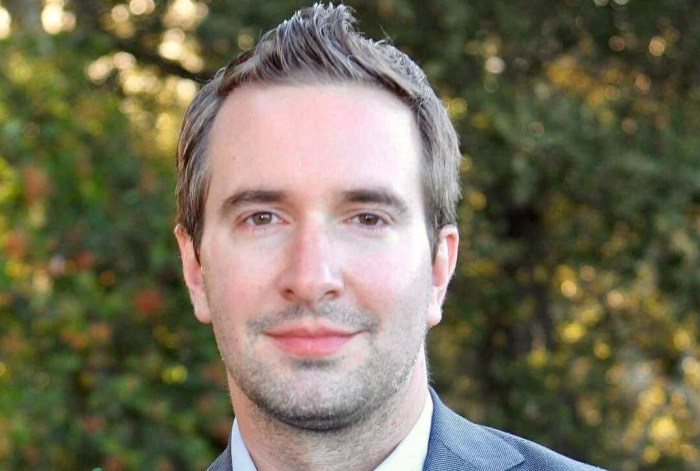 His career since has included running mobile agency Skyrockit, whose projects included a music-remixing app called Romplr; angel investing in last-minute ticketing startup WillCall; founding Tinder-style swiping music discovery app Fab·fm (which Music Ally interviewed him about in 2016) and Tastemates, a dating service based on your music, TV and movie tastes, among other non-music-related roles and investments.

Now he’s at Roblox, with a mission “to embed music in all the natural places across the platform” as he explains to Music Ally, in an interview ahead of his appearance at the New Kids On The Block: Insight into a New Generation event later today, organised by UK industry bodies BPI and ERA.

He outlines several areas with potential, from virtual music merchandise available within Roblox, to making licensed music available to the people creating games for the platform, taking in concert livestreams and Roblox games built by (or for) popular artists.

“That whole notion of a branded world, be it for Billie Eilish or whoever it happens to be,” he says.

“Not just a static website or ‘here’s my page on Instagram or Facebook’. Really to have a magical virtual experience that more expresses an artist’s brain and creativity. Somewhere between a music video, a mini-game and a fan club, all mashed up into one. But also, because we’re not just an ad-supported platform – we’re a commercial platform – they can actually make money from the get go.”

But hold up: some of these are long-term ambitions and others are more immediately possible, for a platform that’s still early in its strategy of working with musicians and the music industry, as Vlassopulos openly admits.

“We’re in setup mode,” he says. The One World: Together At Home livestream was an example of jumping on an immediate opportunity. Roblox created a virtual concert venue where people could gather for a pre-show event, the stream itself, and then a replay of it the following day – including some free branded ‘Global Citizen’ items for their avatars.

“That was a music co-experience in its early incarnation, and on the merch side we did millions and millions of virtual items around the show, for a brand – Global Citizen – that wasn’t massively known beforehand,” says Vlassopulos. “That was a toe in the water.” 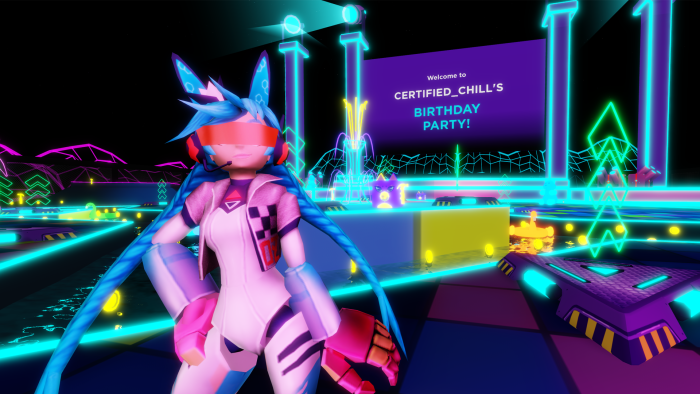 The next toe is music licensing. Roblox has signed a deal with Canadian independent label Monstercat to make a catalogue of its music available for Roblox’s community of creators to use when making games for the platform.

“We want developers to have great music to build games. We want the music to be, not production music, but really great [commercial] music. We’re testing the waters with Monstercat,” he says.

“We’re going to open up that program to more independent musicians and labels who want to have their music available to 120 million-plus kids. Hopefully it can help as a promotional outlet for the artists.”

It’s no surprise to see Monstercat involved: it was one of the first labels to work with developer Psyonix to make music available in its Rocket League game – both developer and game have since been acquired by Fortnite’s publisher Epic Games – and it also has its own licensing scheme for game streamers to use its music on YouTube and Twitch. Working with Roblox fits into that strategy well.

As for Roblox partnerships with big artists for their own games / worlds on its platform, Vlassopulos sees those kicking off later in 2020.

“We want to create these case studies, or open benchmarks. We’ll do something with a big artist in terms of a virtual world, and hopefully people in the industry will say ‘Ah! That’s how I can do that’,” he says.

“It’s the same with virtual concerts and merchandise. We’ll help, facilitate and do some stuff ourselves to get the ball rolling. Labels have their TikTok or social media person now, but hopefully in 2021 they’ll have their Roblox team or their metaverse team. We’re already seeing that with some partners building their virtual world groups.”

Understanding that Roblox isn’t a game, but rather a platform for millions of games built by professional developers and its own user community, is key. Vlassopulos thinks that it’s a good time for music companies to be getting involved.

“In the top 50 games on the platform, there isn’t a music game or even an artist-branded experience. It’s open season for people who want to come on and start building that,” he says.

He points to a game called Piggy as inspiration. It launched in January, and has grown to become one of the top 10 games on Roblox, with more than 4.6bn visits.

“Our top 100 churns pretty quickly: a third will churn every year. Piggy is already a top 10 game, and I genuinely think there’s an opportunity for [music] people who are leaning in: artists, venues, music brands… and we’re ready to help.” 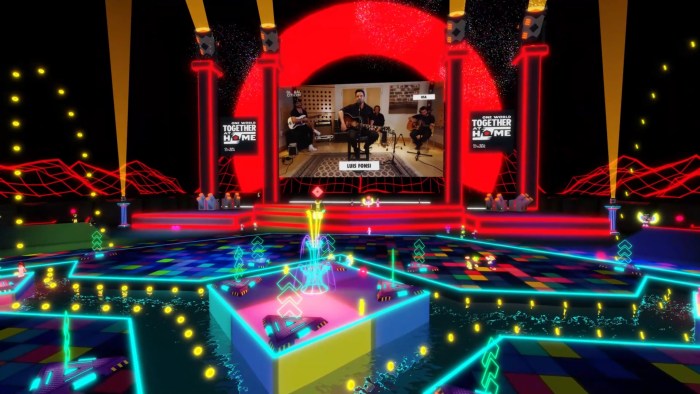 Vlassopulos also thinks that music artists and labels can tap into the game developers within the Roblox community, rather than having to build everything theirselves. An artist could, for example, launch a competition for fans on Roblox to build games using some of their assets: music, artwork and other content.

“It could blow their minds. ‘Here are all my assets, you guys build my world!’. The kids might build the Tokyo version, the French version or whatever they want. Suddenly, as an artist you’ve got 30 worlds, as opposed to taking a year on making your perfect world that you control,” he says.

“We’ll do as much as we can to facilitate those connections. For the top artists, we have an approved set of actual developers that we can introduce them to. But for the lower and mid tier artists, that organic community is really exciting.”

Roblox is known as a children’s platform, but Vlassopulos is keen to point out that it is “ageing up” as those children who’ve been playing it for years get older. 13+ is its fastest growing demographic, and that’s reflected in the kind of partnerships it’s thinking about in music.

He also thinks that there’s a clear crossover between artists at the younger end of the spectrum, and the creative community on Roblox.

“Think about Billie Eilish as an example. If she wasn’t a really popular global superstar, she might very likely be a top Roblox creator!” he says. “It’s a very similar personality: very talented, highly creative, very into technology, and image is key.”

What about licensing? The Monstercat deal suggests Roblox is looking for a limited catalogue of music to make available to users on a royalty-free basis – the kind of library that we’ve seen launched on Twitch, for example.

That’s not the kind of platform-wide, user-generated content licensing deal that big music companies might be hoping for, when they see Roblox’s user stats and funding announcements. Meanwhile, collecting societies are marshalling their thoughts on what live music events on platforms like Fortnite (and by extension, Roblox) in terms of performance royalties.

Vlassopulos says that some aspects of Roblox’s work with music will be simple: virtual merchandise sales for example.

“If there are items to be licensed, they will be licensed, and made available to consumers at a reasonable price, and everyone who should get paid will get paid,” he says.

“For things like virtual worlds, if an artist is going to come to the platform, they would bring the rights and everything associated with it… The smart labels and artists are going ‘this is a platform we should be on and embracing: if our music can be on the top game on Roblox and have 15 million people playing it, that’s got to be an opportunity worth looking at'” he says.