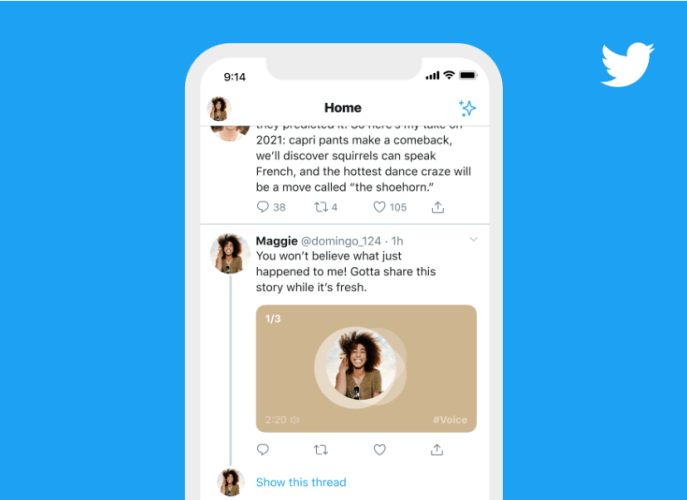 People in Silicon Valley have been getting hot under the collar recently about an app called Clubhouse, which is based on people recording and uploading voice messages. Now there’s more good news for people who love the sound of their own voice, and hope everyone else will love the sound of their voice too: Twitter is launching a similar feature.

“But sometimes 280 characters aren’t enough and some conversational nuances are lost in translation. So starting today, we’re testing a new feature that will add a more human touch to the way we use Twitter – your very own voice,” announced Twitter yesterday.

Voice will be an option within Twitter’s composition screen, for iOS only at first. “Each voice Tweet captures up to 140 seconds of audio. Have more to say? Keep talking. Once you reach the time limit for a Tweet, a new voice Tweet starts automatically to create a thread.”

The flippant response is ‘Oh god, blowhards are going to try to make us listen to their tweetstorms now!’. But there might be some fun stuff in this new feature for artists too. That said, if people start using it to share a cappella covers of copyrighted songs, Twitter may have a new licensing row on its hands…