Fighting a Copyright Troll in Court Can Be Easy, If You Can Afford It | TorrentFreak

The company, known for its popular “X-Art” brand, has gone after thousands of alleged file-sharers in United States courts.

In some cases, the defendants are indeed guilty, but innocent subscribers get caught up in these cases as well. This is problematic as wrongfully accused people find themselves in somewhat of a Catch 22 situation.

Not responding in court is quite risky, as it can result in a default judgment of tens of thousands of dollars. Hiring a lawyer to mount a defense is not cheap either and can easily set someone back $1,000 for some basic paperwork.

This leads to the rather ironic situation where some innocent subscribers settle the matter for a few hundred dollars, just to get rid of it. However, not everyone takes this route. Every now and then we see a defendant who is willing and capable to put up a fight.

Tim McManus falls in the latter category. McManus is an IT-specialist who teaches at Fordham University and also runs his company Greenwood Digital. Given his expertise, he wasn’t easily threatened when Malibu Media tried to uncover his identity through the court.

Instead of running away, or going into hiding, he reached out to Malibu Media directly to tell them that they had targeted the wrong person. Not just because of his background, but since he didn’t pirate the files they accused him off.

“I wrote back to them that they shouldn’t try to sue me because their evidence was flimsy at best, that I would use that evidence against them in court, and I would make the court pay my legal fees,” McManus tells us.

This was early 2017 and a lot has happened since. Regular readers may remember the case as we gave it a mention last year. Unfortunately for McManus, his letter didn’t have the desired effect. Instead of dropping the case, the company named him and his company as defendants and moved ahead with the case.

As we often see in these lawsuits, Malibu Media offered to settle the case for over $10,000. However, McManus had no interest in paying anything and went on the offensive. Through his lawyer, he filed a counterclaim for “abuse of process” and requested discovery.

At this point, McManus had no intention of letting Malibu Media off the hook. He spent a lot of money on legal costs and, as promised in his initial letter, he wanted Malibu Media to pay the bills. Even if that meant going to an expensive trial. However, it never got that far.

A few weeks after we highlighted the matter in a detailed article, both parties informed the court that they had settled the case. This was a surprising turn of events, to say the least. 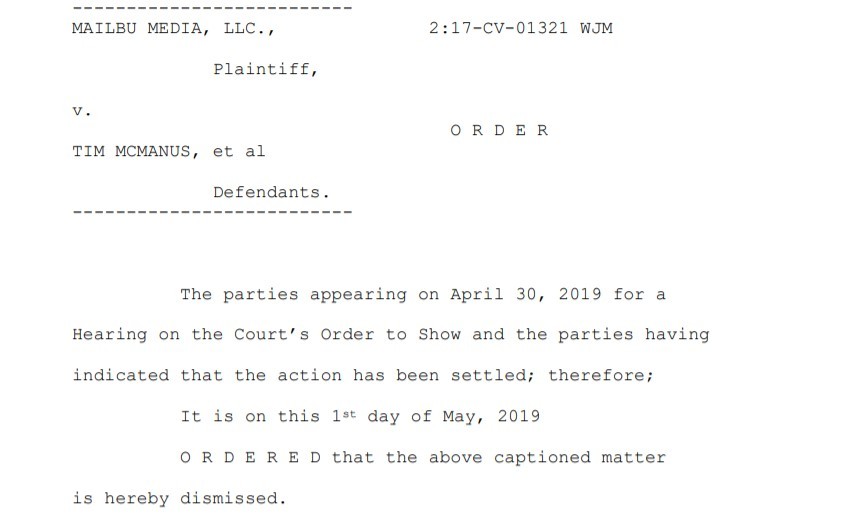 So what happened? We reached out to McManus to hear his side of the story. At least, as much as he could share. He informed us that the case was indeed settled but, due to the agreement, he is not allowed to share any specifics. That said, he is happy with the outcome.

“All I can tell you is that I have an amicable confidential settlement. In my opinion, I was happy with the settlement, or I would not have agreed to it,” McManus tells us.

Based on this statement and the direction the case was going in, it is likely that Malibu Media paid him a settlement amount. What’s perhaps more interesting, is to see if there’s a lesson to be learned for people who end up in a similar position. According to McManus, this is certainly the case. It can pay off to fight back.

“The plaintiff doesn’t want to lose money in these lawsuits, and they don’t want their methods questioned. Anyone who hires a lawyer and fights them will either get a settlement or their case dismissed,” McManus tells us.

McManus says he fought the case out of principle and to clear his name. This was important because one of his students brought up the case in class, which was damaging his reputation.

“I was willing to spend as much money as it took fighting them in court to get a ruling in my favor. I spent a long time creating a good name for myself, I wasn’t going to let some bogus allegations against me damage it in any way,” he tells us.

While many people may have the same sentiment, it’s still a big step to take a fight to court where outcomes can be unpredictable. However, as an IT-expert, McManus knew that the piracy claims wouldn’t hold up.

“All of their evidence is flawed. None of it holds up in court, and most of it will never make it into the trial phase,” he tells us.

“The important thing to remember about the plaintiff is that they parade a lot of technical information in front of the court. The courts are not technical experts, so they admit most of it. I am a technical expert and had the best lawyer in New Jersey to help fight this case. The plaintiff had no chance of winning this case.”

This begs the question: why settle if you have such a strong case? According to McManus, this was mostly based on the advice of his lawyer, who stressed that trial outcomes can be unpredictable.

“She had some very sound advice for me: You never know what is at the end of a lawsuit, and there is no guarantee it will be what you want. Additionally, it would have cost tens of thousands of dollars more to proceed. I had the money, but I thought it was prudent to take the advice of the expert in my case, and that was my attorney.”

In hindsight, McManus has some regrets about taking the settlement as he would’ve loved to “publicly slay the dragon.” Nevertheless, he believes it was the right move at the time.

Looking back, this case makes it clear once again that fighting copyright trolls can certainly be worth it. However, it might not be the best option for everyone, if it’s an option at all. After all, most people don’t have thousands of dollars to spend on a legal case.

If anything, this case is an illustration that the justice system is “pay to play.” People who don’t have the financial means to fight back are at a severe disadvantage. This is a vulnerability some companies are eager to exploit.

This is also what McManus learned. While his case turned out right, someone in the exact same position may have never gotten this far.

“I learned that we do not have a ‘justice system’ in the US. There is no justice in the system. It is a ‘legal system’ that requires money to participate in and accomplish anything. If you don’t have money, don’t expect to get the outcome you want. Like it or not, that’s the truth. That’s what I learned from this experience,” McManus concludes.