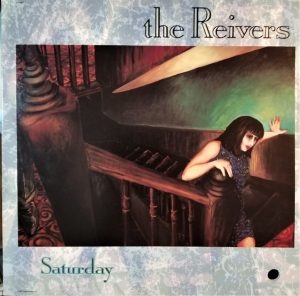 After settling the lawsuit that caused them to change their name from Zeitgeist, The Revivers put out their major-label debut, Saturday, in late 1987. And while it got some decent reviews, it left me kind of cold, which might have been part and parcel of a shitty time in my life, but there you go.

Listen, ragamuffin man
We gotta love you while we can
It’s not enough we go our separate ways

Listen, ragamuffin man
You hold my life in your tight-gripped hands
I sit around afternoons and think of you

Anchored by a violin played by bassist Cindy Toth and supplemented by backing vocals by guitarist Kim Longacre, “Ragamuffin Man” is utterly hypnotic on the verses, and then abruptly changes mood on the stop-time choruses, as Garrett Williams’s drums break out of the steady beat for a bit and do a stop-time all around Croslin as he sings.

And when Longacre joins in on that final “ragamuffin man” it’s total and utter heaven, almost immediately broken by a massive Williams drum roll that restarts the song, letting them do it all over again.

It’s actually a great tribute to a city, I think, calling it “ragamuffin,” and in fact, I almost wonder if Richard Linklater had this song in his head when he filmed “Slacker” in and around Austin just a couple of years later. That said, I didn’t actually know it was about Austin until I did the research for this post, and instead would play it back-to-back with X-TAL’s “Ragamuffin Girl,” which was about a person.

I’ll admit I lost track of The Reviers after Saturday, though the managed two more records, 1989’s End of The Day and 1991’s Pop Beloved, for those who are curious. Oh and wikipedia mentions a 2013 reunion album, called Second Story, as well.