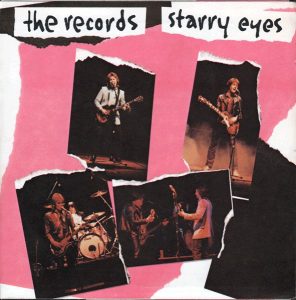 Yes, I know that the first album by The Records was called something else in the U.K, but I’m pretty sure I first heard “Starry Eyes” in the context of their U.S. debut, having no doubt reading raves about the song for at least a year.

Written by drummer-lyricist Will Burch and singer-guitarist John Wicks — who sadly passed away in 2018 — “Starry Eyes” is one of those songs that you hear once and remember for the rest of your life. Instant and enduring love.

“Starry Eyes” starts with a build, a build that feels like its been happening forever, but you’re only now discovering, with Will Burch pushing higher and higher while Wicks and lead guitarist Hue Gower circle around him expectantly, and then, all of sudden, probably when they hit the eight mile mark, Gower transforms the song with an absolutely stunning riff. When I first heard that riff in 1979, it absolutely lit up all of the pleasure centers in my brain that the Byrds had only recently carved, It also leads us directly into Wicks singing Burch’s rant at their ex-manager.

While you were off in France
We were stranded in the British Isles
Left to fall apart amongst your passports and your files
We never asked for miracles but they were our concern
Did you really think we’d sit it out and wait for your return?

Which leads into the chorus, which might have sounded familiar to some British ears, as Wicks had heard Eddie & The Hot Rods equally immortal “Do You Anything You Wanna Do?” on the radio and told Burch that he was gonna to write one of those. Of course a lot of people have probably done that over the years, but Wicks actually succeeded.

It’s a great image, “starry eyes,” — bringing up both drugs and Davy Jones falling in love on The Monkees — and makes a cooly weird juxtaposition to all of the specificity of the rest of the song. Also helping, Wicks double-tracked harmonies throughout and Burch’s double-time snare adding urgency to the last line of the chorus.

After the second chorus, Gower swoops back with the sharp jangle. He’s never doing anything flashy at all, but he doesn’t have to, because it’s just such a lovely sound he’s getting, another juxtaposition with the utter meanness of the verses, especially the final one.

“The writ has hit the fan” is a great joke, especially when sung in Wicks’ near-innocent tenor.

While “Starry Eyes” wasn’t a hit single when it was released in the U.K., in 1978, when it got released here in 1979 it was during weird peak for power pop here in the Colonies, what with Nick Lowe’s immortal “Cruel to Be Kind” almost grazing the top ten and songs like “Tomorrow Night,” “Yellow Pills” and “Rock N Roll Girl” on the radio. Oh, I almost forgot: “My Sharona” was the biggest song of the whole entire year, the only power pop song that will ever do that.

So in this atmosphere, “Starry Eyes” actually charted as a single, making it to #59, but just enough people heard it to make it an eternal cult classic.