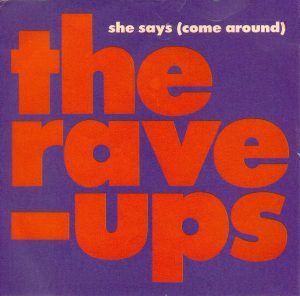 After all of these years, I couldn’t remember anything about the initial time I was exposed to the Rave-Ups, and why — given not just their exposure in Pretty in Pink, but also some of the good reviews they got — given their name and their look, I didn’t get their albums back in the day.

So, thanks to YouTube, I checked out the big song from their debut album, Town and Country, “Positively Lost Me,” and all I could hear was a decent — not great — tune, lost in shitty 80s production. So I either dismissed them out of hand, I guess, like a lot of mid-80s bands who might have had their hearts in the right place but got fucked up by their record companies. And even back when I had all the time in the world, I didn’t have time for that.

Or maybe it was the whole “Molly Ringwald’s favorite group!” hype. Either way, I spent the rest of the 80s not thinking about the Rave-Ups, until I — for some reason?? — ended up listening to a CD called Theodore: An Alternative Sampler in 1990.

I mean, there are some great artists on this CD: Public Enemy, Kate Bush, Living Colour’s cover of Tracy Chapman, etc. But the one that stuck with me was The Rave-Ups utterly great “She Says (Come Around),” which is still pretty slick, but 90s slick, not 80s slick. Which made all the difference.

After a jangly guitar opening, “She Says (Come Around)” trots one of its two great weapons — a churning, repeating guitar riff that continually tumbles over itself. Whether written by head Rave-Up Jimmer Podrasky or one of his henchmen, it’s almost great enough in and of itself, but Podrasky sealed the deal by adding a fantastic chorus, which goes like this: “Come around, come around (she says)”

That ain’t much on paper, but in execution, it’s dynamic, as Podrasky and his backing vocalists turn into a twangy version of the Raspberries or some shit.

It’s so catchy that you might not even notice that it’s backed/augmented with that opening riff, creating such a pure pop 90s moment that after the second chorus, they don’t even bother to sing anything else, breaking it down with a bagpipe solo because why not, and later on a longish guitar solo, but in between they continue to figure out how to do as many variations of the title as is humanly possible, and each one — especially the stop-time one where it’s just the vocals and the riff near the end — is utterly glorious.

According to Wikipedia, “She Says (Come Around)” was all set to be a single and a video but Epic decided to drop them instead, which is too bad, because it would have been fantastic to see a song like this become a big radio song. But it wasn’t to be, and now is basically a footnote to a footnote. A great-sounding one, though.

“She Says (Come Around)”