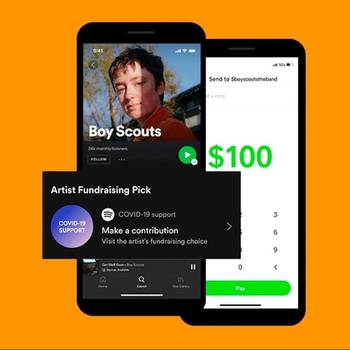 In an effort to alleviate some of the pandemic strain artists are feeling, Spotify recently integrated an artist fundraising feature into its platform. Unfortunately, Spotify has bundled this alongside donations for other COVID-19 relief organizations, siphoning the much needed money away from artists.

It’s never been easy to make it as an artist, and with gigging now out of the picture most are put into an even more precarious position than ever. Living on a shoestring is okay if you feel like your career is making progress, but with everything and everyone in lockdown it’s pretty easy to lose hope when there’s little money coming in. Spotify has tried to bring a little relief to the situation by adding a new feature called the Artist Fundraising Pick, which can help the artist raise money directly from fans for themselves or for a charity. While on the surface this sounds like a great idea, it also offers the artist an unwanted dilemma.

According to Spotify, “. . .this feature enables artists who are interested in raising money to support themselves, their bands, or their crews, to get the word out to their fans on their Spotify artist profiles. We have a strong group of initial fundraising partners: Artists can choose to add a link to Cash App, GoFundMe, and PayPal.me.”

The post goes on to say, “We’ve also created the option for artists to fundraise for an initiative connected to helping those most impacted in the music industry. Artists can select any of the verified organizations participating in the Spotify COVID-19 Music Relief project.”

That’s where the dilemma comes in, and it’s a matter of perception by an artist’s fans. Giving the option to fundraise for a charity puts the artist into the position of potentially looking bad for accepting funds that go towards paying their bills in comparison to other artists that choose to forward it to a cause.

Don’t get me wrong, there’s nothing more noble than contributing money to those in need and it’s something that everyone should do more of, providing they have the money to spare. You’ve got to take care of yourself first though, and most artists are normally already living on the edge, which means they’re really financially under water now. Guilt-tripping them into raising money for a good cause isn’t the best way to go here.

Now I don’t think for a minute that this was ever the intention of Spotify, but sometimes good ideas have unintended consequences. Most fans think that artists (especially those signed to even a small indie label) are much better off financially than they are. A fan that likes an indie artist’s music as much as that of a superstar many times equates them as equal, even though one lives in luxury while the other is one step away from homelessness.

Probably a better direction that could have been taken is to just open up the Artist Fundraising Pick to only self-funding for the artist. The charity option could have been made semi-privately to superstars through their label reps. It would be clean and keep the donation stigmas at bay. But, we have what we have for now and artists will have to deal with it.

Perhaps this is making a mountain out of a molehill or seeing a problem when there isn’t one, but artist’s, band’s, songwriter’s, engineer’s and producer’s needs are critical, and any funding ambiguity makes it that much harder for them to keep the wolf from the door.

I just hope that fans understand that artists have to survive first before altruism steps in.