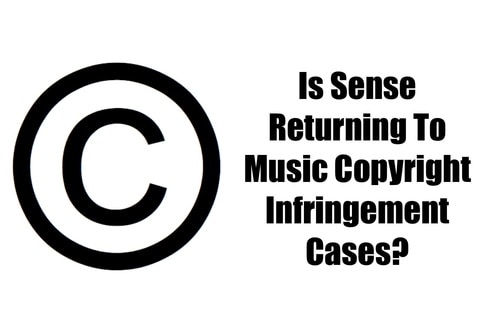 Once upon a time, most of the high-profile lawsuits in the music industry made sense, with the average listener able to detect similarities between songs like “My Sweet Lord” and “He’s So Fine.”

Things were starting to go a little off the deep end in recent years, however, as in cases like the recent Gaye/Thicke controversy. But some the newest verdicts handed down suggest copyright infringement might be starting to make sense again.

Although lawyers and musicologists can argue over the finer points, for the longest time the judgements in copyright infringement cases made sense to the average music lover. It didn’t take an advanced degree to recognize that George Harrison’s “My Sweet Lord” was pretty darn close to The Chiffon’s “He’s So Fine,” or that Led Zeppelin lifted riffs and lyrics from Willie Dixon. Things began to become a little more obtuse in that corner of the music world when The Verve lost an infringement case and all their royalties on their biggest hit “Bittersweet Symphony” to The Rolling Stones “The Last Time,” which wasn’t so much about the song but a small piece of an orchestral arrangement on an instrumental cover.

Can You Copyright That?

Things really began to get confusing when Robin Thicke’s “Blurred Lines” was on the wrong end of an infringement case and appeal to the estate of Marvin Gaye and his song “Got To Give It Up.” In this case the infringement hinged more on the general vibe and atmosphere between the two songs than the actual differences between lyrics and melody (hint: to most people’s ears there is little similarity).

The music world was left aghast over this ruling, and it immediately resulted in changes in how songs were credited. Anyone who is in the room during a song’s creation is now given a credit, and if the song even hinted at a part from another tune, those writers are given credit too. As a result, many current pop songs have up to 20 writers or more credited (not good for the writer’s publishing income, by the way).

But finally there is some indication that sanity may be returning to the courtroom when it comes to music copyright infringement. The first case on the road to common sense has Led Zeppelin winning in a lawsuit then the appeal brought by the estate of the late Spirit singer/guitarist Randy Wolfe over the opening chord sequence to Zep’s “Stairway To Heaven” being lifted from Wolfe’s “Taurus.” One has to wonder that if the similarities didn’t bother Wolfe enough to bring a suit while he was alive then why would it matter to him after he passed?

Next up was a judge overturning a decision against Katy Perry’s “Dark Horse” brought by an artist known as The Flame over his song “Joyful Noise.” In this case it wasn’t so much that there was a similarity between the two songs, but that the part they were fighting over is so common that it’s not subject to copyright in the first place.

It’s hard to shed a tear for a music superstar losing a lawsuit or cheering when they win one, but how about a bunch of high school students? This one hits close to home because it happened in my home town of Burbank, California. A company called Tresona Multimedia, LLC sued the Burbank High School Boosters, BHS vocal music teacher Brett Carroll and several Booster Association parents for copyright infringement over the use of pieces of popular songs that the BHS choir used during a fundraising concert. The court originally sided with the school in the initial lawsuit, and an appeals court sided with it yet again recently. The 9th Circuit Court found, “This use was not of a traditional commercial nature, but rather for the nonprofit education of the students in the music program.”

This is a feel good story if I ever heard one, except for the mental anguish and time that the people of Burbank High School had to endure. I get it that a copyright holder is trying to protect it rights. Publishers and songwriters deserve to get paid and I don’t think anyone questions that. Suing a school over a fundraiser is not going to make you many friends however.

The bottom line is that common sense now seems to prevail when it comes to music copyright infringement cases and it’s about time. May it continue this way for a long time.