For the last few years, LA-based startup Pex has been quietly scanning, fingerprinting and indexing every single piece of audio and video uploaded to open, public-facing platforms. It has accrued a whopping database of 20 billion data points, and – perhaps – know what’s happening on certain platforms better than the platform itself.

Music Ally spoke to Pex COO Amadea Choplin, who previously worked for French video platform DailyMotion, about how important music really is to YouTube and the accuracy of its revenue maths; Article 17; and how Pex can unlock revenue by peeking inside streaming’s black box.

What problem does Pex solve?

Tracking an artist’s music on Spotify and Apple Music is simple enough. But it’s harder to track a landscape of endless remixes, remakes, 15-second fan challenges, and music used by YouTubers as another ingredient in their endless #content churn.

And, Choplin says, it does it “far beyond what the market currently offers. We only need one second of a song to make a match, and Pex can handle distortions, a certain amount of pitch or speed changes, and remixes.”

For comparison, Choplin claims that YouTube’s own ContentID system needs about ten seconds to identify matches of music and video, and that Pex is finding lots of music that YouTube is missing, and then “helping people monetise these opportunities.” 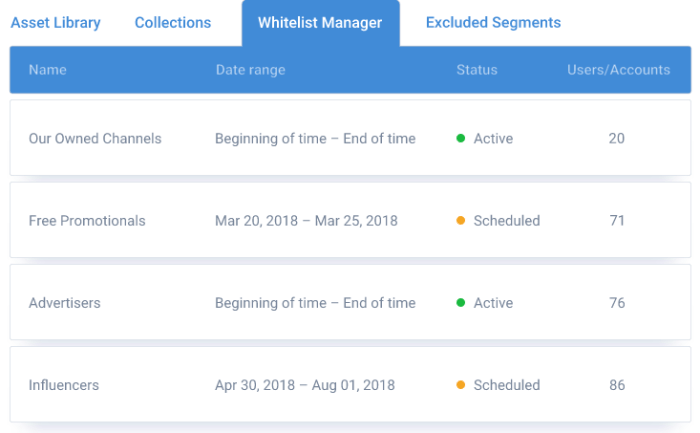 How does Pex work?

On an industry level, streaming revenues continue to grow impressively, although a deceleration in that growth may be an incentive for rightsholders to be exploring any potential pool of new (or rather, undiscovered) revenue.

Pex is offering to do it on their behalf. Consider the many tiny snippets of music used in niche fan videos, remixes and DJ sets: alone, they may not be worth a fortune, but together they might add up.

At the moment, that money can slip between the gaps, says Choplin: “We find enormous amounts of content that built-in systems miss – maybe three times what YouTube finds. That doesn’t mean they’re all piracy – they can be fan videos, for instance – but you can still monetise them.”

Pex also helps KPI-hungry marketing teams track use across different platforms, pulling data into one place, with some interesting insights: “How many listens has your song had on wedding videos, for example?”

In one of the more consequential purchases of the year, Pex just spent (at least) $25m on the rights-management and distribution platform Dubset, attracted by, Choplin says, Dubset’s “tremendous relationships” and their licensing of “very impressive catalogue.”

Pex now has access to a huge catalogue of music (50m+ songs) and, as music use in user-generated content (UGC) starts to play an increasingly significant role for platforms like TikTok, the true value of this purchase will soon become clear.

How is Pex working with the music industry?

Pex is already working with all the major labels. Anyone can register their content with the company, and Choplin says that it is keen to connect with UGC platforms. There’s a reason for this: with the implementation of the EU’s Article 17 looming, Pex is offering to solve the problem of platforms’ responsibility for what is being uploaded.

There has been plenty of debate about whether the new copyright legislation will have a “chilling effect” on the internet – that free expression could be curtailed if platforms scan – and err on the side of caution in terms of blocking suspected infringement – during the upload process.

You, the Internet user, have lost a huge battle today in Internet parliament. The free and open internet is being quickly handed over to corporate giants at the expense of ordinary people. This is not about helping artists, it is about empowering monopolistic practices.

Choplin takes a pragmatic view on this issue, from the perspective of an artist trying to protect their music. “We are now starting to work with platforms to scan on the upload side – and then to clear, license or block content depending on the copyright holders’ wishes. Concerns [about Article 17] are not about technology, but more about the business rules and best practices around it. We respect fair use – in a way that can be efficient,” she says.

We live in a post-remix world, where everyone samples everything else. One argument against Article 17 is that it impinges on true creativity, in a world where artists themselves are often creative magpies, sampling anything and everything. Does Pex believe in artists’ freedom to create?

“Absolutely, but a creator who uses someone else’s work should use it in the realms of other people’s copyright. Right now, it’s creating a lot of frustration, because current filters can take a long time. Pex’s is instant – so if you upload a video of you singing along to a Rihanna song, you’ll know immediately if she doesn’t want it used. People who don’t maybe understand copyright law can be better informed as a creator,” she says.

The flipside to this new clarity is that a hypothetical, unofficial, unlicensed remix of that Rihanna song may never be heard as it could be nixed during upload.

Choplin is keen to stress the benefits of Pex’s Attribution Engine in a post-Article-17 world for smaller labels and catalogue owners, who “know there are copies of their songs somewhere, but where are people listening? Any artists can register their music with Pex for free and get control back: they can monetise that in the way they choose.”

Indeed, the ability to scoop up instances of a song’s use that YouTube may have missed could be of interest to smaller labels – as recently reported on Music Ally, one “mid-sized indie label” found that YouTube Content ID matches accounted for 51% of its streams – “but only 6% of revenue, at a per-stream rate of $0.00022.”

Pex thinks that these figures leave a lot to be desired.

“84% of all videos contain music… the percentage of ad money that YouTube pays to music rights holders should be higher,” says Choplin.

YouTube recently revealed that the streaming service paid $3bn to the music industry in 2019 from ads and subscriptions. It’s a figure that Choplin thinks could be higher. 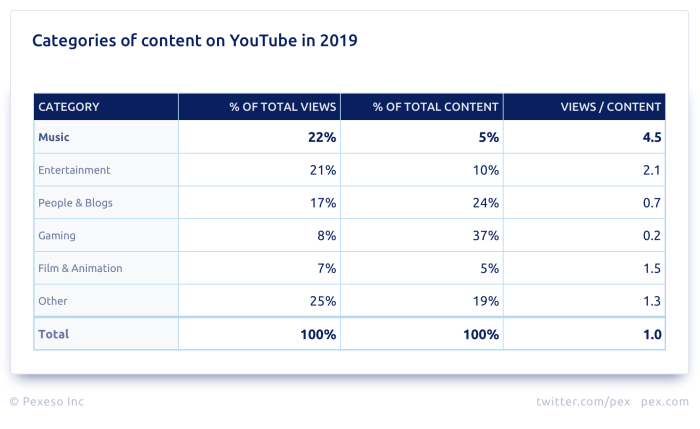 YouTube boasts of “a billion users engaging with music,” and the service is a 15bn-a-year ads business – so should it be paying more for using that music?

Choplin thinks so: “At least 22% of their ad revenue that they share should be going to music. But we discovered that 84% of all videos have music in them, and while not all of that music is monetiseable, the percentage that YouTube pays to music rights holders should be higher.”

Music Ally suggested to Choplin that YouTube’s $3bn payment was not a simple $1bn to each major: “So what did YouTube consider to be “music”, and how did the money end up being split? YouTube didn’t disclose who got the bulk of this $3Bn.”

‘Respecting copyright does not lead to censorship’

The answer, Choplin thinks, is more transparent reporting. Only a thousand or so accounts, Choplin thinks, have access to ContentID – YouTube’s in-house content-matching system – and only a few of them can initiate claims on videos they find outside of ContentID’s own reporting.

“My personal opinion is that there should be some proportionality between the revenues YouTube creates and what it then pays out to creators and rights holders. What I see is that it’s not as fair as it could be. To YouTube, the most profitable category is music – it’s cheaper to store and stream music compared to long gaming videos, and music videos are the ones with the most views on average.”

Pex, she says, helps larger catalogue holders understand their “actual” market share across all videos on multiple platforms, which then helps them negotiate licenses. “This kind of data should be available to everyone.”

Away from YouTube, if platforms without licensing deals say that they don’t know what music is on their service, what does that mean? “Of course it’s deliberate ignorance,” she says.

Choplin doesn’t believe that Article 17 will lead to the mass-disappearance of music. “Twitter is not going to say “no video on Twitter” – it’s a massively profitable revenue line for them, like any platform. Respecting copyright does not lead to censorship. It just has to be done well.”

Pex is currently seeking to develop relationships with: rightsholders of all sizes and user-generated content platforms