Israeli startup MyPart aims to use AI to turn the long tail of music catalogues into revenue streams that humans may have overlooked.

In fact, the company wants to do more than analyse music and pull the needle from the haystack: it wants to pair the songs no human would consider with artists who never knew they needed them.

Don’t be fooled by MyPart’s slightly vague online presence, which seems at odds with its high profile and experienced advisory board, notable award wins, and membership of the Abbey Road Red accelerator.

Music Ally spoke to co-founders Matan Erez Kollnescher and Ariel Toli Gadilov, as well as MyPart president (and former president of Geffen Music and Interscope Music) Ronny Vance about the company’s ambitions. If its technology does what it says, MyPart will have built an A&R system that scoops up and analyses songs at the top of the funnel then, at the sharp end, allows anyone who needs a song to discover exactly the right one to use.

For Kollnescher, AI-powered hyper-relevance is the core of the business: “One of our main beliefs – and one that brought Vance in – was that there’s no good or bad, only relevant or irrelevant. A great song for Dua Lipa might be horrible for Billie Eilish.” 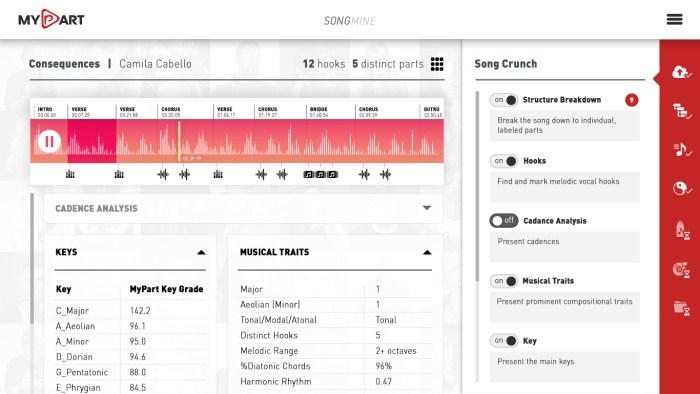 How does MyPart work and what problem does it solve?

MyPart has a real-world need: catalogues are bulging with great songs that never find the right home, and connecting the perfect artist to the right song is an imperfect science. Songwriters can spend as much time hustling to keep their compositions in their publisher’s mind as they do writing songs. And in 2020, where there’s a flawed human system, there is an AI waiting to supersede it.

Kollnescher argues that the existing process of discovering and exploiting compositions is fuzzy and imprecise: “Whether I’m a music publisher trying to use my assets, an A&R trying to find songs for artists, or whether I’m an aspiring artist looking for songs – curators need a platform to find songs.”

The guided demonstration that Music Ally saw indicates that MyPart may offer the kind of granular analysis and song discovery that could make a difference.

Kollnescher is leaving the current system of catalogue navigation, song-tagging, for others to fix: “MyPart is for the post-tagging world, where you search for songs with other songs, or use software to deeply analyse the lyrics or composition.”

Unlike other AI analysis services Musiio and Cyanite, there’s no publicly-available portal to try out MyPart’s analysis, although it’s opening up more widely later in 2020. One service is live already though: songwriters can upload their song to the company’s ArtSource portal, aim it at an artist from UMG’s roster and wait for unexpected success – if the AI recommends it to the artist’s team.

What is MyPart’s technology?

MyPart has a proprietary AI – Songmine, launched in late 2019 – which does what most music-analysis AIs claim to do: scan songs to interpret melody, lyrical sentiment and song appropriateness, before spitting out data to be pored over via MyPart’s SongCrunch web interface.

As the screenshots in this article of a new beta release (currently available to select clients) show, the data does seem to be very nuanced. But while identifying internal rhyming structures in a song is useful, SongCrunch also shows which words, emotions, styles, melodies and structures are common across a group of songs, or an artist’s body of work.

To do this, a user submits a series of songs to teach the AI a “benchmark”, and then discover new songs based on it. Justin Bieber’s team, for instance, could train the AI on some Bieber classics – and receive suggestions of songs most likely to have the feel, lyrical content and style that his fanbase associates with him.

Artist teams can also signal a preferred shift in style by compiling a second benchmark of the type songs they would like their artist to sing next. If it works, this feature could potentially help artists to navigate the treacherous waters of the mid-career direction-change – where committing to the wrong choice can send a sparkling career into a funk.

This set-and-forget benchmarking, Kollnescher believes, “is a game-changer. It’s your search, defined by you, and the system knows what you’re interested in.” All the artist team needs to do is wait for the new songs to arrive.

Music Ally was given access to a beta build of the MyPart Mobile app which cross-references the benchmarking and analysis of SongCrunch with songs submitted to the company’s suggestion engine ArtSource (which is “the bigger dream, and our focus now,” says Kollnescher).

Vance says when he spoke to his old colleagues in major labels and publishing about MyPart, they were eager for the new options the technology could uncover.

“Every one of them said, ‘sign me up!’ – I’m not kidding. If you work with a big artist, you may go to the same 20-30 songwriters again and again – but with MyPart you can push a button and hear a new selection.” 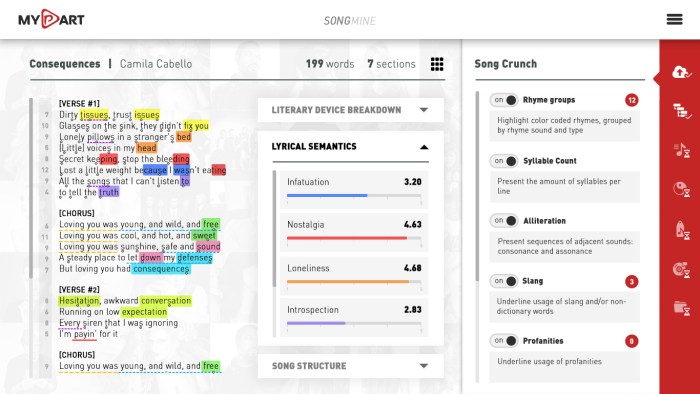 How is MyPart working with the music industry?

MyPart’s value hinges on whether the AI can dig deeper and find more, better songs than a human and the company has taken some steps to test its systems.

In 2019, MyPart partnered with MySphera, a paid service that promotes music to tastemakers (both companies share an advisor in Fluet), as well as working with established Israeli pop stars in order to find suitable songs from unknown songwriters.

In the near future, MyPart will offer B2B services for catalogue owners and digital distributors who control over 10,000 songs – “the point,” Gadilov says, “where it becomes challenging to know every song you own.”

According to Kollnescher, MyPart is “working with three major publishers, one of which is Universal. We’re under NDAs with the others but we are working on integrating as much catalogue as possible.”

Kollnescher also mentions a B2B product to compliment streaming services’ technology – “DSPs are doing a great job but we are not sure that their technology, while sophisticated, can analyse lyrical and composition as deeply as ours.”

At the moment, on-demand streaming skews towards songs released recently – meaning there are many decades of tried-and-tested hit songs waiting to be discovered by users. Gadilov says DSPs are already on board to rebalance this catalogue value-gap.

“We’re under NDA with three streaming platforms and they are very interested in digging into catalogue. We can help make their recommendation engine even better – finding those “unknown unknowns” for users… or as suggestions for manually-curated playlists.”

For songwriters, the democratisation of access to the big leagues, and the chance for anyone to be a “real” hit songwriter, is alluring.

The list of performers to whom anyone can submit songs via MyPart’s ArtSource sounds improbable: Dua Lipa, Bruno Mars and Aerosmith are normally out of the reach of us mere mortals. “But that’s the point,” says Vance, “they’re not any more.”

Vance gives a practical example of how using AI could change the way catalogue is used: “Tommy Sims was a songwriter I found in Nashville and he went on to write “Change the World” for Eric Clapton. If you go into the catalogue, you’ll find half a dozen [unrecorded] Tommy Sims songs that are fucking brilliant – but if you’re a young buck at Universal Publishing, you won’t know them. So when you supply the MyPart benchmark, the Tommy Sims song could fly out at you.”

Vance thinks that when MyPart’s partners are announced, composers will be pleased. “There’s a world of disenfranchised songwriters who will trust what we are doing with the validation of the companies we will partner with in the coming months.”

How does MyPart make money?

For its B2B products, MyPart will ask for a one-time integration fee, and then a monthly license fee, which will slide according to catalogue size.

Kollnescher thinks catalogue owners will see the value from a Darwinian perspective. “The people who have most to gain are those with valuable catalogues. We want the publishers to be able to best utilise their content and the best – or the most fitting – song to win.”

For songwriters dreaming of a superstar partnership, MyPart’s terms and conditions say the company will act, “as agent, publisher, and representative” when they upload work, and, the team explained, if their song is chosen, they will help songwriters reach a publishing agreement with a publishing partner. 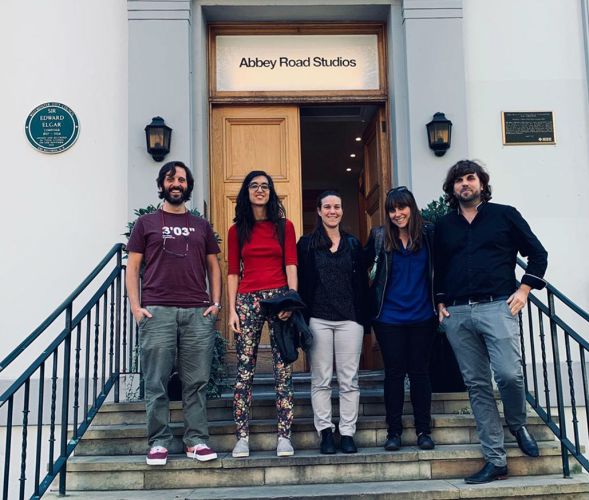 MyPart’s success hinges on three big ideas aligning: the believability of the AI’s suggestions, the idea that every songwriter in the world has one incredible song that’s perfect for someone, and being able to sift and match quickly through the type of long-tail music catalogue that overwhelms us puny humans.

If this does work, the value of MyPart is clear for all parties, particularly songwriters who have watched in horror as their treasured songs disappear into the Publisher Catalogue Memory Hole, never to be seen, synced, or suggested again.

One key question: will the “lost classics” really rise to the top? “Most fitting” does not necessarily mean the “greatest” songs”, so will beautiful, less-commercial songs remain submerged in a catalogue of millions? Or will they finally find their niche audience?

As always, AI drags existential questions into daylight: it might be more cost-effective to use an A&R-AI to scout for new songs instead of an endless churn of interns, but if entry-level employees don’t wade through thousands of dreadful songs, will they be able to identify the good ones?

It’s easy to get swept away by the promise of new technology, particularly ones that promise to be smarter than us. But the obvious problems that face anyone seeking the right song from a catalogue of millions, mean that if MyPart only manages to streamline discovery, it will have succeeded. And if it really starts to pull musical rabbits out of the hat, we all stand to win.