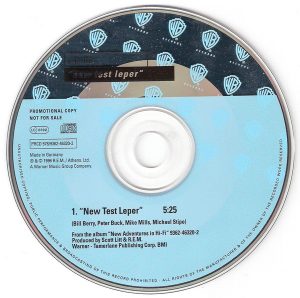 New Adventures in Hi-Fi, R.E.M.’s final album with Bill Berry, in a lot of ways, was their loosest. It’s also one of my favorites.

When they were a touring band in the 1980s, R.E.M. had always written and debuted songs on the road. That was just their way, and while Out of Time, Automatic For The People and Monster were — with a couple of exceptions like “Belong” — totally and utterly studio creations, they decided to record an entire new album while on the road.

This, of course, wasn’t a new thing: Neil Young and Jackson Browne had done similar things in the 1970s, and Robyn Hitchcock had done it with a couple of tracks on Element of Light. And so the vast majority of songs on New Adventures in Hi-Fi were recorded on their 1995 Aneurysm tour — during the shows, at soundchecks, in their dressing room — and a few more were recorded in a studio in Seattle.

The result was their most disjoined album since Green, with Monster-like cage rattlers rubbing elbows with gorgeous songs that would have fit just fine on Out of Time, the most gorgeous of which just might have been “New Test Leper,” where Stipe is singing in character as a guy on a talk show.

I can’t say that I love Jesus
That would be a hollow claim
He did make some observations
And I’m quoting them today
“Judge not lest ye be judged”
What a beautiful refrain
The studio audience disagrees
Have his lambs all gone astray?

With Stipe singing in a softly resigned voice Peter Buck mixing electric and acoustic guitars, Bill Berry keeping a speeded-up waltz-time and an agreeably busy but hooky bassline from Mike Mills, “New Test Leper” is R.E.M. in full-on pretty mode, and yet there’s enough frisson happening to keep things interesting, especially on the chorus, which is augmented by what sounds like either Mills playing the organ through a Leslie speaker, or Buck playing his guitar through said speaker.

Also helping, a guitar solo from Buck that is so low-down it almost skirts under the rest of the song, and several drumless bits, one of which is just a verse featuring Stipe with an acoustic guitar, another featuring feedback-laden guitar noise, and one during the a chorus. That’s what’s cool about “New Test Leper:” they’re continually fucking around with the instrumentation and arrangement, adding complexity to a song that had they played it straight, probably wouldn’t have worked as well.