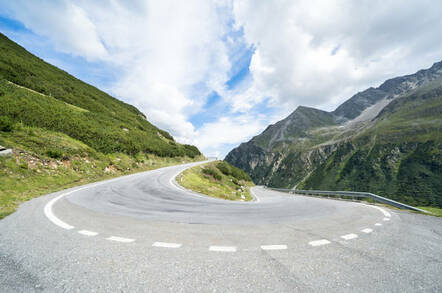 Mountain road with 180˚ turn on Fluela pass, which connects Zernez and Davos in Switzerland

The World Economic Forum is pinning a sustainability badge on its 2020 conference, which, according to one estimate, will produce 18,090 metric tonnes* of CO2 in private air travel alone.

But Christian Klein, co-CEO of enterprise application behemoth SAP, will not be contributing this year, something the German software maker has been keen to highlight.

Klein, who along with Jennifer Morgan succeeded Bill McDermott as joint bosses of SAP, travelled the 430km journey from corporate HQ in Walldorf, Baden-Württemberg, Germany, to Davos in Switzerland, a trip of about five-and-a-half hours including snack and comfort breaks, in a hydrogen-electric hybrid car.

The vehicle, a Mercedes GLC F-cell SUV, produces zero emissions at the tailpipe, though you would need to drive one quite far before you offset the carbon dioxide created in its production. And its overall eco-credentials also depend entirely on how the electricity and hydrogen fuelling the car were originally produced.

Klein's journey to Davos is documented in his newly created Instagram account. It had 883 followers at the time of writing; that's about six million less than the social media platform's most popular dog. Morgan, on the other hand, has not travelled to the World Economic Forum power-fest that is attended by politicians and business leaders.

Given SAP's newfound interest in all things sustainable, The Reg is curious how far it will go. It currently supports petroleum companies including Chevron, Petroleum Development Oman and Royal Dutch Shell, for example. Aerospace customers include Airbus, the world's second-largest manufacturer in the sector. Still, a customer is a customer, right? ®