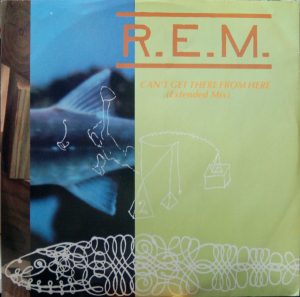 Album: Fables of the Reconstruction of the Fables
Year: 1985

The making of Fables of the Reconstruction of the Fables was notoriously difficult. Away from their comfort zone for the first time, and somewhat unprepared for the damp London winter, they kind of took a dim view of it at first, only coming to realize its strengths when they were able to disassociate the songs themselves from the experience of making them.

That said, it’s kinda ironic that from those sessions was born one of the long-running tropes of their career, the silly/funny song, arriving full-bore in the album’s first single, “Cant Get There From Here.”

With Peter Buck playing almost chickenscratch opening guitar, the Mike Mills / Bill Berry rhythm section getting funky, or at least “funky,” and a horn section tossed in for good measure, “Cant Get There From Here” was a hoot from start to finish, with lyrics that were no doubt a reaction to the angst the band were feeling.

When the world is a monster
Bad to swallow you whole
Kick the clay that holds the teeth in
Throw your trolls out the door
If you’re needing inspiration
Philomath is where I go by dawn
Lawyer Jeff, he knows the lowdown
He’s mighty bad to visit home

But the greatest part of “Cant Get There From Here,” was the contradictory chorus, introduced with a high-pitched Stipe wail and featuring Mills and Berry taking the piss out the entire concept of the song.

At some point the horns join in the fun, and there’s also a long bridge featuring falsetto screams and cool “ahhhhh” backing vocals as well as references to “Calechee” and “Mr Citywide,” all of which feels like a combination of obscure places, inside jokes and utter nonsense. And I wouldn’t have it any other way.

There was also a great video for “Cant Get There From Here,” emphasizing both the weirdness and the sense of humour involved. Given that they’d never really done anything funny in public before like this — while their wit showed through in their interviews and their intelligence showed through in everything — it was like a whole new aspect of their music had been opened up. While not every album would have a song like “Can’t Get There From Here,” many of them did, from “It’s The End of The World As We Know It (And I Feel Fine)” through “Alligator_Aviator_Autopilot_Antimatter.”

That said: it was probably a weird choice to release “Can’t Get There From Here” as the first single from Fables of The Reconstruction of The Fables, and while I remember seeing the video on MTV and the song itself got a lot of mainstream radio play — college, of course, was a given — it didn’t even scratch the Billboard Hot 100, being just too weird for 1985.

“Can’t Get There From Here”

“Can’t Get There From Here” official music video