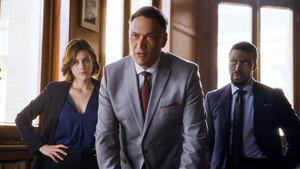 Welcome to Ad Age’s special pop-up TV upfronts roundup. Each day this week we’ll bring you breaking news and some of the best (and worst) of TV’s dog-and-pony show, curated by Jeanine Poggi, senior editor, and delivered directly to your inbox. Get it in your email by signing up here.

NBC prepares for streaming: The peacock spent part of its press call on Sunday discussing how it is preparing for its streaming future. While NBC execs didn’t get into details regarding the network’s over-the-top platform, scheduled to debut in 2020, they say they are doubling down on comedy programming because it performs well digitally. With shows like “Friends” and “The Office,” which originally aired on NBC, as some of the most-watched content on Netflix, NBC wants comedies that are broad, relatable and can appeal to everyone. Here’s a look at NBC’s full fall schedule and programming strategy.

Who runs the upfronts: For the first time, five of the top ad executives leading the sales strategy at the TV network groups that command a lion share of the $20 billion upfront ad dollars are all women. For an hour in early April, these five ladies took the gloves off and sat down together to discuss the loneliness they have felt as women climbing the ranks in a male-dominated industry.

Fancy shoes to fill: In another interview, Laura Molen, who was elevated to president of advertising sales and partnerships at NBC Universal last year (a role she shares with Mark Marshall), also delved into the “messy middle” regarding female employees at career/life crossroads. She also opened up about the pressure she feels taking over negotiations for Linda Yaccarino, chairman of advertising and client partnerships, how advertisers can incorporate Sky into their upfront buys and plans to woo direct-to-consumer brands.

Broadcast by the numbers: So who is on track to win the 2018-2019 season? According to Anthony Crupi, it’s no one. NBC, CBS and Fox are on course to close out the season in a three-way tie, with each network averaging a 1.2 rating over the course of the last 32 weeks in live-plus-same-day ratings. And ABC will be the first network in history to average under a 1.0 rating in primetime.

Renewal drama: You would expect the stars of broadcast TV shows to be relieved when their series is renewed for another season. Well, that wasn’t the case for Constance Wu, star of ABC sitcom “Fresh Off the Boat” and the movie “Crazy Rich Asians.” Upon the alphabet network announcing it is picking up the series for another season, Wu tweeted: “So upset right now that I am literally crying,” along with “Fucking hell.” She went on to explain the tweets by saying that the renewal of “Fresh Off the Boat” meant she couldn’t take another part that challenged her. She called the sitcom “easy” and “pleasant.”

It’s expected ABC will have to answer plenty of questions Tuesday morning during its press conference about Wu’s outburst and the future of “Fresh off the Boat.” But hey, it’s certainly better than what ABC had to deal with last year following Roseanne Barr’s racist tweets.

Ain’t no lie, bye, bye, bye: There was a time when I would eagerly anticipate the dark Friday before the TV upfronts, when shows would discover their fate. Now many of the shows that got the axe (and even some that were renewed), I didn’t even know existed. (The main thing that matters in my world is that ABC renewed “The Bachelor” for its 24th season.)  But here’s a look at some of the highlights:

The number of Shondaland shows is slowly shrinking at ABC with the cancellation of the legal drama “For the People” after two seasons. This leaves three Shonda Rhimes-produced series: “Grey’s Anatomy,” “How to Get Away With Murder” and “Station 19,” which have all been renewed.

Other cancellations at ABC include "Whiskey Cavalier," “The Kids Are Alright,” “The Fix,” “Splitting Up Together” and “Speechless.”

ABC renewed “The Goldbergs” and its spin-off “Schooled,” along with “Bless This Mess,” “Single Parents,” “The Rookie” and “American Housewife.”

Fox canceled its Lee Daniels musical drama “Star” after three seasons. It also gave the boot to “Lethal Weapon,” “The Passage,” “Proven Innocent” and “Cool Kids.” It renewed “The Orville.”

NBC cancelled the comedy “I Feel Bad” after just one season.

CBS has renewed its dramas “Seal Team,” “S.W.A.T.,” “Madam Secretary,” “Bull,” “Hawaii Five-0” and “MacGyver,” along with the comedy “Man With a Plan.” But it is not bringing back its reboot of “Murphy Brown,” or other comedies “Life in Pieces,” “Happy Together” and “Fam.”

Where to go this week: Don't miss any of the parties or pitches. Here’s Ad Age’s handy calendar.