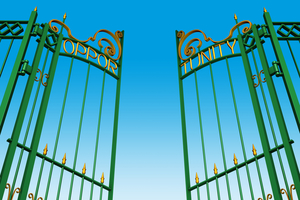 If Dave Gerhardt had his way, those annoying lead-generation forms that incessantly pop up on most B2B websites would simply disappear.

As CMO of Drift, a company that enables live chat and bots for more than 150,000 companies, Gerhardt and his team have a vested interest in connecting sales teams with future customers. But when was the last time you (or anyone) said, “Oh, thank goodness. I can’t wait to fill out another form and receive more emails from a company I barely know.”

When Drift’s chief executive, Dave Cancel, first suggested a gateless approach to content, Gerhardt (like many CMOs) didn’t think it would actually work. He admits that he, well, panicked. But he listened carefully as the CEO pitched “conversation marketing” as an alternative—one that they would use to teach others in the market by example. A year later, Gerhardt is a full-fledged evangelist, knowing that he and the team didn’t give up lead generation but simply redirected it via tech-enabled yet remarkably human conversations.

As CMO, how was it when you first decided to nix gated content and lead forms?
Well, I was panicking when David, our CEO, first came to me with that proposal. He said, “I want you to get rid of all of our lead forms and gated content.” And I almost jumped out of my apartment at the time because it's like, “well you hired me to generate leads and now you’re going to take this away from me. What do you want me to do?”

And his point was: “Look, we are going to go teach the market about a new way to do marketing—conversational marketing—and we can't do it like everybody else, we need to eat in our own restaurant and be able to go show everybody how we did it.”

But you still have a way of capturing leads, right?
Yes. The real answer is that, instead of forms, we're using bots to capture leads. But the big difference is instead of a form submission, it's a conversation. And when you thought of form it's binary, either you fill it out or you don't. With a conversation, we have so many more people that come to our website and say, “Hey, I saw you from the podcast. I have a question: Is your pricing $500 a month? Or is your event tomorrow? Or how do I get to your office?” Everything is a conversation instead of a form submission, which is where all this stuff really starts.

What happens when you make that switch?
There are times that people go from conversation to sale or conversation right to demo, where they get on a Zoom call and do a demo. Of course, you want to get contact information so you can have a conversation with somebody, but what we learned is that the way people buy today—and there's so much data on this. Basically, the concept is more and more people 75 to 80 percent of people are now showing up on a company's website having done almost all of the research that they need to buy. The whole premise is based on that is: If you're showing up with almost all the answers on somebody’s website, why do most websites act like they've never had any information about them out before? Hello there. If you'd like to learn more from us, put your information here.

I noticed that Drift’s bots have a very friendly tone. Do you recommend a more human-like approach with these critters?
We care a lot about copywriting at Drift, and we think about a lot of principles. One of them is: Write like you talk, and say it out loud. Now that you've written out everything, read it out loud, and see if (if you had a brick and mortar store) would it sound weird, or would it be funny and work? I think that's a really simple exercise that a lot of people don't do. And that's the goal of having a bot on your website, is to facilitate those real conversations. So, I think it starts with: Does this sound on brand for us? Does it sound like a robot? The other piece of it is we don't want to use bots to replace humans, so we make it very clear that this is a bot, is not named Dave, and the bot is not pretending to be a Dave. For example: “Hi, I'm the bot. I'm Dave's helper. I can help get you in contact with him. What do you want to know?”

Does that humanness extend to the rest of your marketing? I noticed you discuss empathy in your book.
I'm so glad you found that nugget in the book because, to me, that's the one word that is most important to marketing today. Marketing is about helping people buy, and empathy starts with: What are the good experiences that I have? Why did I love that? And the hard part is, so many times when you have a great experience online, it's nothing like what actually happens with a B2B company.