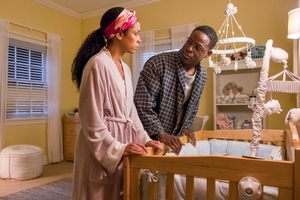 What people are talking about today:
Fans of NBC's  “This Is Us” can rejoice: the tear-jerking family drama is with us for three more seasons. The company revealed in an upfront announcement Sunday that it's renewed the show through season six, but as Ad Age’s Jeannine Poggi reports, there has been no decision made if it will end at that point.

Meanwhile, Poggi says, comedies will be at the heart of the network’s future as it prepares for streaming. With shows like "Friends" now popular on Netflix, NBC wants shows that are "broad, relatable and can appeal to everyone" according to George Cheeks, co-chairman of NBC Entertainment. However, they may not fit the traditional half-hour format: the network will potentially be more flexible with the length of episodes, reports Poggi, in order to work with creators who have been wooed by the freedom offered by platforms like Netflix. Take a look at all Ad Age’s latest upfront news—including Poggi’s interview with five top women in TV ad sale---here, and check out our calendar of upfront events too.

Female athletes slam Nike
Nike has been big on female empowerment in its ads recently, particularly with its “Dream Crazier” spot showcasing Serena Williams' comeback after maternity. But, in this weekend's New York Times several female athletes speak out against the company for its treatment of pregnant women.

US Olympic runner Alysia Montaño tells the Times that when she ran in the 2014 United States Championships while eight months pregnant, she was celebrated as “the pregnant runner” – but privately, she had to fight with her sponsor to keep her paycheck. Meanwhile the article also quotes Phoebe Wright, a runner sponsored by Nike from 2010 through 2016, as saying “There’s no way I’d tell Nike if I were pregnant,” and Olympian Kara Goucher, who had to choose between getting paid to run 120 miles a week and breast-feeding her son. And it points out that the four Nike executives who negotiate contracts for track and field athletes are all men.

Facebook’s Clegg argues against a breakup
Facebook executive Nick Clegg--the former deputy prime minister of the U.K –has spoken up for the first time since joining the company last year to say the company shouldn’t be broken up.  As Bloomberg News reports, Clegg, who is VP of global affairs and communications, was responding to earlier calls by Facebook co-founder Chris Hughes to break up the social network.

In an opinion piece for the New York Times, Clegg makes the point that since Facebook has about 20 percent of the U.S. online ad market, it’s not a monopoly. Instead, he argues, its challenges should be solved through regulation. "We are in the unusual position of asking for more regulation, not less," he writes. It’s similar to what Mark Zuckerberg  said in his Washington Post editorial back in March–which makes us wonder just what influence Clegg is having behind the scenes at Facebook.

More on Clegg: In the U.K. general election back in 2010, Clegg's then-political rival Gordon Brown was mocked for repeatedly saying "I agree with Nick" in a TV debate. The phrase became a political meme and even appeared on merchandise.

Just briefly:
Tariff threat to Apple: Renewed trade tensions between the U.S. and China could threaten Apple's iPhone, reports the Wall Street Journal. While the latest round of tariff increases don't affect Apple products, the WSJ says threats by President Trump of further tariffs could affect virtually all products imported from China, including Apple's most important devices.

Farewell: Victoria's Secret Fashion Show is leaving network TV, reports Ad Age's Ilyse Lieffreing. The show has been airing for almost two decades on ABC and CBS but in an internal memo obtained by the Wall Street Journal, Chairman and CEO of parent company L Brands Les Wexner said the company plans on developing a new type of event instead.

Music and lyrics: Instagram is testing a new stickers feature in Stories, with music lyrics playing out alongside a video, says The Verge. Users can already add music to their stories and this would add the words, too.

Egged on: Plant-based egg substitute Just Egg is tempting people to try its product in a series of pop-up events, reports Ad Age’s Jessica Wohl. People in Chicago, L.A. New York and San Francisco have been able to try recipes such as tostada and frittatas made with Just Egg, which is made from mung bean protein isolate.

Ad of the Day: For Mother’s Day, Google paid tribute to the original voice assistant: Mom. As Creativity’s I-Hsien Sherwood writes, a heartwarming ad created via Swift shows a series of kids calling “Hey Mom” for every conceivable reason, from wanting to know where dirt comes from to running out of toilet paper. It ends with an exhausted mother using Google’s Home Hub to call her own mom for support. Watch the ad here, and in the meantime check out Creativity’s Top 5 campaigns from last week, including a Burger King effort to deliver Whoppers to drivers stuck in traffic jams.